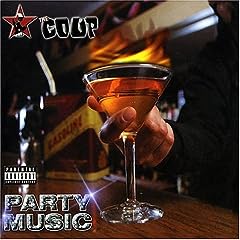 The Internet has been rife with rumors and news of Apple's supposed partnership with the labels and their plans to launch a new "digital album art" format/system/technology. The code name is "Cocktail".

I agree with the concept - digital downloads should have a rich art experience, especially given there's no cost to duplicate. There's just the cost of creation. At a minimum it should be a true digital equivalent of the hard copy, where digital's features (duplication, searching, scaling, etc.) are used to offset its limitations (intangibility)

My plan would look something like this:
In other words, it looks a lot like web pages or a PDF.

Several years ago, one of the major labels passed through Rhapsody and were showing several technologies they were hoping to get Rhapsody and other music services to adopt. They were even contemplating making adoption mandatory for their contracts. One of the things they showed was a "digital album art package" demonstration.

Despite the fact this label had just spent the bulk of the meeting talking about how they wanted to decrease Apple's hold on the music business, they showed their demo on an iPod.

They showed something that was effectively a tiny Flash movie/application, with some animation and a few "scenes". On the iPod's tiny screen it was interesting, but also ridiculous.

Some of the things I noted at the time:
You couldn't do anything with their demo other than "drive around" a bit, and after about a minute of playing around with it, I was uninterested. I couldn't imagine it captivating anyone. The other items above insured it wasn't going to go anywhere.

I don't know if "Cocktail" is close to this. But knowing how slow the music business moves, and the motivations of the people behind it, I suspect it actually is closer to what I've described above than not.

Which means calling it "Cocktail" is perfect - you think it's a good idea at the time, but the next morning your head hurts and you're wondering why you were so stupid last night, why you hurt yourself.

If Apple is also working on a tablet PC/giant iPod/Netbook as has also been speculated, they're doing "Cocktail" for one reason - to help sell new Apple hardware. This new "feature" will appear on a handful of major releases at the end of 2009 and then go the way of CD-I and other formats the industry never got behind (Quad! DVD-A! HDCD! SACD!).

The sad part is Apple and iTunes already offer everything one needs - it is possible to embed multiple JPEGs of nearly any size in MP3 and AAC files. All you'd need to do as the label is supply some high-resolution images, and you could quickly and easily scan your entire back catalog. All you'd need to do as the hardware manufacturer is allow the user to page through those images - most devices can handle this at some level.