This blog asked the question “Why don’t musicians demand more money from clubs?” He notes that the amounts being charged at the door have, if anything, decreased over time; and that the monies paid to the bands have stayed relatively flat ($50-$100).

He wonders why he can’t get paid more for doing his job. In my experience, this is not a complaint limited to the music business.

Too Much Music
I think the answer is simple – it’s a supply-and-demand issue. While most cities have a large number of music venues, there are many more bands than venues. Most bands will play anywhere on any bill at any time.

In the worst situations, the economics get so bad the clubs can actually charge the bands to perform (known as “pay-to-play”). This sort of thing comes and goes in some of the major cities (Los Angeles being most notable).

Club owners don’t have to offer most bands any (more) money, because the club owners recognize any specific band needs a night at any venue more than any specific venue needs a night with any band. Especially local bands with uneven material and no following to speak of.

The result is that musicians have no leverage when it comes to demanding more money from the clubs.

Most of it stinks
There’s just too many bands. And most of them aren’t very good. I’ve been going to shows since the late 20th century. The bands have not improved much...they’ve just gotten a lot louder.

The quantity “issue” is not addressable, nor should it be. I like that there are plenty of musicians out there. I just wish they were better at what they do. And by that, I don't mean some nebulous definition of "good music". While I am mystified by the hype surrounding bands like No Age, I'm also perfectly willing to posit that I "just dont' get it" because "I'm old."

That said, here are common mistakes club bands make:
Learning from Cover Bands
A good example of what works is looking at the successful cover bands in your area. As someone who’s done time in both original and cover bands, I can tell you that cover bands (playing in and watching) are usually far more fun for the audience.

Good cover bands:
Thus cover bands can play almost any club in almost any city and walk out the door with hundreds (even thousands) of dollars in hand. They know their audience and know their job is to entertain.

Tribute bands are a whole other bizarre game.
at May 15, 2008 No comments: 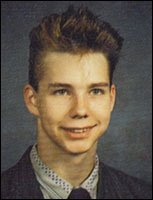 Off to DC again tomorrow for a second attempt at testifying for the copyright board. More details after it's all done. For now, just enjoy my senior yearbook photo. 1987, baby!
at May 11, 2008 No comments:

Email ThisBlogThis!Share to TwitterShare to FacebookShare to Pinterest
Labels: Travel


My brother is one of the members of this fantastic space-rock band (he's the guitar player in the hat at the end).