Life continues to surprise and change.
This is a somewhat funny thing to think after life has been nearly the same, day after day, for 4 months. The pandemic feels like something I have been mentally and physically preparing for, but it is still a challenge.
I wake. It's 8 am, or thereabouts. I lay in bed, relishing how relaxed I am, my leg and back blissfully free of complaint for the moment. I think about my plans.
I am 51 today. Who would have thought it would look like this? 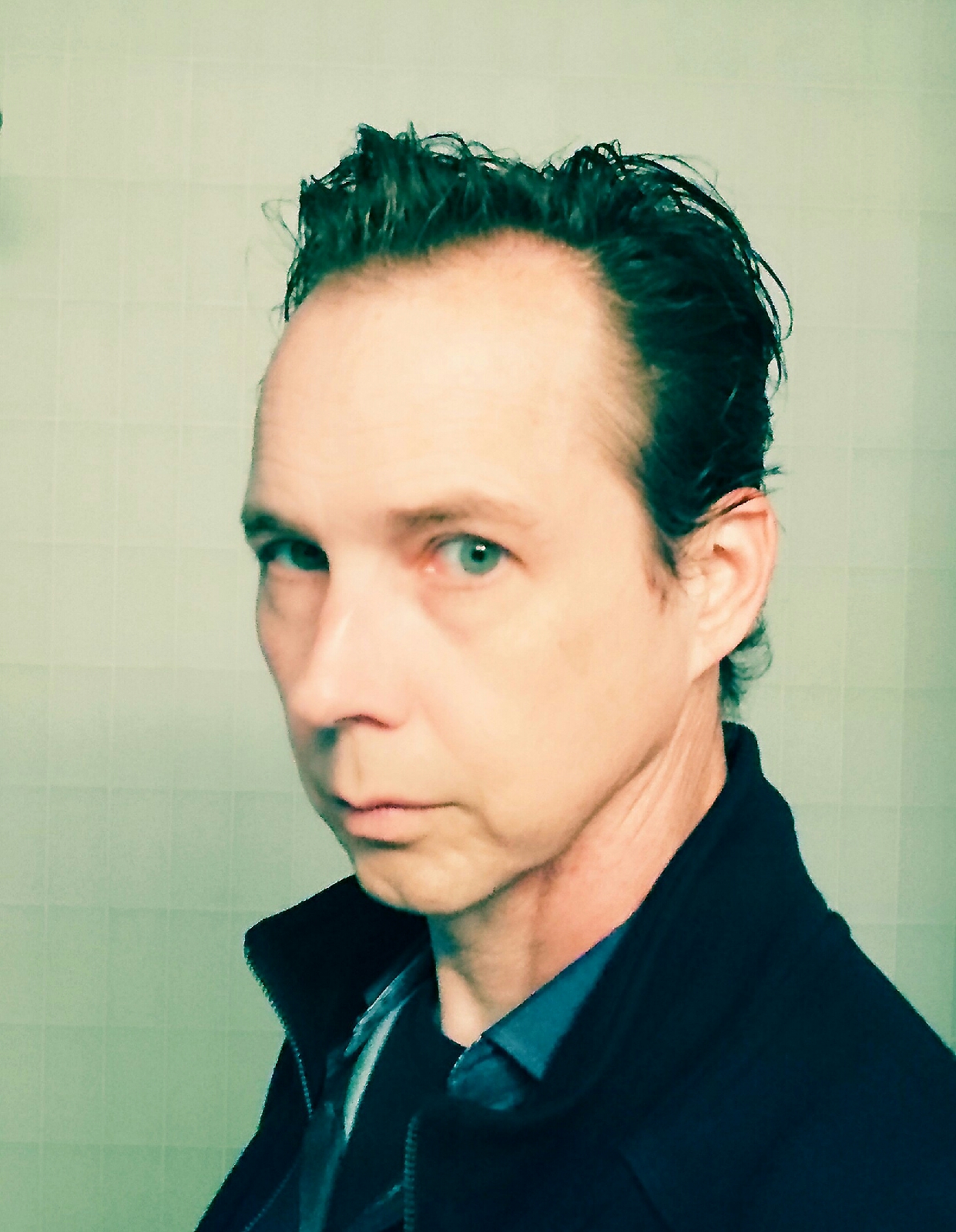 I don't just mean the physical aspects, of course. My hair hasn't been this long in at least 20 years. I mean the bigger picture. I don't really know what I thought life would be like at this age, whether forecasting from my teens, my 30s, or even last year. But I never imagined any of this.
I put on some music while I drink a coffee. I treat myself to some Dynamo donuts. It's only this day once a year, and only this specific day once ever. Recent events have reminded me you need to enjoy the things you like while you can, because you never know when you can't ever again.
I read email, the news, and finally, Facebook, scrolling through birthday wishes. I write in my journal. I ran yesterday, so I don't have to do that today. I put in some laundry, and clean up the kitchen.
I spend the day like I have for the last several months: I work on some music. I apply for some jobs. I play some games. I putter around the house. And I talk to friends.
I scheduled a 2.5 hour Zoom with over a hundred invited people for 4:30. I figure I can have a virtual birthday party. I am pretty sure it is going to be a disaster, if anyone even shows up.
But it is not a disaster. It's actually wonderful. By 4:45, there are 10 people on, some of whom know each other, some of whom do not. People cycle in and out.
I talk to some friends I haven't seen since 1985, 1987, 1990-something. I talk to some brand-new friends. I sing a couple of songs. We catch up. Iran does a live demonstration of how to make her Manhattan.
For someone who has so much personal mythology around being isolated, alienated, and alone, I sure seem to have a lot of wonderful friends. It is an emotional experience, and before I know it, the official end time has passed and we continue for another 30 minutes. Finally, I'm talked out and starving. I bid farewell and shut it down as the sun sets.

I reflect on my life. Nobody is happy about the state of the world. It seems clear there is no going back to what life was like a year ago, or four years ago. The future remains murky. We are all trapped in a kind of long present. Based on what I'm reading, we will be here for a while. If we're lucky.
But I don't mind. If this is my life, I'm going to figure out how to enjoy and appreciate it. I no longer take it as a given that I, or any of us, will be here in 2 weeks or 2 years.
That realization makes every day more special and more precious. This could be the last good one, or the last one. I stay up late, thinking of my friends, squeezing every last moment out of the day.
Maybe I didn't get to see my friends in person, and maybe it was only slightly different from any one of the last 100 or so days. I didn't go out for a fancy dinner, and I only had one drink. I'd still say this was one of the best birthdays I have ever had.
The only profound philosophical insight I can offer this year is "it is good to be alive, enjoy it while it lasts."
Happy birthday to me.
at July 16, 2020 No comments:

One of the many unfortunate effects of the American political right is that displays of traditional affinity for America -- the flag, stars and stripes, and so forth -- almost certainly indicate the person displaying them is a right-wing partisan, which means they have an extremely poor grasp of the values of this country, and a lack of understanding of its founding principles.
It is also unfortunate that the left has turned to a narrative locked into notions and phrasing of American being fundamentally premised on bad actions and ideas. This inevitably leads to a mindset of “burn it all down” rather than “make it better”.
Unlike the majority of Americans, I have traveled extensively and spent time in many other countries. America is neither as perfect and great as the right wing believes it was, nor is it as fatally flawed as many on the left argue.
Paraphrasing Churchill, “America is the worst country, except for all the others”, or as James Baldwin said, "I love America more than any other country in the world and, exactly for this reason, I insist on the right to criticize her perpetually."
***
This photograph captures America in the present moment: 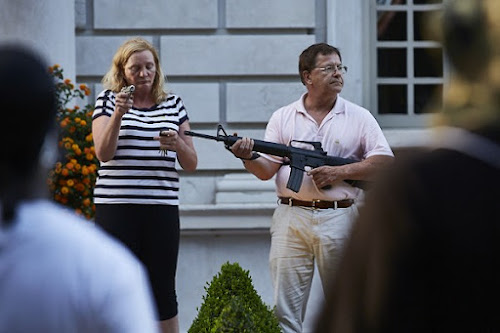 These two right-wing Americans (you can tell, because they’re rich, white, obese, and waving guns indiscriminately) burst out of their replica Gilded Age home (that massive home of theirs is almost too on-the-nose) and pointed guns at the people walking by.
Yes, it is true the protesters were trespassing on a private street in a private community (details that, again, would have been stricken from fiction as too on-the-nose). The protesters were not, however, directly threatening the couple. But the couple were so scared they came running out barefoot, carrying guns.
While it isn’t clear whether or not the guns were loaded, it is clear the couple violated all of the basic rules of gun handling for the entire encounter -- in the various photos, you can see them holding the weapons improperly, fingers on the trigger, not looking where the guns are pointing, and pointing the guns indiscriminately.
This is America, 2020. Scared rich people race out of their Gilded Age palace to threaten people walking by -- people who are protesting, among other things, improper policing. I don’t think the couple in the photo look strong or brave. I think they look pathetic, ridiculous, and laughable.
And if the crowd had turned on them, I suspect they wouldn’t have gotten more than a few shots off before being overwhelmed.
In the aftermath, the couple have become darlings of the American right wing, with loathsome Congressman Matt Gaetz proclaiming to his fellow G.O.P. fans “this is all of us”. Indeed, they are. Scared, reacting inappropriately, living in a lame replica of the Gilded Age, and about to be either passed by (if they're lucky) or overrun by the people.
Part of the problem with this particular slice of the American right is they don’t see a need to protest the government or the police. These aren’t people who voted for Trump out of “economic anxiety”, or overt racism. The system is working great for them, as long as the rabble stay out of their private neighborhoods.
This year, America has come closer to facing some of its major social problems. Trump aside, the previous ways of dealing with and thinking about racism, income inequality, and the relationship with the governments (local, state, and federal) and the people must all be re-evaluated and substantially improved.
I would like to be optimistic. But people are so polarized and dogmatic. I hope we are able to move to a place of compromise and forward momentum.
***
America is big, but we are not the biggest. We are not isolated, no matter how many walls we build. We The People are also just people, like the citizens of every other country.
We breathe the same polluted, CO2-heavy, virus-laden air as the rest of the world. We cook under the same sun. We wade into the same acidifying, warming oceans.
America has done many wonderful and horrible things. Aside from our own internal issues, we must also come to terms with being part of the globe and planet. The current administration has done much to turn us away from the rest of the world, damaging alliances and reputation. I hope we are able to return to the table and become productive global citizens.
I see the same issues at the personal level. It is easy for each of us to focus on our own problems and concerns, believing them to be of critical importance, refusing to acknowledge those around us. There are far more people who aren’t us than there are us. Remembering we are all one people -- E Pluribus Unum, or perhaps a different read of “We The People” -- would do all of us some good.
They call this holiday “Independence Day”, and we think of it superficially as celebrating “freedom”. For some, this seems to be interpreted as “freedom from having to care or think about anyone else”. That isn’t freedom, it is the solitary confinement of selfishness.
The weeks-long fireworks in the wee hours confirm people’s ongoing misinterpretation. Car alarms go off, and NextDoor and Facebook message boards are filled with people insisting they’re celebrating and freedom-ifying, talking about their “stress” at being asked to stay home during a global pandemic. They ignore and belittle the rest of the community, who just want to sleep at night without being woken by explosions.
The pandemic itself is a further reminder and indicator of these issues. The best way to act is a way that takes care of everyone around you, even at some personal cost. If everyone did this, we’d get the virus under control quickly. The governments could and should help.
You know what has happened instead, and the results over the next few months, if not years, will be grim.
None of us are free until all of us are free. We, The People. E Pluribus Unum.
“I love America...I just want everyone to have health care and drive electric cars”
-- Tina Fey
Happy birthday, America.
at July 04, 2020 No comments: