In the Rolling Stone 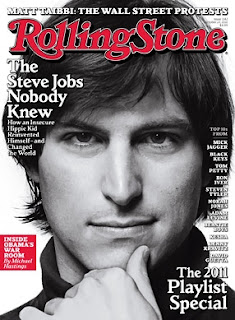 I have achieved a lifelong goal: I'm finally in Rolling Stone magazine.

Appropriately enough, it's in an article about technology, music, and economics - my life in 3 words I guess.

This quote refers to the talk I gave a few weeks ago, and the number in question refers to the "PurePlay" rates. These are what most large "radio-only" webcasters play. Pandora may be paying out something slightly different given their size, but for the purposes of the presentation I gave, it was close enough!
at October 25, 2011 No comments: Links to this post

The Reaction to "Making Cents"

Last Friday, I was in Los Angeles to participate in Digital Music Forum West. I gave a presentation adapted from some of my writings about subscription service payments to artists called "Making Cents".

I wanted to get people thinking, and I accomplished my goal. I've been to too many of these conferences (including this past one) stuffed with uninformative, shilly, boring presentations from dull speakers, or discussions that meandered from stock topic to stock topic, or worse, were empty of any controversy ("Music is great! Who agrees?").

This morning, Dave Allen made a nice, inflammatory tweet:

...derived from his reading of this article about my talk.

Well, actually, I was talking about fractions of pennies! I'm not happy about Dave characterizing my talk as a "bad defense". That's not at all what my talk was about or intended to be. I didn't see Dave at the show, but maybe he saw the talk on the web.

The Fast Company article isn't exactly accurate either. I wasn't interviewed for it, and didn't have a chance to talk to writer Austin Carr. It also leaves out some very important points I made.

You can guess what buttons the author wants to push - there's a big photo of a nice hip band (upright bass! banjo! washboard!...it's even called "610-working-band.jpg") with all the right signifiers (bike in the background! recycling bins!)

As I said repeatedly in my talk, these small amounts don't seem fair. So what is fair?

I could summarize my rather brief talk as follows:


Take a good look at that photo again. You see the band playing. You don't see an audience. If you look to the right, you'll see a bunch of people. With their backs to the band, looking elsewhere. This is what I'm talking about. This is the problem.

Now, addressing some specific points in the Fast Company article:

I strive to create compelling presentations. I am not a bomb-thrower, however. It's easy to shock and provoke, harder to really talk about issues in a serious way. So note some other points I made:

Ultimately I said the same things I've been saying for years: The music business is tough for everyone.
at October 11, 2011 No comments: Links to this post