A while back, one of my co-workers (who is also a serious musician) asked who my "important" guitar influences were. Sure, there are a bunch of people who everyone cite all the time. But on reflection, there are a handful of players who really affected my personal style. I will fully admit that many of them may not be the "originators" of what they're doing, but they were the ones I heard first and most.

The players below are generally not idiomatic "rock" players - they almost all use a combination of tone, effects, note choice, and technique to produce something that can rock, but is usually different somehow.

1. Stuart Adamson of Big Country
Album: "The Crossing". Great textures, inventive sounds, and detailed parts. A guy who eschewed the barre chord in favor of riffs and parts. Ebow! Guitars that didn't sound like ordinary guitars. I am still learning how to play his parts. The first "guitar" music I loved. And I still love it - I listen to his music every year.

2. Edge of U2
Album: "War". Redefined what rock guitar could be. Yeah, maybe he doesn't shred - but that's kind of the point. And he wasn't the first guy to use a delay, but he was perhaps the first to hardly ever not use delay, and to turn it into a signature.

It's not fashionable to like him now, but he created a distinctive sound that left a lot of space, and is now copied by many. Probably not intentional, but effectively crystalized the serious art music "minimalism"of the 70s and translated it into rock music.

3. Eddie Van Halen of Van Halen
Album: "Fair Warning". His playing sounds so easy and effortless that you go "this doesn't seem that hard" and then you try, and of course, it actually is pretty hard. His rhythm playing is underrated, loose, groovy, and funky. He's not just a barre chord + low string thumper. He plays like a classical violinist - all double stops and interesting theory things.

He also had great guitar tone, both distorted and clean. Plus, he actually gave me a guitar once. 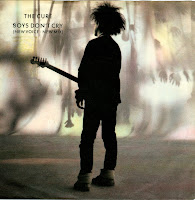 4. Robert Smith of The Cure
Albums: "Standing On A Beach" (cheating, because this is a singles collection)
His sounds were an updating of psychedelia, and his playing evolved from punky minimalism to a fairly specific personal style, incorporating lots of effects, unusual chords and voicings, and rare instruments like the Coral Electric Sitar and the Fender Bass VI.

Also underrated because he doesn't "shred", but he's got more technique than you might think, and he is able to fit his playing into a large ensemble (and probably writes many of those parts)

He's a tasty player, too, knowing how to get the most from a few notes. And for someone not terribly "technical", his playing always felt great.

After listening to these records, I got my Strat back and started a cowboy band.

6. Vini Reilly of Durutti Column
Album: "The Guitar and Other Machines".
A record that made me start thinking about how it was maybe OK to make "pretty" music using the electric and acoustic guitars.

Reilly is another player who blends effects, technique, and sparse note choice to create something truly unique. Made a bunch of records in a very similar vein.

I've never heard anyone play quite like him - some kind of finger-picking and plucking. I still wish I could play like this. I still try frequently.


7. Daniel Ash of Bauhaus, Tones on Tail, and Love and Rockets
His parts were simple - often just 2 strings, or arpeggiated chord shapes with one finger moving. He had a handful of signature tones: his underweight Tele-through-a-Marshall distortion, his Ebow, and 12-string clean parts. From all that, he created a style that served him well for an entire career.

8. Steve Stevens of Billy Idol's band
Album: "Rebel Yell"
Wasn't quite metal, but was as close as I got for a long time. This guy could play like crazy (and frequently did) but wasn't afraid to use technology, layering, and unusual parts and voicings.

9. Michael Hedges
Album: "Aerial Boundaries". I will never be this good, ever. I could listen to the title track for hours. Beautiful, inventive, and incredibly emotional.

A guy with tons of technique, but who deployed it in the service of some very nice compositions. I can't play like this, but his music is inspiring as a composer and as a player.

10. Christian Fennesz
Album: "Venice", "Cendre" (with Ryuichi Sakamoto). A true 21st century guitar player who uses computers to sculpt his guitar into towering walls and pillars of sound. Amazing stuff that made me think about the guitar as raw material for processing rather than just a rock instrument.