50 years ago today, the "moonshot" was launched. My grandfather and father both contributed to the Apollo 11 mission, which remains a unique and shining moment in human history. 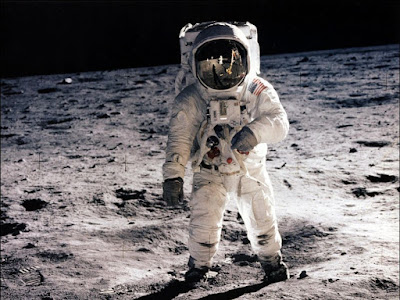 At the time I was born, America still had a telephone monopoly. Telephones had rotary dials. Microwave ovens did not exist. VCRs had not been invented, and there were only 3 major TV networks. No cable TV. FM Radio was just about to displace AM as the preferred listening system. Computers were the size of entire rooms, if not buildings, and were only owned by governments or corporations. A new TV show called "Sesame Street" was about to debut.

Shortly after I was born, Richard Nixon signed the "Economic Stabilization Act of 1970", which allowed the government of the United States to control prices, rents, wages, salaries, and more -- a level of government interference (by Republicans, no less!) that is nearly unimaginable today. My father worked for the Cost of Living Council, which was the agency that handled this policy. That agency was headed by Donald Rumsfeld.

The early 70s were also when the Ecology movement in the USA started. The federal government passed many critical bills aimed at cleaning up our nation's air, water, and soil.

I saw my first computer when I was in 2nd grade, and we had our first home computer (an Apple ][+) about 2 years after that. I grew up with computers, and I have watched them shrink, multiply, and embed themselves in all facets of our lives.

Technology has advanced. Jets are bigger, cheaper, and faster...though the Concorde no longer flies, and was the fastest of all. Computers are everywhere, too numerous and cheap to count. Nearly every modern convenience has become less expensive and more commonplace. I take too much of it for granted, even as I marvel at the latest gear.

Unfortunately, that kind of progress has not extended to taking care of the environment. The end of the 1970s oil shocks led directly to the Big 80s and the return of gas-guzzling cars and the creation of the SUV. The near-disaster at Three Mile Island and the actual disasters at Chernobyl and Fukushima put the world off nuclear power, though countless other disasters at places like the Deepwater Horizon should remind us of the slow death and damage caused by fossil fuels.

When I was born, the global population was a mere 3.6 billion. It is closer to 7.7 billion now. It is hard to imagine any aspect of our lives changing until there is no alternative. Even then, it will take time.

I have seen a lot. I have a hard time imagining what the next 50 years will look like. I hope I get to see some of it.

I am 50 years old. Not that long ago, it wasn't all that clear I would even make it this far. Every day is a gift. I am trying to see it less as a marker and more as a victory or achievement.

Look around you at the things in your life. Find one that's been with you a long time. What kind of shape is it in? Faded? Scratched? Dinged? Broken? Repaired? Worn? Obsolete? In need of repair?

If you're lucky, despite (or perhaps because of) all that, you still love it. You've at least kept it around, out of inertia or fear, if not love and affection.

Our lives are like that. Contrary to much philosophy, we are our bodies -- we cannot and do not exist without them. Those bodies are physical objects, subject to the humiliations of aging and entropy. There is no escape.

I am lucky. I am still in relatively good shape in every sense. Though I can -- and sadly, do -- enumerate my many flaws and think about what I have lost, and what I could save or gain. I weigh all this against simply enjoying life and being grateful for the bounty I do have. I still have enough -- enough vision, hearing, voice, hair, and on good days, some wit and humor.

50. I sigh and shift in my seat, various parts aching. It has been a challenging year, more challenging than the previous one. I have wrestled with after-effects and the inevitable "well, now what?" as parts of my life have changed and continue to change. Nothing lasts forever.

I consider my life at present. This milestone is intersecting with a few others. Things are in motion, like it or not. But motion and change are the stuff of life, and lack of those things is death.

My wife tells me I should celebrate. It is better than the alternative, in every way. Better than mourning. Better than not turning 50.

If there is one benefit to getting older, it is a growing awareness of my own capabilities and how much things are worth to me. I know what is out of reach, and what could be in reach if I were willing to pay the price. I think I know what is important to me. That is significant.

Some years ago, my friend Stan captioned a photo of me with a quote that said something like "blessed is he who has won understanding of the nature of things". Back then, I definitely didn't deserve such attribution. I still aspire to be worthy of it.

There is still so much to do, and that includes some doing nothing. I am working on music and writing. New projects. Trying to spend time with friends. The last year was a stark and sobering reminder to enjoy the people around me before we move on.

I have planned carefully for the future, and now I am working to make sure I enjoy life a little more in case that future fails to arrive for whatever reason.

I expect a few changes in the next year. A new job, for one (I'm looking, so please keep an eye out for me). I look forward to the adventure. Thank you for being here with me.