Regular readers know I always post proudly about any press I get on things I work on. I love to crow about my modest achievements.

Well, not long ago, it came to my attention that TIME had written about another product I worked on: Meez.

If you have to do something wrong, do it really wrong!

(It's worth noting TIME hated the concept, not so much the execution. I did consulting on the initial site design - the final site as shown here included some of that work but was further developed by the Meez team).

You are in Los Angeles.

You select a ridiculous red Dodge Charger from the rental car place. You know that when you're in L.A., you need a stylin' ride. There are many ways to get from LAX into the city, and you still remember a few of them.

There is a record industry convention at the Century City Hyatt. You know this hotel well. Smack in the middle of Avenue of the Stars. Pretty and swank. Near Beverly Hills and Santa Monica. Has its own shopping center nearby. You've been there before.

Pulling into traffic, you turn on KROQ. They are playing "Come As You Are" by Nirvana. You laugh out loud. Weren't they playing this when you left L.A. 13 years ago? You turn it up, and you roll the windows down as you accelerate.

You remember buying this record when it came out in 1991 at the Wherehouse on Sunset. You watched the videos on MTV in your terrible apartment in the Ramparts district. It changed everything.

Come as you are
As you were
...as an old memory


You look out the window of the hotel and see what would be called "June Gloom", if it were actually June. You look at the freshly cut and watered lawns and medians and watch the cars glide by. 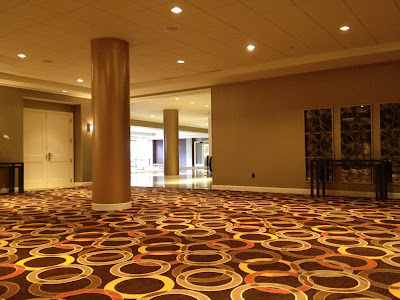 You have time for a light lunch and coffee alone in the nearly deserted restaurant, before heading off to your first set of meetings.


Your first night, you are lucky to meet with an old friend who used to be in a band. Has a kid now. Still buys guitars and plays at home. The restaurant is in Culver City. Yeah, you know where that is. Dinner is tasty and you have a nice Old Fashioned.

Soon your friend has to get back to his family. You start to head back to the hotel, but you're sort of on autopilot and before you know it, you pass by the old photo booth. Incredibly, it is still there. You turn on Cashio. Drive a few blocks. You used to live here. Right here. You creep up Shenandoah, marveling at the neighborhood and buildings.

This is what you wanted, kid
A universe behind your lids
...cheap thrills don't come clean


Turn and turn. Olympic. The park where you used to run at night, across from what used to be Ships. You sigh. You should have gone there more. There. You lived in that house with your brother and your friend. Before. It had a pool in the back yard. You floated there at 2 am in that big heat wave, after a Ralph's run to get ice cream. 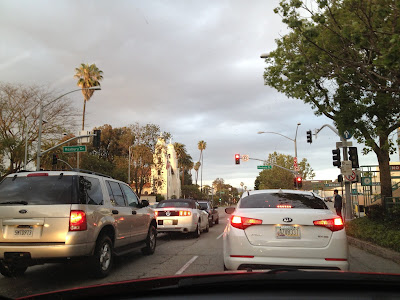 You drive on. The Joint. Still there, still hosting live music. Is that where you played your last L.A. show? One of them, anyhow.

15 minutes later, in a different part of town now. Used to be a record store there. You had a nice dinner at that other place. Several, in fact. You think of other places you could go visit. You could head back up to Beachwood... Yeah, that was where...well, let's not go there.

She hung the moon
She said goodbye today
I took a long, long drive
Thinking of the last time I saw her face

For dinner, you connect with an old friend. You agree to meet at Dan Tana's in Santa Monica. It's just down the street from Doug Weston's Troubadour. You look for parking in the out-of-the-way place you would have parked 15 years ago, and you actually find it. Walking up, you remember you've been here before, a long time ago. A date with L_____.

Dinner is good. You have drinks and catch up. Things are good. You're both older and healthier. Divorced and remarried (and, in his case, divorced again). Both still playing music. And one of your friends is playing a show tonight. In Hollywood. At Boardner's. Well, you know the way. Many ways to get there. So of course, you go. 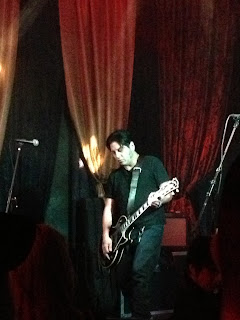 You walk into the club. A few people are smoking. The music is crazy loud. You see K_____ sitting on a couch. You step in front of him, smile and wave. He smiles big and yells over the din "WHAT ARE YOU DOING HERE???"

You yell back "I HEARD YOU HAD A SHOW! CAME DOWN TO SEE IT!" You hug. He's genuinely surprised and touched to see you. You yell/chat for a bit and watch the other band play. They're pretty good for what they do.

At the bar you order a soda water. It costs $3. Nothing has changed in RockWorld. You are happy to be there, to experience this again. To be at a club in Hollywood, hanging with friends, watching other friends play on stage. It's like the last 15 years never happened.


But they did happen. To you, and everyone else. Many of the people you know and would have been here with are gone. A couple are dead, most just left town. On the plus side, you're much more patient about the other bands, and able to listen both more and less critically and just enjoy things. On the minus, your feet are hurting from all the running. You feel your broken bones and bruises. Tired. Sometime before the end of the set, you slip out.

The streets of Hollywood are quiet. You're near Musicians Institute. You can see the signs.

The scent of magnolia fills the perfect evening air. You remember the simple pleasure of living in this beautiful weather, experiencing these evenings. The countless lonely walks back to your car, the driving before and after shows and parties, the walks around your neighborhoods, gazing up at the moon.

As you turn onto Highland, a song from one of your old bands comes up on your iPod. You think about all the people you knew, everything that happened.

When you cross La Cienega on Santa Monica, you turn your head south and see a stream of streetlights, headlights, and taillights shooting away to infinity. A million memories and dreams all converging and fading in the distance. Beautiful, momentary, and forever out of reach.

Tomorrow? Well, it might never come
I wish I could shoot out the sun
Forget about the #1