2018 seemed to have a recurring theme: Running out of time.

The highlight of 2018 was a party I threw for my 49th birthday. A hundred of my friends converged in one spot for a few hours. I played them a few songs. They ate, drank, and made merry. I got to see friends from every major era of my life meeting, talking, laughing. I wished it would never end, but of course, eventually, it is always time to go. I was exhausted when it was over, and realized I hadn't eaten any food and had only had one drink. I just ran out of time.

Perhaps most significantly, the scientific community raised the alarm about climate change in clear and certain terms. We are quite literally running out of time to stop destroying our one planet. We should all think about what we can do to change our own lifestyles and change others minds. If we cannot all move global culture in a new and sustainable direction, humanity will begin to suffer in a few decades and may not survive too many more.

This was brought home quite clearly during the massive California wildfires: we need a healthy environment so we can live. For nearly two weeks, the blackened skies rained ash. The San Francisco Bay Area air was dangerously unhealthy. Stores ran out of masks and air purifiers. Headaches and health problems ensued. It seemed like it would never end. By the time the fires were finally controlled and the air began to clear, we had all seemed to get used to it somehow, even as we complained.

People have some legitimate concerns about the economic effects of fighting climate change. But climate change itself makes us run out of money as well as time. The Camp fire alone is estimated to have caused $7-10 billion in losses, to say nothing of long-term health damage.

The ongoing metaphorical fire in American democracy and government showed little sign of containment, however. Trump is still in the White House, still compromised, and still smashing whatever he can. It is increasingly difficult to deny how harmful he and his policies are, or to ignore evidence that he is in some way motivated by foreign interests.

Trump's election also seems to be somewhat enabled by the continuing reliance on social media, which only became more toxic and useless in 2018. The best non-fiction books I read in 2018 addressed these topics head-on: "Likewar" by P.W. Singer and Emerson T. Brooking and "Ten Arguments for Deleting Your Social Media Accounts Right Now" by Jaron Lanier. Both are highly recommended, and quite thought-provoking.

I could come up with long list of dark and depressing news stories -- I suspect you have your own "Greatest Hits". 2018 was also a year in which I found myself turning away from the news more frequently, both because it was such a downer and because, whatever the format or provider, I found myself seeing too much of the machinations, business models, and agendas behind the scenes to not have cynicism seep into my interpretations of what was covered and how. The biggest "innovations" and influences in news for the last 20 years have been Fox News, the comments section of the internet, and social media. It is difficult for me to think of too many things more depressing.

For me, the year itself seemed to rush by. Most of my year was occupied with a serious illness, which dilated time in all directions. I am reluctant to focus too much on all this, as it is both tedious and terrifying, but when people ask "how was your year?" or "what did you get up to in 2018?", that part of it looms large.

I have been quite lucky so far, and I hope that luck holds out. Some of my dear friends have not been as fortunate, and they are in my thoughts daily.

My own experience brought me back in contact with an old friend I had not seen in 35 years, which is a wonderful gift. It also served as a reminder that who we are and how we treat other people matters in ways that can be hard to predict, and that our actions echo into the future.

I managed to write a decent amount, averaging a post every two weeks here, some of which I thought were good. I hope to keep writing more in 2019.

I also finished a number of music projects that had been stewing for a while.

The EP I worked on with DBA was completed and released. This modern rock album is one of the first collaborations I have done in a long time. It was refreshing to return to my roots as a synthesizer player and not have the burden of being the bandleader and primary creative force.

"EP01" is available on Bandcamp and iTunes as well as popular music streaming services like Spotify and Apple Music.

After 12 years of work, the new Sid Luscious and The Pants record "Pantemonium!" is mastered and ready for release, as soon as the CD artwork is completed.

"Pantemonium!" has been a long time coming. It features some great contributions from Pants past and present. Steve Mason adds cello, Rich Trott adds piano, and Mark Erickson adds lead guitar to "Finale", perhaps my favorite song on the record. Maryann Faricy gets to sing lead on "Someone Close".

The first track, "One Life", gained new resonance for me throughout 2018:
"It sucks getting old, or so I'm told...but baby, don't believe all you hear..."

I am glad to have it finished so I can move on to other things. I am also quite proud of it and hope you enjoy it. I am currently planning on releasing it on Valentine's Day, 2019.

This year also saw the completion of another collaboration, this one with Brian Ward. Our band Luscious-235 combines the 80s sensibilities of Sid Luscious with U-235's synthwave and electronica. Our debut album "End.Game." is available now.

This record is one of the best things I have done. I started working on it at the end of 2017 and finished it this year. We commissioned John Karborn to create the front cover. My friend John Hong played some amazing saxophone on "Better Off Dead".

Head on over to Bandcamp and pick it up. And for those of you with record players, we are also doing a limited edition vinyl run.

I face 2019 with cautious optimism. I am ready, even as I hear the clock counting down. 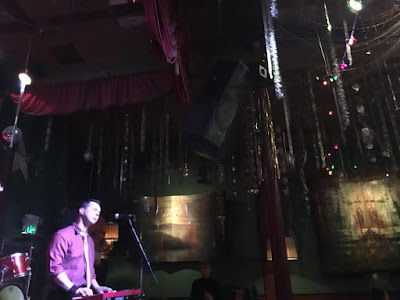