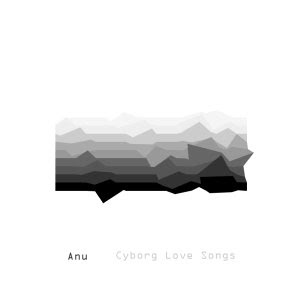 Cyborg Love Songs is finished and available for download.
You can also download a crude PDF proof of the book/liner notes.
at February 29, 2008 No comments:

It's been a long, busy, and challenging few days since I last posted. At that time, I had about 4 tracks near done ("Perfect", "Home is where the hum is", "Magnesium and other metals", and "Ctrl-Q").
In the two weeks since, I've had many rehearsals with one of my other bands culminating in a show at the DeYoung Museum, the usual crazy stuff at work, and a few very bad nights of sleeplessness and twitching in bed.

I also had an old friend visiting from out of town who stayed in my studio.

Regardless, I've managed to get 3 more tracks finished.

Updated: I've added Yahoo's new Goose player to provide in-line playback of tracks and updated all the links. They should all play now.

"Daemons" was the first of the 3. Drum and bass-inflected pop. My lovely wife provided some lyrical criticism which led me to substantially improve the song. And per Brian Eno, there appear to be no problems that more backing vocals can't fix. This will almost certainly be the first track on the record.
Daemons [mix 07]

"Cyborg Love Song" is the inevitable title track. This one was surprisingly easy. From just a tiny bit of lyric and a melodic fragment in my head, the rest sprang out. It's sort of unabashedly pop and (new) romantic, which is appropriate given that I wanted to make a synth-pop record. The project has gone in a little bit of a different direction, but there's something I find beautiful and disturbing about this song.

The worst part of working on it yesterday was that after having gotten close to final, some plug-in had a bad interaction with Cubase and it corrupted the session, preventing me from saving and forcing a crash followed by a reboot. Nice. I've traced it down - apparently the Sonalksis TBK Filter doesn't play nice with Cubase if you draw in automation while the track is playing back.
Cyborg Love Song [mix 04]

"Undo" was today's task. An homage/rip-off of everything on Burial's "Untrue" album. It's going to be the last track on the record. It's also got a few nods to some other songs I have written, including "Decayed, Decayed". I am not 100% happy with this one right now, even though it is probably done. We'll see how it sounds in a day or two, and how much time I have left.
Undo [mix 02]

I also demoed "Download" but this is likely going to undergo substantial changes. The good news is that it only has to be about 2 minutes long - I'm down to the last minute but I plan on mixing the heads and tails of the songs together and this will likely "eat" a minute or so.

One interesting thing is that most of these songs stretch out a bit - they have long intros and outros, something I haven't done in 10 years. Some of that is giving the songs some room to breathe instead of "don't bore us, get to the chorus". Some of it is padding to hit the 35-minute mark.

The only other thing I have to do this week is finish up the book, which I'm waaay behind on. Then again, I guess only the album/audio has to be finished and shipped by 3/1, so no sense in killing myself over it if I don't have to.
at February 24, 2008 No comments:

Sid at the DeYoung

My good friend Sid Luscious played the DeYoung museum on Friday night. I'm sure he'll post about it on his blog but I wanted to share some thoughts as well.

As someone who loves modern art, it was great to get to the DeYoung for any reason. And walking in there as everything was getting set up was a treat - hearing the synth solo for "Valerie N" floating through the halls on a cloud of reverb while admiring a huge Gilbert and George mural with a poop crucifix and a caption of "Shitty" was just...perfect.

It's been a long, hard road for Sid. I'm glad he finally got to show his work at a proper museum. By all accounts, the show was a success. I feel privileged to have been there. The Pants never sounded better, many friends turned out, and a great time was had by all.
at February 23, 2008 No comments:

A busy last few days. During the week I started on "Magnesium and other metals" (a.k.a. "Periodic Table").

I tried using a few new instruments that I hadn't used much before. The good news is I got them to work. The bad news is that getting the sounds exactly right was tricky - some parameters weren't quite right, and it took some doing to dial them in.

The end result was a close to final version of "Magnesium". The mix was all over the place, but this morning I sat down and got it all worked out. I think it still needs some backing vocals on the chorus.
Magnesium and other metals [mix 07]

I wanted to keep moving and on schedule so I started thinking about the next song - "Q" (or "CTRL-Q"), a song about video game addiction. I also wanted to do something that was sort of swing-y and in 6/8.

I built the track up pretty quickly and went off to the gym, wondering what I would do for vocals to keep it from sounding too much like "Personal Jesus". Fortunately, I head some tracks off the IAMX album "The Alternative" and it gave me all the inspiration I needed.

I got back from the gym and threw down the vocal, which turned out much better than I thought for a first take/trial. Forgot to eat dinner but got the track done.

Then I had some dinner and listened back to the mix. Vocals are too loud and probably have too many words.
Ctrl-Q [mix 05]

Ok, here's a new rule: If you're going to de-lurk and comment on something, and you're a friend of mine and you haven't gotten my e-mail address...you need to get in touch with me!

K, I'm thinking about you at this moment, but you're not the only one who's done this...I've got a whole alphabet soup I could reference.

I figure some of this is because while I'm easy to find on the internet, my e-mail address isn't. So here's the deal: my e-mail address is my first name (the 3 letter one) plus my last name as one word (a****** - huh, that looks like something else entirely...) at the GMail dot com.

And K, funny that you commented the other day. I was just thinking about you as I was marveling that the following is now available in Rhapsody:


The 2008 RPM Challenge has begun! I've been busy since Friday night and have already produced 2 tracks.

The first track is tentatively called "Perfect". It's built around a whole-tone scale (made obvious by running up the scale early in the song). I'll say this - it's hard to write melodies in whole-tone when you're not used to it. It really sounds weird. But that's OK by me - I'm looking for something a little outside what I'd normally do here. I need to finish the words and I'm not thrilled with the vocal performance yet, but the rest of the track seems promising. I spent Friday night and most of Saturday working on this one.
Perfect (rough mix 05)

Saturday night I started in on a new piece. I was thinking about how easy it's been for me to fall asleep on airplanes (and how difficult to sleep anywhere else lately). I wanted something that would convey the dream state and flying. I built this song out of noise and drones, and did a very low vocal reminiscent of a track I recorded 10 years ago called "LEM". An appropriate homage. Working title for this song is "Home is where the hum is". More or less finished after a second mix pass - lots of low-end energy made for an overly muddy mix the first time around.
Home is where the hum is (rough mix 04a)

Between these 2 songs I already have nearly 8 minutes done. Seems almost too easy so far!
Today I was researching some of the physical problems I've been having - apparently magnesium deficiencies can produce some of the symptoms I've been having. After doing some poking around on the Internet, I realized that the quest for completely balancing one's body chemistry is good grist for a song. Maybe I'll call it "Magnesium and other metals" or something to do with the periodic table.

Updated: Apparently the Chill server cares about capitalization of filenames. Sorry the links weren't working. Fixed now, and as a consolation prize I put up a newer, more complete mix of "Perfect".

Would love to hear what people think of the tracks.