Number 6 Has Finally Escaped The Village 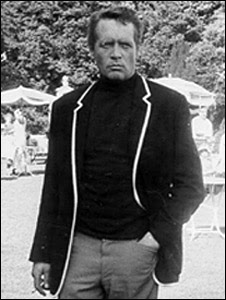 Few things have affected me as profoundly as "The Prisoner", his visionary, bizarre television series. WIRED has a good article, and this interview is also worth a read whether you're familiar or not.

I remember seeing the Prisoner on public television before I was a teenager. I don't remember much about those viewings beyond vague impressions - I asked my parents many questions (I did that a lot). I remember the ending of every show - his face silently flying up on the screen as bars slam shut with a giant, echoing noise.

But like many things from childhood, those vague impressions left a mark, and by the time VCRs and cable TV (late to Northern Virginia) were commonplace, I spent every weekend scanning the TV listings to see if it was airing again. Eventually in the summer of 1990, PBS ran some of them and when I could remember to set the VCR and it cooperated, I got a few grainy episodes.

College is probably the best time to see The Prisoner, as its references and ambiguity resonate more. Plus you can walk around the campus (its own little village) saluting people and grimly saying "be seeing you". Which I did. If I had found a dark blue jacket with piping, I would have worn it with white Keds. I even joined "Six of One" for a while.

The more I learned about the show, the more impressed I was. He came up with the idea, pitched it, wrote episodes, directed. There were even meta-layers of story - McGoohan had broken big playing a secret agent (John Drake, in "Danger Man", a.k.a. "Secret Agent" - the show with the famous "Secret Agent Man" theme song). After more than 50 shows he wanted to stop - to resign - and they didn't want him to. He started wondering about what happens to secret agents when they resign...

Finally all the episodes were released on DVD, and I bought the set. Not every episode is perfect (McGoohan wanted to do 10, they made him do 17 to get a deal), but even the lamer ones feature his steely determination and undermining of the genre while simultaneously hewing to its conventions.

He never uses a gun. There's always a stagey-looking fistfight. But often as not, he gets the crap beat out of him by the goons in the stripey new wave/French t-shirts. He's smarter than everyone else. They can't break him. But he never escapes. Even when he escapes, he can't escape. The fix is in, and everyone in the world seems to be in on it.

The show makes me laugh and makes me very sad and cynical. What more can you ask for of art? It also serves as an interesting period piece. I can't imagine anything this creative and subversive ever getting on television again.

The "election" episode alone is worth the price of admission. Its title, "Free For All", is the type of dual meaning McGoohan (who wrote it and several other episodes) laced throughout the series.

McGoohan saw the world as it was and as it could be in positive and negative futures. A cranky guy, cranky for the right reasons. Also did fantastic acting in "Hell Drivers" and "Ice Station Zebra".


"We're run by the Pentagon, we're run by Madison Avenue, we're run by television, and as long as we accept those things and don't revolt we'll have to go along with the stream to the eventual avalanche...As long as we go out and buy stuff, we're at their mercy.
...
"We all live in a little Village...your Village may be different from other people's Villages, but we are all prisoners."