Who's To Blame For The BP Disaster? 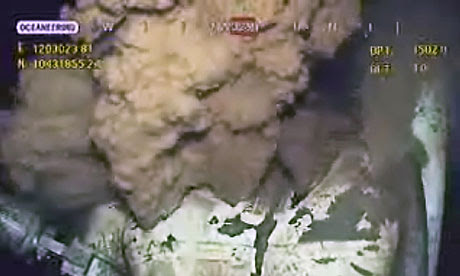 I've posted about oil before, and I've posted a few times about other energy sources. I feel compelled to write about the BP disaster.

It's been over a month since the Deepwater Horizon sank, and oil has been pouring into the Gulf of Mexico non-stop ever since. BP's latest effort ("Top Kill") has failed. It is gradually dawning on people that BP may not be able to stop the leak any time soon.

This will be the largest environmental catastrophe in American history. As much as I hate to prognosticate, I expect in a few weeks the phrase "America's Chernobyl" will make its way into the public dialog. And it should. But in the long term, this is worse than Chernobyl.

While Chernobyl was awful, affecting hundreds of thousands of people, it was dealt with quickly. Chernobyl resulted in a relatively small number of direct human deaths, and a minimal effect on the surrounding ecosystem. Now, 24 years later, nearly all of the area is habitable. Wildlife appears to be making a strong comeback, even with the radiation and inevitable genetic damage.

If BP were to stop the oil right now, the world is still facing the real possibility of the extinction of much of the sea life in the area, and the potential collapse of the ecosystem in the Gulf in both short and long term. Each day that passes increases those odds.

There is a very real possibility the well simply cannot be stopped with the technology we have today. With Chernobyl, relatively simple techniques (dropping tons of concrete) worked, and worked quickly.

There are about 3800 offshore drilling platforms in the Gulf of Mexico alone. The real surprise for the BP spill isn't that it happened - the real surprises are that it took this long to happen, and that the industry remains able to drill in places where there was not a robust plan for dealing with a "black swan" event or total failure scenario.

If you had been told "hey, there's a chance that offshore drilling will absolutely obliterate the Gulf of Mexico", would it still have been OK?

But that's not the real issue here. Right now, everyone is focused on one question: Who's to blame? So far, I've heard:
But this is all distraction and misdirection. Here's who's really at fault:

We ignored the wake-up call of the '70s oil shocks and spent the last 40 years pretending everything was OK
We continued to drive gas-guzzling cars after the oil shocks of the '70s, culminating in the plague of SUVs and The Hummer
We care more about how fast our car gets to 60 than how far it goes on a gallon of gas
We care more about cupholders and DVD players in our cars than emissions
We wanted a ridiculously big, heavy car because it made us feel safer, despite it actually being less safe for everyone else, and occasionally, us.
We knew we'd run out of oil, paper, and fresh water in our lifetimes and we decided somebody else would figure it out
We complain about windmills blocking our view
We fight nuclear power
We are OK with lopping the tops off of mountains and wrecking our landscape for coal, as long as it doesn't happen in our town
We complain every time the price of gas goes up a nickel, despite the fact that we only spend $2400 per year on gas, and the real cost of gas has fallen steadily over the last few years
We couldn't be bothered to bring bags to the grocery store and embraced the plastic grocery bag with open arms
We bought bottled water, buying industry panic and hype while both paying for tap water and infrastructure and not caring about groundwater quality
We leave the lights on
We expect everything to be wrapped and packed in plastic

Most damningly, we feel entitled to a particular way of life: A rich one, where we get to say what changes and what doesn't, when and how. That's delusional. Our way of life is always changing, like it or not.

We should all take a good look in the mirror. Make some changes right now. Find out what you can do. And prepare for a less pleasant way of life in the future.
at May 29, 2010

I said the same thing to Trinette last night. These large oil companies are only guilty of delivering what we as consumers demand - more oil as cheaply as possible. This disaster is on our shoulders, not theirs.