The Collapse of BlackBerry and When To Be Nervous 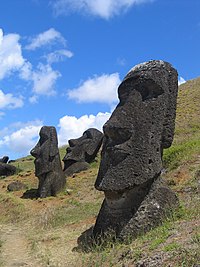 Yesterday, Research In Motion, a.k.a. RIM, the company that pioneered smartphones with the BlackBerry, announced they are laying off 11% of their workforce.

Several years ago, I read Jared Diamond's totally depressing book "Collapse: How Societies Choose To Fail Or Succeed". The title says it all. Diamond offers a rather bleak analysis and looks at a number of societies which collapsed and a few which managed to survive.

One example is Easter Island.

Easter Island used to be covered with trees and forest so dense it was nearly impassable. Humans arrived and set up a society. In a few decades, they leveled the forests, and their society quickly died a gruesome, futile, bloody death. The environment still hasn't recovered from the humans. The only things that remain are the creepy statues.


One of the most powerful passages in the book is when Diamond asks "What was going through the mind of the person chopping down the last tree on Easter Island?"

Why did the people continue to destroy the very environment they needed to survive? And how and why did they keep going when it was beyond obvious?

Diamond also covers the first Viking settlers in Greenland. They starved to death, resorting to eating their horses (down to the hooves), the meager vegetation in the area, and eventually each other. All this while the native people were literally next to them pulling fish out of the water with their bare hands. See, the Vikings didn't eat seafood. Not part of their culture.

The Easter Islanders and the Vikings had one thing in common. Neither society would change their way of life - their "values", even though it they were not sustainable and obviously not appropriate for the world they inhabited. Quite literally, they chose death over changing how they lived.

I've been working on a BlackBerry application for several months. Previously, I've worked on iOS and Android, and taken a very close look at Windows Phone 7.

I hate working on the BlackBerry platform.

The tools are difficult to configure and painful to use, so much so that even finding them on BlackBerry's site took one whole day, figuring out what I needed to install them took 2 days, and in the end, I've had to resort to using a freeware 3rd-party software.

I've been reading a number of articles about RIM lately, notably http://www.bgr.com/2011/07/13/rims-inside-story-an-exclusive-look-at-the-rise-and-fall-of-the-company-that-made-smartphones-smart/ and http://mobileopportunity.blogspot.com/2010/10/whats-really-wrong-with-blackberry-and.html

They're fascinating reads, and have inspired me to write notes and memos to myself and my fellow employees.

BlackBerry is very much like the Easter Islanders and the Vikings: it chose not to acknowledge the reality it inhabited, doesn't want to change, and it is slowly collapsing as a result. If they survive, it will be as a niche player in an industry they inspired, if not created.

Things to consider:
Don't be worried when things are rough at your company - you usually know what needs to be done. The problems are often obvious: we need a feature or this piece of technology is broken/out-of-date or our marketing sucks.

The challenge is typically in the execution (more on that in the future).

Be nervous when you're on top. That's when hubris tends to rear its ugly head, and that is when you start making fatal mistakes.

Being on top is seldom something that lasts, but being there seems to blind people to that fact. Look at IBM or Xerox or Microsoft or GM or anyone. Who's next? Google? Apple? Facebook? (I'd say "all of the above").

When you're on top, especially if you're the person who brought your company there, it's hard to be objective. It's difficult politically and culturally to say "we don't know what to do next" or "we can't find any more users".

Things happen. The world becomes different. Your original assumptions are no longer valid. Changing them is akin to "abandoning your identity" or "principles".

By values I don't mean things like "honesty" or "making a difference". I mean things like "our products will never have a camera or MP3 player" or "8086 architecture only" or "rotary engines" or "we only do black and white".

When you find yourself wondering why the market can't see how incredible your product is, you have 2 choices:
Choice 1 is inherently arrogant and fighting against the entire world. Very few companies and products manage to turn this type of perception around. It also costs a lot of money and all your competitors get to ride free on your expenditures. Frequently senior executives prefer to go this route because it is psychologically safer and easier than saying "we are doing it wrong".

After everything falls apart, they can blame bad execution or incompetent minions or lack of cash. These are all ways to deflect thinking about whether or not it was a sound plan in the first place.

Choice 2 is difficult. It requires some amount of risk (which can be mitigated). But I believe it is the best thing to do. Truly successful companies are asking themselves if they're doing it wrong all the time, and frequently have small research projects looking at alternatives to their core products all the time.

Adapt or die. Face reality. It's really that simple.