Without much preamble, here are albums I found particularly notable in 2011.

Album of the Year

Without a doubt the best record of the year. A strong (but not strident) anti-war record. Beautiful songs and great production. Perhaps the only artist who articulated anything truly compelling and powerful this year.

Lots of people don't like this record because it doesn't sound like "Dry" or Harvey's other earlier work. Me, I respect her more for being willing to stretch, reach, and change, and for trying not to repeat herself.

It's also a record that holds up to repeated listening. It is not necessarily a record I want to put on every day, but I expect I'll be listening to it for many years. It avoids sounding contemporary in favor of sounding timeless.

This is what pop for grown-ups should probably sound like. Many of the hipsters and "cool" listeners I know may point and laugh, but I thought this record was great.

Friday has a rich, lovely voice and writes songs that are unabashedly "pop" with big choruses, clear sections, and strong beats, but they're also adult, complex and ambiguous in their meaning and emotion.

You can hear the first single "Able" on Gavin Friday's website. 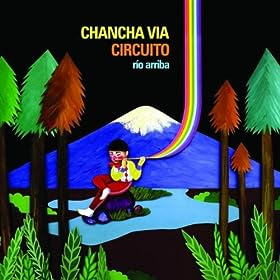 Sort of DJ Shadow for Argentinian music. Loops and electronics working with samples and/or acoustic instruments. One of the more unique things I've heard over the last few years.

Not necessarily life-changing, but far cooler, more interesting, and more fun than many of the records you'll hear about on everyone else's lists.

You can hear the whole album on SoundCloud.

When I first heard this record, I assumed it was a debut record from a few talented kids. It has a combination of hooks and weirdness that is usually lost in older artists as they learn how songs are "supposed" to go and records are "supposed" to sound.

This record is just polished enough to be palatable, and is plenty catchy to boot. I probably won't be listening to this in a year or two, but I really enjoyed it this year.

You can hear the whole album on SoundCloud.

John Foxx was the original singer for Ultravox (He wrote "Hiroshima Mon Amour"), and his legendary solo album "Metamatic"inspired Gary Numan's early work. This year Foxx partnered up with Benge and his famous studio full of vintage synths.

"Interplay" was the result, an album simultaneously futuristic and retro. The songs are strong, tight, and catchy, and the production is vintage electronica, all flanged chirping Roland drum boxes and buzzing, thrumming, swooping, and grinding synthesizers.

Ultimately the record shows that it is possible to make something fresh, solid, and real with what most people would consider a dated palette.

You can hear single "Evergreen" on SoundCloud.

There were several albums by new or young groups this year that tried to either capitalize on "the 80s" or falsetto-based synth-funk from the 80s. Artists like John Maus and The Weeknd made watery, cargo cult records which failed to make any positive impression with me.

Ford and Lopatin's "Channel Pressure", on the other hand, takes those elements and signifiers (parts were recorded at Jan Hammer's studio!) and does something great with them. Memorable songs and modern, glitchy production are interleaved with instrumental bits to create a Floydian whole.

It took a few listens for me to understand it, but I appreciated the challenge and depth.

You can hear single "Emergency Room" on their label's website.

It sounds just like old Cars albums. Many bands struggle to achieve a return to form and fail. Many more achieve it only to find it's an empty exercise.

Given that, hearing The Cars (minus the late Ben Orr) do this so well was quite satisfying. Songs like the wistful "Soon" are easily as good as anything they've ever done.

Remember the Golden Age of Trip-Hop, back in the late 90s? Thievery Corporation do. Their new album, "Culture of Fear", is a clear throwback to those days of yore. For better or for worse, this album would mix seamlessly with Morcheeba's "Who Can You Trust?", Massive Attack's "Protection", and Air's "Moon Safari".

This record is an easy listen and is nothing new for Thievery Corporation, who were a part of the Golden Age of Trip-Hop and have been more or less doing the same thing for a dozen-plus years. It's still enjoyable, as long as you skip the title track, soured by Mr. Lif's tedious rapping.

My appetite for metal continues to wane, aside from the occasional unimpeachable classic. This album fulfilled my quota this year.

Mastodon is a great band, not just a great metal band. Their music is arty and powerful. This year, Mastodon made a U-turn from increasingly elaborate concept albums to make their version of a "concise pop" album.

Despite the p-word, this record still growls, punches, and kicks like a bar fight. It sounds great and doesn't wear out its welcome. I will be listening to it again and again!

You can read lyrics and hear this album at the band's website.
at December 31, 2011

Listened to the Gavin Friday track — am I the only one who kept wanting to sing Bowie's "Heroes" over the top of it? Thanks for the list, Anu. I think I know what today's MOG playlist will be looking like.