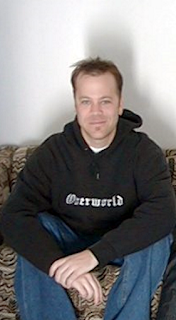 I could not bring myself to write about it at the time. Dave was the fourth of my friends to die in the space of two years. Writing these obituaries is difficult. I also had concerns that the sheer frequency made them all feel less significant.

The circumstances of Dave's death and our relationship also complicated things.

I met Dave back in the mid-90s, when I was working at an audio technology company. Dave was hired as an intern, and his intern project was porting the DSP code for one of the company's technologies to a recording studio rack unit. Dave had studied this stuff in school.

At the time, this kind of "load a plug-in" feature was new and exciting. Dave got it running easily. Since it was part of the pro audio business, it was part of my world.

I got to know Dave as part of my frequent trips to the Bay Area. He was roommates with some of my colleagues in that audio technology company. I slept on their fold-out couches on the nights I didn't make it back home to L.A.

Dave had a charming and easy smile, a slow, measured way of speaking, and a soft laugh. He loved music, and turned me on not just to grungy indie rock but also some great underground electronic stuff. His taste was broad, his passion for art deep, and his analysis of what made something good or bad was insightful.

Dave was one of the co-founders of TuneTo.com, the start-up which brought me up to the Bay Area, and which eventually produced Rhapsody/Napster. I was incredibly grateful to Dave and the rest of the team for that opportunity.

When I moved to San Francisco in 2000, I only knew a handful of people. Dave was one of them, and I ended up finding an apartment just a couple blocks away from Dave. We occasionally carpooled to work.

Dave was an inventive guitar player. We played music together a few times, and talked about starting some kind of band. At that time, I was still recovering from my pro years in L.A. and was reluctant to do anything with that kind of structure or commitment, but it was fun to think about, and Dave had written some good songs.

Aside from working together, we hung out evenings and weekends. We went to see bands play. We had some memorable nights at legendary San Francisco bar LiPo, with a lovely lady and another friend from L.A. in tow.

But that was also where it became clear to me that Dave had some problems. Those problems became harder for me and Dave's other friends to ignore as his nightlife bled into the rest of his life.

I eventually confronted Dave about those issues. He did not want to hear it at the time, and it damaged our friendship, and we stopped hanging out. I couldn't watch him destroy himself, and he didn't want anyone wagging their finger at him.

It wasn't until many years later that he told me he was grateful for what I said. I only wish I had been more vocal, sooner, and that I had been more helpful. The regret made me vow to speak truth to my friends, even when (or especially when) they "don't want to hear it".

We fell out of touch, but Dave looked to have been doing well the last few years, with new jobs and some new stability in his life. Unfortunately, it appears his newfound balance was somewhat precarious and fragile.

Thinking of Dave makes me think of music. Whenever I hear anything from Death Cab For Cutie's "We Have The Facts And We're Voting Yes", I see and hear Dave, who introduced me to the record and band. I wrote a song about our experiences on my album "Decayed, Decayed". I am currently working on a piece with one of our Li Po compatriots.

I hope Dave hears it, wherever he is.

Misguided by the 405, 'cause it lead me to an alcoholic summer

I missed the exit to your parents' house hours ago

Red wine and the cigarettes

Hide your bad habits underneath the patio