Sunday I went to a special event at the Computer History Museum in Mountain View. They hosted an event called "A celebration of Max Mathews and 50 years of Computer Music".

He is a giant in the field of electronic and computer music (the software package "Max/MSP" is named for him). He's 80 years old. And I got to meet him. And see him play violin with another old friend - Jon Appleton.

Jon was my musical mentor at Dartmouth College. I took any class he taught, and completed an independent study with him as well as taking courses from his electro-acoustic music graduate program. He had tremendous impact on my music and life - something I have yet to properly thank him for.

I had not seen him since 1991 - it's been 16 years! Jon left Dartmouth not too long ago and took a position out in Stanford, so I figured it was just a matter of time before I got to see him. This event at the Computer History Museum was perfect - he'd be speaking, performing, and there'd be a reception. I am pleased to report that he remembered who I was and that we were able to chat briefly.

Jon also introduced me to a few of the many electronic music pioneers there, including a (re-)introduction to Jean-Claude Risset, who had been a guest lecturer at several of my classes at Dartmouth and John Chowning, the acknowledged discoveror of FM synthesis (below are Risset and Chowning). 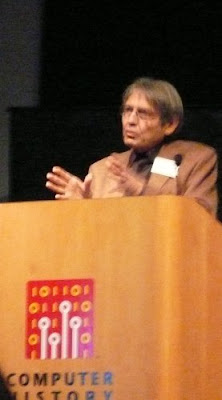 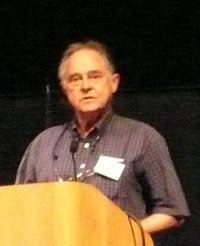 Also in attendance were Tom Oberheim and Roger Linn, both friends of Jon's. Roger was sitting in front of me during the concert and spent the whole show shooting photos with his arms crossed in front of him. His head is in several of the shots I took. I wanted to ask him about his upcoming "Boomchik" drum machine project with Dave Smith, but the opportunity never arose.

Turning around in my seat to see if I knew anyone else, I found myself staring right at ambient music legend Robert Rich. We started talking and it turns out we had a common friend in Phillip Blackford. Such a small world!

The speeches were more or less interesting. Jon's was by far the best, as it was both brief and entertaining. Max Mathews also gave a brief talk. He's the sharpest 80-year-old I've seen in a long time. Gives one hope about growing old.

The pieces were also great. Jon and Max actually played a duet (shown in the top photo - that's Jon on the left, Max on the right, and Roger Linn's giant head in the middle) - Max played violin while Jon conducted using the radio baton. There were a few tape pieces. An interesting duet between a DVD "worm" and an attractive young woman on radio baton. And a piece for clarinet, bass clarinet, and recordings of processed clarinet. Very interesting. Just being in that environment hearing that stuff took me back to college.

I wish I could have stayed a bit longer to meet more folks at the reception, but it was getting late, a long drive back up to the city, and my left leg (which has been very sore lately) was acting up, so I called it a night.

A great time out. I hope to see Jon again soon for dinner or something, and was pleased I got to meet so many people I consider famous!
at April 30, 2007