I've been in Las Vegas for about 24 hours. It's 4:00 pm. Outside it is 105 Fahrenheit. I put my hand to the giant window in my room. I can feel the desert seething, as if it resents Las Vegas itself - a phoenix of sin continually consuming itself in fiery explosions only to be reborn even more grand. 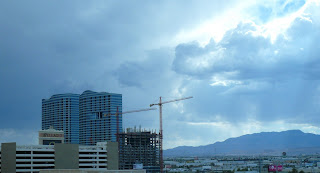 I've just returned from a late brunch with my father. I saw him yesterday. We had dinner about this time, before I went off to another dinner (I just enjoyed the fancy wine) followed by a trip over to the House of Blues for a Rhapsody+MTV party where Maroon 5 and Robin Thicke played. I marveled at how much I didn't care for the groups while silently wishing all the smokers would fall down dead. Living in California, one forgets that smoking is actually tolerated elsewhere. I got home about 2:30 am, bourbon coursing through my veins.

I'm tired. I've been traveling a lot. The next day or two is going to be a long slog through meetings, parties, and dinners. I'm not even entirely sure why I'm here. Something about relationship building and perks.

I look out the window. There's a massive storm front moving in. 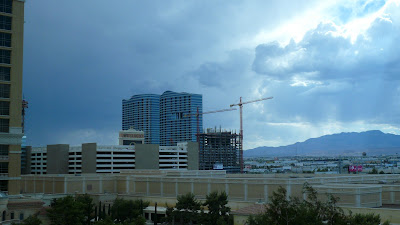 I don't have tickets for any of the actual VMA awards. After the show itself, there's a "post" party at the hotel pool. Then Rhapsody + MTV are having their own "after after" party at Beauty Bar Las Vegas. I should probably go to that, but it doesn't even start until midnight.

What I'd really like to do is sit in my luxurious, quiet hotel room, in the big comfy chair, and watch that storm front roll across the sky. Maybe order up some dinner. Read the New York Times. And go to sleep.

My phone buzzes. It's Jessica. "I have a ticket for you, but you have to get over here right now. Throw some clothes on and get moving."

How can I refuse? I throw on a nice new shirt and silk blazer and I'm out the door. Minutes later I'm in a cab.

And then things start to go bad. MTV and the cops have the streets blocked off a half-mile in every direction. My driver drops me off and then pulls the "I don't have change" routine so I'm forced to over-tip him. The hotel is surrounded by a crowd. Somehow I find a way in. The entire place is like a Japanese subway car at rush hour.

I call my contact on the phone. Nobody can hear me on the other end. I am frantically text-messaging while trying to fight my way to the other side of the hotel.

30 minutes later my contact locates me and hands me the badges I need. I am reborn. Now I have "All Access". I'm behind the velvet rope, moving through the crowds, passing with the celebrities. Mere minutes later, I'm up in the skybox over the clubs, examining Linkin Park's gear and waiting for the show to start. Only 2 hours to go.

Tyler and I are cracking wise about the absurdity of this event. I round up some more of our co-workers and they go off to look for drinks.

My phone rings. One of the editors (who deserves to be where I am much more than I do) is arranging a fancy dinner for those without access. He gives me the details. He doesn't know I have a ticket.

Another hour passes. Tyler says "This is bullshit. I don't even want to see this shitty band, why I am I standing here?" And he's gone.

Why am I standing here?

It's loud, but no one's talking to me. I have earplugs in and am rubbing my aching leg. At this point I suppose I should stay to see how a "real band" like Linkin Park delivers the goods. Maybe my friend Sid Luscious can learn something. But I'm looking at my phone. If I leave soon, I can catch dinner.

They're showing the MTV Video Music Awards on the TV screens in the club, but they're not patching the sound through, instead letting the crappy techno echo through the space. There's something very Brett Easton Ellis about the whole thing. Britney silently and vacantly gyrates on a dozen screens.

I stand up as Linkin Park starts to file in. The crowd is going nuts. Timbaland is below me, miming on a keyboard. Nobody notices it's not plugged in. Linkin Park starts playing. The sound is horrible, the band...adequate. I get through one verse and one chorus before I'm out out out.

Moving through the crowd. Excuse me. Coming through.

I manage to meet up with the gang for dinner. Look, there's Suge Knight. Was that Paris Hilton? We sit down at the steak house. The smallest meat they offer is 16 ounces and costs $50. The largest is 5 times that. Who actually eats that? We dine and laugh. It's hard to do good meat bad, but it's also hard to do it great. This isn't bad. It isn't great.

And now it's time for the first after party. I've had a bourbon. I don't care, it's going to be a long night and I'm in for the long haul at this point. We're outside. The dry air shrink-wraps my contacts to my eyes, which are themselves turning into the ocular equivalent of raisins. It must be 85 degrees out here.

We walk around the pool looking for something. Look, there's Sarah Silverman. The blonde guy from "House". The Foo Fighters. A couple dry-humping on a chair on a peninsula extending into the pool. Classy. Bad music continues its shuffley beat.

We see a lot of boob. Most of it fake. A lot of guys with pumped arms, oiled hair, headbands. It's like this site in real life. The uniform for guys is tattered $200 jeans, an embroidered shirt open 2 buttons, and some sort of hip loafers. Can we go yet? Nope, another hour.

Finally it's 11:30. We need to find a cab, get off the strip, get to our after-after-party at the Beauty Bar. The cab line is way on the other side of the hotel, the front being reserved for Kanye West and the crews loading out gear.

The cab line is about a half-mile long. I look at my friends. "We need a limo." They say "no, we can't, we can't!" They head for the cab line. We run into my boss and some other co-workers.

I love my boss. He is a master strategist. He also knows how to enjoy life. "Boss," I say, "we need a limo." He looks around, counts our party, evaluates the situation.

10 minutes later we're in a white stretch limo cruising to our party.

We arrive and there's already a line around the block to get in. These people look like SF hipsters - all the guys look like they're wearing girlpants. We hop out of our white stretch limo with our laminated "All Access" badges and walk to the front of the line and into the Beauty Bar Las Vegas.

This club is small. The main room is not much bigger than my living room. It's packed. And the music is so unbelievably loud. My teeth are rattling. I lean my head against the wall and nearly get a concussion from the bass vibrations. I believe the air is actually shimmering from the sound.

Outside it's actually a tiny bit cooler, but you have to deal with smokers. At least it's relatively quiet. We wait for the band, er, DJ to...play and kill time talking shop.

The DJs start up. Is that Ashlee Simpson? Isn't that a VJ? The fancy DJ CD players conk out. This act we hired is apparently the Eddie Van Halen of pushing "play" on a Discman or something. I don't get it. What I do hear I recognize as "Musique Non-Stop" by Kraftwerk, but these guys have added some junk on top of it. Or they did before their CD players broke.

They stop the show and tell us they'll resume soon once they get replacements. It's 1 am...where the hell are they getting replacements? But somehow, they arrive and it's back to "play".

An hour later, I am done. It's going to take a while to get back to the hotel. My boss and I and the ex-rock star start walking, looking to flag down a cab. I'm exhausted. My leg hurts. I'm not even drunk, just so tired I am not sure I'll even be able to sleep.

I wonder what happened to the storm front this afternoon. I don't remember it raining. I think Vegas just defeated it, forcing nature to evaporate and dissipate in the face of all that cash.
at September 09, 2007