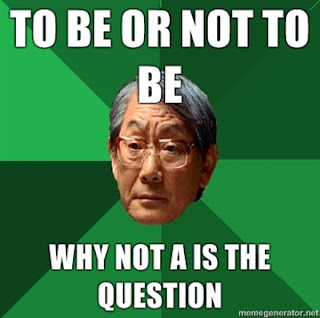 It's been over a month since the 30-year TIP reunion. I've had some time to reflect on my experiences and synthesize a bit of what I learned. I've managed to keep a few of the friendships I renewed at the reunion going and keep in touch with some of the people I saw there.

The reunion had a bit of a dark side, as most reunions do. In some sense, reunions are like going back to your childhood home - you are put into the mindset of being a kid again, or in this case, an adolescent. And that's not always pleasant, as there are parts of childhood best left behind. And of course, you're reminded of exactly how far from childhood you are...

One of the things I remember about being a gifted kid was a near-constant sense of inadequacy. No matter how smart or talented or bright or witty I was, there was always someone who exceeded my abilities, while making it look easy.

In a band? Some kids were in a better band. Putting out albums. Got a great score on the PSAT and SAT? Guess what? Only 2nd best, stud - that congressman's daughter scored 50 points higher and got the best score in the school. And so on.

TIP was the same way. I scored decently on the SATs as a 7th grader. But I met more than one kid there who got perfect scores on the SAT as a 7th grader. I was distracted, I goofed off, I didn't always do my best work. Other kids managed to focus and did. Even when I did do my best work, there were kids who just seemed to leave me in the dust. I taught myself geometry in about 2 weeks, passed the standardized test and got credit for it. But I did it while sitting next to kids who, in the same 2 week period, taught themselves algebra, geometry, trigonometry, and calculus.

Part of me wanted to try harder, to excel, to be not just "the best I could be", but "the best", or at least "better than that kid over there". Part of me knew it wasn't going to happen, because of ability or will or both.

Over the years I learned to deal with that longing and frustration. Perhaps I simply got better at justifying why I wasn't the best at everything, or even best at anything.

And yet, there I was, at the reunion, and suddenly it all comes rushing back.

I'm in the hospitality suite. I'm talking to a former classmate. She's got a Ph. D., and a lovely daughter who is not even 8 years old and is already asking her mom questions like "does an electron have mass?" Her life is dialed in.

Another of my former classmates is an economist contributing to a famous economics blog. Another is teaching economics at the Ivy League school where I majored in economics. Nearly everyone at the reunion had an advanced degree. They just seemed so damn smart and accomplished. Maybe I need to go back to school, do something meaningful. I ruminated and compared my own meager achievements to these people and found myself lacking.

But I start talking to them, and it begins to dawn on me: we all feel that way.

A guy who has started 2 successful businesses on his own feels like he needs to get a Ph. D in physics just so he can have one. And some of the people with one Ph. D feel they need to get a second one, because they don't feel like they've done enough. The people in academia wish they were out doing stuff in "the real world" and the people in the working world all think they should be teaching or researching.

When you're identified as having great potential, people tell you outrageous things. They say "you'll rule the world" or "you'll change everything" or "you'll be rich". You don't have to hear that too many times to start buying it when you're a kid. You want to believe it. You want to be the hero of the story, just like in all the books you've read.

But those expectations are unrealistic, if not misleading, for many reasons.

The presentation by the TIP researchers unintentionally referenced and reinforced those unrealistic expectations and dredged up all this stuff for everyone. After talking about gifted kids and how we grew up and what we were like, the researchers showed us photos of some other notable "gifted" people: Sergey Brin. Lady Gaga. A lady who'd won a big-deal physics prize.

I could feel all of the formerly precocious around me wincing in their seats as they thought "how come I'm not up there? Where did I miss my chance? Is it too late? What's wrong with me?" I saw the parade of faces and research as a kind of indictment: "How come you're not running the world yet?"

It was something of a surprise to find I wasn't the only one who felt that way. It was also a relief. And it was sort of funny, too, in how predictably everyone continued to want to (over-)achieve. It was a subject that came up repeatedly over the next day.

Of course there's something to be learned here. If I can look at these other high achievers and say "Hey, look, a second Ph. D? Dude, you really need to recalibrate your expectations"...well, maybe I need to look in the mirror and take some of my own advice.

"Diminished expectations" was a phrase kicked around a lot from age 18-22. That was when I and some of my more cynical classmates began to realize that hard work and raw talent were insufficient to guarantee success.

There were other factors at play that were just as much or more important than aptitude and effort, and often those other factors are the ones that really matter. Things like "who you know" and "how you look" and "being in the right place at the right time".

That was also around the time we began to realize there was also more to life than just work. I think of "Real Genius", a movie that affected my outlook in many ways. There's a scene where the two main characters are discussing a mysterious third person:


Chris: So, I talked to him.
Mitch: You did?
Chris: Yeah, and he used to be the number one stud around here in the 70’s. (whispers) Smarter than you and me put together.
Mitch: So what happened? Did he crack?
Chris: Yes, Mitch. He cracked. Severely.
Mitch: Why?
Chris: He loved his work.
Mitch: Well what’s wrong with that?
Chris: There’s nothing wrong with that, but that’s all he did. He loved solving problems, he loved coming up with the answers. But, he thought that the answers were the answer for everything. Wrong. All science, no philosophy. So then one day someone tells him that the stuff he’s making was killing people.
Mitch: So what’s your point? Are you saying I’m going to end up in a steam tunnel?
Chris: Yeah.
Mitch: What?
Chris: You are, if you keep up like this. Mitch, you don’t need to run away from here. When you’re smart, people need you. Use your mind creatively.
Mitch: (smiles) I noticed you don’t study too hard.
Chris: (smiles) Bingo.

You shouldn't compare your life, your self, or your achievements to anyone else. They are coming from a different situation, with different priorities. They make different sacrifices and are driven by different demons.

I will never forget the dark circles under the eyes of the girl who scored higher than me on the PSAT. She did very well in high school, but it was obvious she paid a substantial price for that success.

I think of my fellow TIP students, all of us considered precocious at one time, and now clearly "post-cocious". Potential is not a guarantee of anything. Achievements do not bring more than fleeting happiness. Aspire to being happy with who you are, not just what you do.

I liked your final line enough to want to save it:
http://www.flickr.com/photos/ecastro/7318701306/in/photostream

Thanks, Eric. But I have to give credit where it's due. That line is a compilation of 2 different lines from "Real Genius".