Who's Wrecking Your Product?

It really does only take one person to wreck a product.

Creating a product requires many things:
Ultimately, the product manager is responsible for all of the above. But in many companies, product managers lack the authority to enforce those items. In others, the key decisions are either made or overridden by senior management.
Steve Jobs Wrecked Your Product
Why blame The Steve? He's legendarily, heavily, deeply involved in nearly all aspects of product creation for Apple. Mr. Jobs really does make many, many decisions. And he's frequently, annoyingly "right", in the sense that Apple's products have sold extremely well since his return from exile.

Many books have been written about Steve Jobs and Apple, dissecting them both and seeking the reason for their success. I think in both cases it comes down to one thing: discipline.

Apple seems to realize the value of restraint. Less is more, especially in software. They initially launch with a sometimes laughably small number of features...but they all work, and work well. They slowly add high-quality features over time. This approach is very similar to the "kaizen" process that Toyota uses. Developing with discipline beats rushing out a feature-complete-but-buggy 1.0 and then trying to patch it.

Steve Jobs is very good at helping decide what to leave out. He understands that good products are narratives (like, say, Pixar films). They have a central theme which must be supported and reinforced.

Steve Jobs has caused 2 major problems for everyone else, though. And both are the result of being blinded by surface and style rather than focusing on deeper critical thinking.

Steve Jobs Wrecked Your Boss
Nearly every high-level executive I can think of secretly (or not-so-secretly) wants to be Steve Jobs. They admire his panache, life story, fashion sense, reputation, and of course, massive success.

Unfortunately for many, one of their takeaways from Steve Jobs is "I need to micromanage my product team". They insist on arbitrary product reviews with no clear next steps. They make changes without a strategic or tactical understanding, of the project goals. They don't stay informed about the product constantly, and rather like the Eye of Sauron, swing in to focus on it erratically and painfully.

They change the central theme of the product. They move goalposts. They revoke previous decisions.

Steve Jobs sets clear goals at the outset: Who's the ultimate decision maker? (he is, and he stays involved) What's the theme of the product? What are the resources? And so on.

If your supervisors emulate the wrong aspects of Steve Jobs, you may be wrecked before you even start. Getting around bad management is a challenge for the best product managers. Sometimes it is clear that bad management will wreck your product. It's almost always better to ship even a flawed product than to bail out, however.

The Cargo Cult of Steve (or, Your Company is Not Apple) 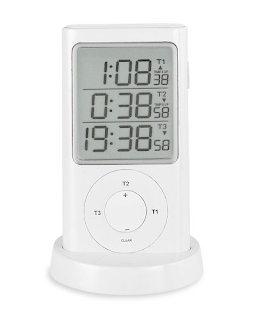 I have a kitchen timer that looks like an original iPod. Because it was designed and made when iPods were popular. It is a terrible, terrible product. And it is obvious the company that made it wanted it to look like an iPod to cash in.

While it is superficially similar to an iPod, in practice, it is the antithesis of what made the iPod popular. It takes a relatively simple product (a countdown timer) and turns it into something incredibly annoying and difficult to use.

Reasons why it's terrible? Off the top of my head:
It feels awful to use.

I don't know the folks who created this thing, but I can imagine the meetings where they decided (or perhaps the boss demanded) to adopt the visual language of the iPod without understanding the product thinking that led to that visual language. It is cargo cult thinking.

Products get wrecked when companies decide to emulate other products' surface appearance without understanding the thinking that created that appearance in the first place.

This is different from following "industry standards", "best practices", or even "trends". Those all have their place when they are conscious decisions made with intent.

Another frequently cited example is the use of 3D buttons and glossy effects. Apple doesn't make buttons glossy and 3D just because they "look cool". They do it to make the buttons stand out clearly from the rest of the flat, matte interface. Many other OS widgets (Android, Windows 7 for example) use glossy and 3D effects in a gratuitous fashion, and frequently the shiny highlight makes text less legible.

Design elements should never be gratuitous. If you're doing something for no other reason than "it looks cool", reconsider. That said, "looking cool" can add value provided you're not interfering with the rest of your product functionality.

Your boss might misunderstand Steve Jobs. Don't allow yourself or your team to misunderstand Apple and design in general. Make conscious decisions with intent. Think about what you are trying to accomplish and what would work best.

Let form follow function. Or at least make sure the form is informed by function, or you know what your trade-offs are. Innovative and exciting designs frequently spring from re-focusing on what the customer is actually trying to do, rather than merely sprucing up existing design conventions.

Don't let Steve Jobs wreck your product! Be disciplined. Make your own choices with intent.