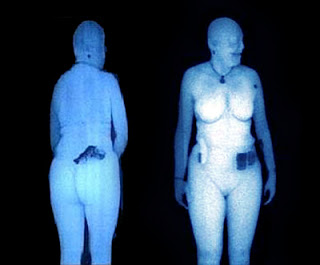 Recently several writers have noted the USA could help close the budget and deficit gap by eliminating the TSA.

Between that and my recent travels I recalled this post I read [edited for clarity and typos]:

Anon in reply to Shivv


The reason it's labeled "security theater" isn't just because of how ineffective it is, but because the whole idea of a threat in the first place is imagined. It's playing into people's fears, convincing them they're in danger, and they're saving you from it.

In reality, there are countless other targets that terrorists could strike.
They could do more damage in a large subway system, yet you don't have pornoscans at turnstiles.

Bridges would be great targets, but you don't need to strip naked to cross a bridge.

The Unabomber and the anthrax scare were committed in post offices, yet you don't have to have your crotch fondled in public to mail a letter.

The Oklahoma City bombing was caused by letting a truck park within a block of a government building, why don't we search everyone that comes within a 2 block radius of any building?

It's called security theater because it actually protects no one from anything.

The government can't save you from the bogeyman, but if they convince you they are, they can take whatever rights they want from you.

You have a higher chance of getting struck by lightning on a sunny day than you do of being victim of a terrorist attack.

Why not protect people from car crashes instead? Something that's hundreds of millions of times more likely to happen to you?

Why not spend millions of dollars and cripple your travel infrastructure to save people from slipping in the shower and breaking their necks? That happens thousands of times each day, whereas terrorist attacks happen once a decade.

After 10 years, we're stuck with a terrible, inefficient, expensive, and ultimately worthless airport security experience. Nobody can speak up about it because we're either too busy or too afraid (of terrorists, of the government, of being accused of not caring about people).

I've also heard accounts of supposed "freeze drills" where the TSA will yell "CODE BRAVO! FREEZE!" and actually expect and demand that everyone stand still like we're playing a game of freeze tag, or that we're all grade schoolers. I imagine they have everyone put their heads on their desks.

I hope to hell this is an isolated incident of TSA overreach. Otherwise I come to the conclusion that we are in fact living in an Orwellian science fiction future.

So far, way more TSA agents have been arrested for crimes relating to theft and abuse of power than terrorists have been caught. I think about that every time I shuffle along with the rest of the cattle through the line, angry with myself and my fellow Americans for letting it come to this.
at June 06, 2011

My thought process always went in the other direction: fantasies of "take your chances" airlines with no TSA, who will fly with a cracked fuel cap if a plurality of passengers are ok with it. A pipe dream, to be sure, but rooted in the same desire to avoid the useless and bloated spectacle.