I silently slip into my gym clothes, grab my bag, and head off for my morning workout. The sky is black and the autumn chill makes me shiver.

As I finish my workout with 30 minutes of cardio, the news is showing the Oakland Police forcibly removing the "Occupy Oakland" protestors. The news calls them "squatters". 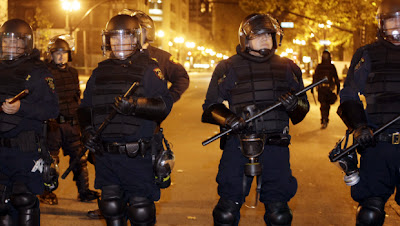 If the police were American soldiers in Iraq or Afghanistan, using these tactics and this behavior  towards other soldiers, much less civilians, would result in courts-martial.

The sounds, images, and storyline could be straight out of any number of video games.  It is surreal and disturbing.

I watch the senseless violence and will later listen to the mayor talk about "protecting public safety". I wonder how protected the hospitalized protesters feel.

Pop music from the Reagan era plays over the gym loudspeakers, plastic, oblivious, and upbeat. Everyone silently sweats, running on treadmills, watching the footage.

I drive home in the dark, try to get cleaned up, and wolf down a quick breakfast before climbing back in the car. I have an early meeting with a very large tech company down south.

I ease onto the freeway, past the traffic chokepoints, and am soon cruising down 280. I watch the sun slowly creep into the sky. A new baby blue Tesla roadster whips in and out of traffic, dodging the furry bags of roadkill littering the otherwise clean freeway.

280 is a beautiful drive once you're past Serramonte, and as long as you don't have to do it every day. All you see are trees and fog and the sun and canyons. The wide, fast road seems to embody the California mythos. The morning's nightmarish science fiction dystopia seems far away.

A few days later Oakland's mayor will deliver a statement, no doubt carefully crafted by Luntz-style language manipulators. I marvel at its clever, diabolical brilliance. She says all the real and peaceful protestors left a long time ago, and all that's left is the criminal element for Oakland to clean up.

Shortly it will be revealed that 18 mayors of "occupied" cities had a conference call, planned, compared notes, and agreed to disperse the protestors (conveniently, while the President is out of the country). The mayors get their story straight. They lock out the media and other observers. They send in the riot cops, who mace women and kids in the face. Who beat people with truncheons. Who harass and assault bystanders.

When this kind of crackdown happens in a single city overseas, there is government outrage and media support for the protestors. Think of the "Arab Spring". Now it's here in the USA, and it's happening nationwide. The crackdown is fierce and harsh, and the media is largely silent about the parallels, focusing on the sensational surface rather than the deeper drives. 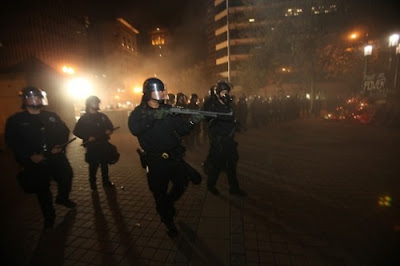 The mayors complain about how these protestors are costing the city money. The bitter irony is that we are all literally paying for this.

There have been reports of horrific things (including beatings, robbery, and rape) happening in some of the camps. The police provide little investigation or help. They are implying (and sometimes stating outright) that it's what happens when you protest, while simultaneously using these incidents as justifications for the crackdown.


This all sounds implausible, and yet every bit of it is true.


I have mixed feelings about the "Occupy" movement. I have yet to discuss it with most of my friends.

But it is easy to see why people would be upset. (If you read nothing else about the "Occupy" movement, take the time to page through that article. Maybe this, too.)

And a few things seem very clear to me as I drive back home, the sky darkening fast at day's end:

Whatever Occupy stands for and may have done, the reaction from the establishment - from the local mayors, from the banks, from the cops - is extremely telling. Occupy isn't setting cars on fire and smashing windows en masse (yet). They're marching and chanting and drumming and holding signs and...sitting there. But they've been subjected to a fierce crackdown. It's not clear exactly what Occupy's goals or demands are, but their existence is obviously terrifying the existing power structure.

Thus far, the Occupy people have been largely peaceful and non-violent, especially given the shockingly excessive police response. That won't last much longer. Young people with nothing to lose (and little grasp of consequences) won't take much more beating, spraying, and tasing before they start fighting back. Hard. First defensively, then pre-emptively.

This will not end well. We all think of Kent State.

When I look at the news footage, I see a small number of old, fat, clean people in suits behind the microphones defending the status quo, and many young, hungry, dirty people on the other side. Historically, in these types of conflicts, with those sides, the young, hungry, and dirty win. And when they do, there are lasting, violent, and painful repercussions for the old, fat, and clean.

The dialog and trajectory of employment in America in 2011 feels like a return to feudalism. You have a very small number of extremely rich "job creators" (the lords) who claim they need to stay rich and privileged so they can "create jobs" for everyone else (the serfs). Nobody wants to admit they're a serf, and in America we believe we can rise up (through hard work or luck) to be a lord and have our own serfs, so why rock the boat?

Since Occupy doesn't have simple, clear objectives, it's difficult for any negotiating to happen, especially at the municipal level. The Mayors have no power to force banks or Wall Street to change. It's difficult to see how Occupy itself can actually accomplish anything, other than serve as a very potent symbol of public unrest and increasing injustice. Because Occupy lacks a specific agenda, it risks losing control over its own narrative. Or worse, simply turning to violence and property destruction.

But when I see ordinary Americans harassed and physically assaulted by the police for exercising their right to free speech, or even for merely attempting to observe what is going on between the protestors and the police, it makes me angry and fearful for the future of our democracy. And if America can't make democracy work, what then? For us, and for the world?

Somehow we ended up in a country where "corporations are people", "money is speech" and income inequality is quickly increasing. The result of combining those elements is as chilling as it is clear. If that is what our own government, police, and employers are protecting, it's time we all head down to the barricades. 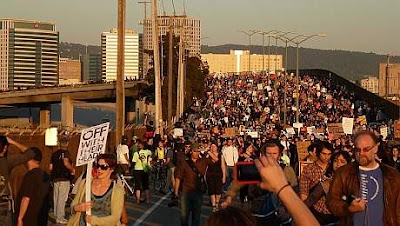