It's hot in Tokyo. The jetway, the airport, the train platform are filled with warm air. I feel the sweat running down my chest behind my t-shirt as I drop into my seat on the Narita Express. Despite all the travel, I'm not crushingly tired yet.

I've been to Tokyo before in July. 23 years ago. I turned 21 here, sweating, alone, with my wisdom teeth tearing up the insides of my cheeks. I bought a beer and some junk food from the 7-11 with some of my precious funds to celebrate.

It seems like a lifetime ago. Then again, I suppose it was. More time elapsed since than the 21 years I was celebrating.

I snap a photo of myself reflected in the window. 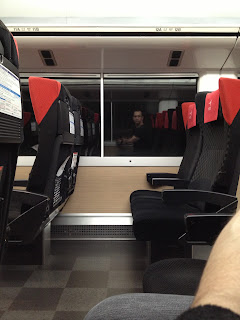 The distant and slightly blurred view looks great, I think. A ghost or a memory. A reflection of another train or another time.

As we start to pull away, I run through the list of things on my mind these days. There's so little I can actually do anything about. So many of my concerns seem to have a solution of "take it easy, don't do anything." Oddly enough, that inaction somehow seems much more difficult.

I wipe my brow with my wristband and listen to some music, using the new offline feature in the Music Unlimited iOS app. It mostly works.

When I was 21, I had a Sony Walkman with me for music here. I remember listening to a lot of albums I didn't like at the time, trying to figure out why I didn't like them and if there was anything good about them. Danzig. Gene Loves Jezebel. Those stick out as the worst. I can't remember what else I had, other than a cassette of mixes for my first "real" solo album, Zero Summer Game. I'd lose that cassette in a club with some teenage models. Worth it.

The sun sinks quickly, and by the time I'm at Shinagawa eki, it's nearly dark. I don't even remember how I got from the airport to the city on my trip here 23 years ago. I don't even remember which airport. But like this time, there was nobody there to meet me. Just me, a guitar, a suitcase. Finding my way. Ready for adventure. Sweating.

The train station feels like the inside of someone's mouth, hot and moist. I roll through the rush hour crowds to the taxi stand. I use my limited Japanese language skills to ask the driver to take me to my hotel of choice. I have lost count of how many times I've been here in the last 18 months, but I've stayed at enough of the local hotels to know which one I like best. We glide off, and I try to relax, rolling down the window in the back seat as we roll through Shinagawa.

When I was here in the summer of 1990, I stayed briefly at the Keio Plaza hotel in Shinjuku, basically long enough to sleep off the trip before a brief stay with a friend's family and then taking over someone's apartment. I can't remember much about the hotel other than being exhausted.

At the hotel, I check in and dump my bags. It's nearly 7 pm Tokyo time. I've been awake for something like 22 hours so far. I change into my gym clothes and work out. My hip is complaining, so I stop running after a few minutes and switch to the stationary bike.

I get cleaned up, have some food, and drop into a deep and sudden sleep.

The next few days are a blur of meetings. It's a better trip than most, despite the infernal weather. The building is cooler inside than last year. It's bearable, pleasant. Sad to say farewell to a departing colleague. Some fun dinners, or at least fun until the hammer of jet lag comes down. At the hotel, I can barely get out of my clothes before collapsing from fatigue. There is absolutely no free time during the entire trip.

And almost before I know it, it's Friday afternoon. I'm back on the Narita Express, heading for the airport, the finish line, lifting up into the skies, memories of this trip, other recent travels, and my own ancient history swirling in my head.
at July 14, 2013