A year of loops, analemmae, routines. Departures and returns. Treadmills metaphorical and literal.

At times, even the most remarkable things seemed mundane, and the most mundane seemed remarkable. 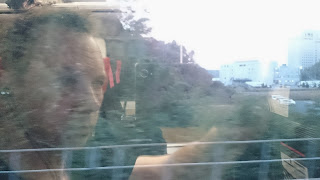 I was fortunate to spend time with family and friends on my trips around the world. Happy to even take said trips, even as the pace and schedule grew punishing. I have particularly treasured crossing the finish line in mid-December and spending some time at home, doing not much more than cleaning, sitting, reading, playing video games, and updating computer software.

I lost my voice for nearly 5 months. It came back.
I went to the gym. I came back. I went from being the heaviest I'd ever been in my life to being as fit as I was at my mid-20s rock star peak.
I lost 20 pounds. I hope they don't come back.
I went away - SFO, LHR, NRT -  and came back more times than I can count.
I lost my temper more than I would have liked. It came back, too.

I regret not spending more time on music this year, but something had to give, and once my voice was gone, it was easy to make that call.

I am particularly happy to have spent time with my friends at home - this was a year of building friendships old and new, and spending time with people I enjoy. More of that in 2014, I hope.

“If something is boring after two minutes, try it for four. If still boring, then eight. Then sixteen. Then thirty-two. Eventually one discovers that it is not boring at all.”


Every repetition brings with it the possibility of new discovery, and with each repetition, subtleties become more and more important.

I learned a lot about myself this year. I am growing older, for better or worse. More gray hair. Slowing down. Some things become more difficult. Some become impossible. And that's OK. A very few things get easier.

Just because you've seen the clouds at 30,000 feet a few times doesn't make them any less beautiful. Sometimes they are transcendental, even when everything hurts and you're tired. 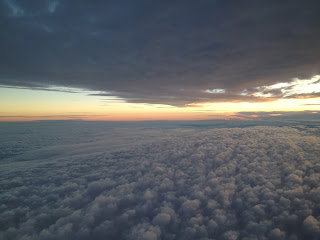 The computer on my wrist gently pulses, waking me up. It is dark. Wherever I am, it is probably between 5 and 6 AM. I was sort of awake anyway, and still tired.

I get up and fumble into my workout gear. Within a few minutes, I am on a treadmill. Wristband, headband, Jawbone Up, Polar heart rate monitor. A scrap of paper with scribbled numbers.

I am at the airport, in the short line. I look up at the vast ceilings, the glass walls. I have time to marvel at all of it.

I am in the lounge, typing on a computer. Listening to music.

I am in a business class seat, feeling the rumble of the engines. 10 hours remaining. I am so tired, but I have so much to do.

I am in a hotel room, somewhere. There is a tray of demolished room service food. Sweaty gym clothing hangs in the bathroom. Showered, I sit in a chair and type on the computer. I look over at the bed, and count the hours until I can sleep again.

950 miles run, about 20 per week
20 pounds lost from February to November
10 minute mile averages
5 pounds maximum differential before and after 10 mile run
at December 31, 2013