The events currently unfolding in Ferguson are astounding and revealing. While race is a major element of the problems there, the situation in Ferguson has also made dramatically clear how far the United States has moved from its theoretical ideals of liberty and freedom, and how broken policing has become.

Within the last few days, freedom has been erased, dissent has been suppressed, journalists have been detained for no reason and assaulted and/or threatened by police. From where I sit, police have become unrecognizable.

Look at this now-famous photo: 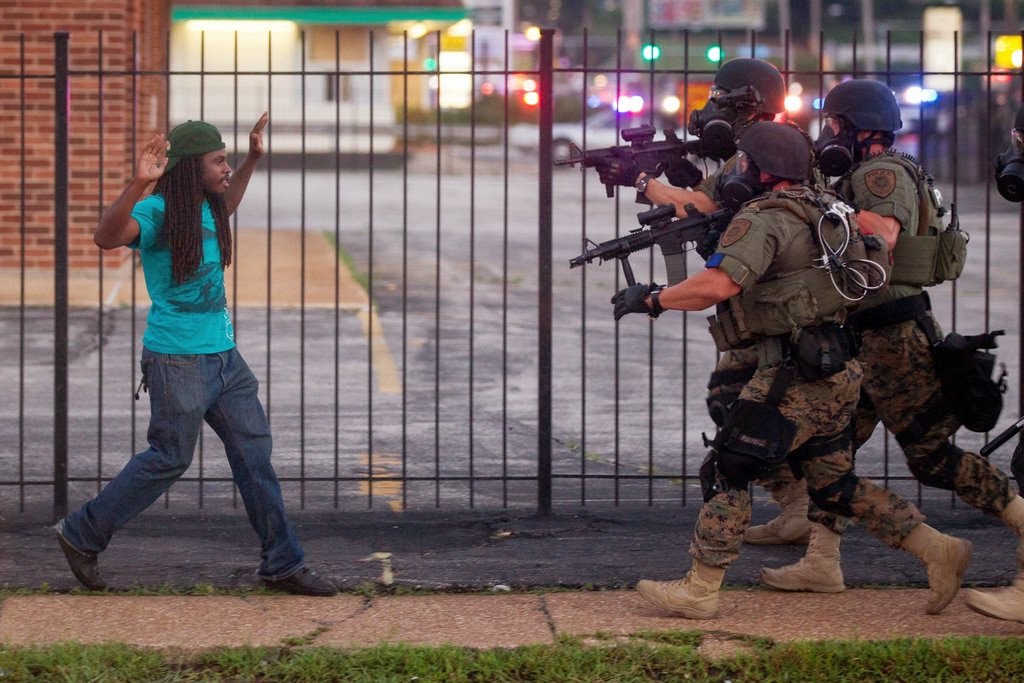 What do you see?

I see white men pointing weapons at a single black man. I see soldiers, not police. I see hidden faces for authority, which means no accountability. I see overwhelming force being deployed inappropriately. I see at least 2 assault weapons pointed at an obviously unarmed man with his hands up. I see a man retreating while authority advances on him.

There's another photograph taken from behind the guy in the blue shirt which shows there are actually even more police pointing their guns at him, and in every direction.

Who are these "police" keeping safe? Who are they serving and protecting? It sure as hell doesn't seem to be the residents of Ferguson.

It is not much different than what happened with the Occupy protests in Oakland and elsewhere. But unfortunately at this point, the disproportionate military-style response to protest seems to be the default, rather than the exception.


A few days ago a man claiming to be a police officer wrote an astounding Op-Ed piece basically saying "if you don't do what I say, expect to get a beatdown." This disgustingly ignorant and inappropriate view of police power is not limited to the police. Many citizens -- especially those who have had run-ins with the police before -- have the same viewpoint. The (ignorant) media even espouses this reaction.

So even though We The People have rights in theory, in practice we all start to believe we should just shut up and keep our heads down. Well, the whole point of having rights is not theory, it is that you can exercise them in practice.

How did we end up in this kind of America?

We built this dystopia ourselves.

In the wake of 9/11, America had a full-on freak-out. Whether justified or not, the panic and fear in the people and the leadership started America down a path of rolling back liberty in the name of security.

Within a decade, the government started openly torturing people, suspending habeus corpus, ignoring due process, spying on its citizens, killing its citizens without trial, and militarizing police forces.

Because We The People said nothing and did nothing, we condoned this behavior implicitly. In some cases, people encouraged it explicitly. In our terror, we ran to our appointed leaders and said "do whatever you need to, just please, keep us safe!"

Do you feel safer yet?

Do you think the people in the Occupy protests and the cities that hosted them feel safe? While some protests turn(ed) violent, the role of the police in escalating the situation cannot be understated. The police didn't arrest people en masse. They turned up in their riot gear, turned on the klieg lights, and started firing tear gas.

Did you know that tear gas is technically a chemical weapon, and that it is not "allowed" for use in warfare?

The police claim everyone is "resisting arrest" or "going for my gun". Uttering these magic spells now gives the police the power to do anything: detain you (without charges), beat you, or just shoot you dead in the street.

Do you feel safer yet?

Cameras everywhere are not the answer, though many think they are. Cameras only provide selective truth. Relying on cameras reduces or negates the value and truth of eyewitness testimony. We enter a world where it's only true if it was recorded (pics or it didn't happen!). And cameras don't protect. They just document the damage after the fact, which is cold comfort if you're beaten or shot. Cameras address a symptom, and not the problem.

The right solution is stopping these problems before they start. People shouldn't need the Panopticon or the eye of God on them to behave. Cameras everywhere corrodes liberty.

Every time we shut up and do what the cops say without asking questions or exercising our rights, we embrace tyranny. Every person out there who blindly supports the police without knowing what their rights are is quite literally an enemy of freedom, an enemy of the founding fathers' America. Every time we allow this behavior, we move closer to being the next target on the police's list.

Soon, even questioning any of this becomes cause for suspicion, and eventually, a crime.

Maybe you can look the other way for now because you've got the right color skin, or because you've got money. But sooner or later, it will be your door kicked in by the SWAT team, you looking down the barrel of those guns, and you being shaken down for cash. Will you feel safe then?
at August 23, 2014