Prince Rogers Nelson was an incredible musician by any standard. 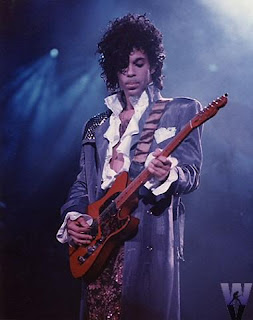 He could play guitar, bass, drums, and keyboards with great proficiency. He was a restless and creative composer who quickly pushed himself out of one genre into another and eventually moved into his own genre altogether. He was a challenging bandleader who forged strong links between his players and made sure that his band could play all the parts he wrote perfectly, and dance while doing it.

Prince wrote hits, and not just for himself. His songs provided number 1 or top 10 hits for countless artists in his 80s heyday, including Sheena Easton, The Bangles, The Time, Sinead O'Connor, Chaka Khan (!) and of course, Sheila E.

Like many of the other musicians that influenced me, Prince was an "I do it all myself in the studio" person, who wrote, played, produced, and recorded. His use of technology became a signature, not a gimmick. Prince pulled distinctive sounds out of otherwise banal instruments -- his pitch-shifted Linn drum beats and squealing guitar tones are unmistakable. And then there's that fantastic voice, capable of moving from a whisper to a scream, from a cartoonish low register to an angelic high.

Prince had a very particular personal muse he was chasing. Prince sang about love and sex, god and earthly matters, and he did it his way: frank, obtuse, weird, and beautiful. His albums weren't overtly concept-y, for the most part, and still they had themes and palettes and vibes.

His run of classic albums, starting with "Dirty Mind" and running up through "Lovesexy", is hard to top. The depth and range of songs is remarkable, and his best albums take you from hopped-up dance-along hooky pop songs to steamy slow-jams, always with a few bizarre detours. It never feels artificial or stagey.

Prince was an artist that all of my friends could appreciate, whether new waver or punk rocker or mainstream person or whatever, everyone knew Prince was amazing. His music could start a party, and his albums were always good for listening in intimate situations.

Prince was "the real deal", a musician's musician who could talk about and appreciate artists ranging from Gary Numan (whom Prince said was "a genius") to Joni Mitchell (who Prince often cited as his favorite musician of all time).

In some ways, Prince was the opposite of Bowie. Prince was always PRINCE -- there was no other mask, no other costume -- but who Prince was kept changing, as he aged and the world moved around him. Unlike, say, Madonna, Prince managed to get older while retaining some dignity, and was comfortable being an amazing musician  without having to constantly be in the spotlight or on magazine covers.

I kept listening to albums after 1989's disappointing "Batman", wishing he would make something else I liked. He would occasionally bust out an incredible hit, just to prove he could whenever he wanted. But his music in the 90s and beyond, while competent, lacked the weird fire that his earlier stuff had.

I doubt it is because he got "worse" at music. I think instead he simply decided he didn't care about pleasing anyone but himself, and what pleased him was different than what pleased me. Nothing wrong with that, and even when I didn't like the records, I could always appreciate the skill and craft.

Goodnight, sweet Prince. We shall not look upon your like again. Thank you for the music.
at April 21, 2016