Isao Tomita was a remarkable musician. Inspired by Wendy Carlos' synthesized Bach success, Tomita took on more orchestral pieces with more elaborate arrangements and added his own aesthetic and attention to detail. His list of famous synthesized covers includes "Firebird", "The Planets", "Pictures at an Exhibition", and several of Debussy's pieces.

Today, "one-man bands" building entirely synthesized records in their own personal studios is commonplace, but back when this album came out, it was an incredible achievement. All the more so when you realize how primitive the equipment was, and how rich and detailed Tomita's sounds were. And of course, all of his synthesizers were monophonic, too. 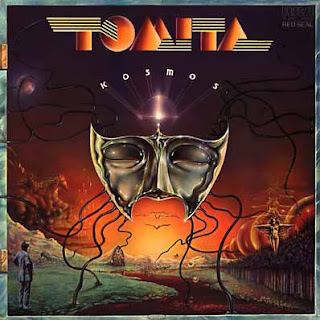 His "Kosmos" was one of the first records I heard, and as the years have passed, I have come to realize it left a very deep impression on me.

"Kosmos" was released in 1978. I was 9 years old, and already a hyper-cerebral nerd.

I studied this massive gatefold record intensely. I noted the trompe l'oeil hinges on the spine of the gatefold. How the cover image was itself an image set onto the "steel" of the rest of the art.

The interior of the gatefold showed Tomita sitting in front of his massive Moog modular system, fading into a desert vista, showing you  how he saw sonic landscapes.

The record also featured fantastic liner notes, with Tomita explaining each of the pieces, why he had chosen them, and what they meant.

It also included a comprehensive and fantastic gear list. My mind was blown reading that this record had been made using things like the "Eventide Instant Phaser" and "Roland Dimention IV". Just reading the names of the equipment was exciting.

The record itself was fairly broad. Aside from the somewhat pandery/commercial "Star Wars" theme by John Williams, the album includes a wide range of composers: Bach (Ich Ruf;zu Dir, Herr Jesu Christ/BWV 639, used for "Solaris"), Wagner's "Ride of the Valkyries", Charles Ives' "The Unanswered Question", a bit of Grieg's "Peer Gynt", and Rodrigo's "Aranjuez" (which Miles Davis had also transformed).

I was initially attracted to it because of the novelty of synthesizer sounds, and because it had a version of the "Star Wars" theme on it. But the mystery and emotion in all the other pieces made an impact as well, and nearly all of the pieces on the record ended up being discussed in my "history of 20th century music" class at TIP.

The record sounds both dated and timeless, a strange take on a strange selection of pieces that somehow fit together nicely...though these days I always skip "Star Wars".

Whether great or cheesy, this record became a part of my musical identity in fundamental ways: The sonic exploration, the love of "weird", the melodicism, the space (in every sense of the word). It was an explicit reference when I was working on my first few Captain Kirk records.

Thank you for the music, Tomita-san.