Eddie Van Halen and his brother founded the band that shared their last name in 1972. Eddie made his name and his fortune writing songs and playing guitar in that band, whose self-titled first album was released in 1978. 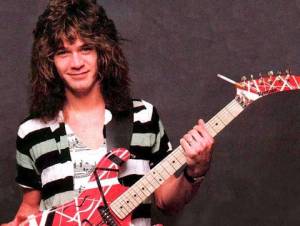 Ed was a guitar hero, and still frequently tops lists of "best" and "most influential" players. He is credited with inventing two-handed tapping, a visually flashy technique where players tap the strings on the guitar's neck with both hands. It is itself a logical extension of the "hammer-on" and "pull-off" techniques, but Ed did it first, producing blazing runs of 16th notes and inspiring generations of teenaged players.

His playing had a style, which, while squarely in the "hard rock" camp, was broad and unique. Ed seldom just hit a basic chord and let it ring. He wrote interesting guitar parts that covered a space between chords and single notes.

Ed also cared a lot about guitar sound and guitar technology. He famously discovered that by starving his tube amps of current using a "variac", he could get the sound he wanted from his amp. He developed his own "brown sound", a unique, distorted guitar tone that retains dynamics and detail. He also had a shimmering clean tone, all enhanced by bits of "jape" -- his term for his effects, a tape delay, phasing, flanging, and chorusing, deployed as he liked.

He built his own guitars from parts, with a deliberately raw and primitive aesthetic, offset with his bold home-created striped paint jobs. He was constantly tinkering with different ideas.

He was also a solid piano player. Many of his songs were written on keyboard first, and a number of Van Halen's biggest hits were driven by keyboard, rather than guitar -- notably "The Cradle Will Rock", "Jump", and "Why Can't This Be Love"

Ed was more than a riff generator, he was a songwriter. Yes, he created those intricate and interesting guitar parts, but he often wrote the vocal melodies and harmonies, too.

He also famously contributed the guitar solo to Michael Jackson's "Beat It"...the subsequent success of "Thriller" kept Van Halen's own album 1984 from the #1 slot, and Eddie's brother Alex never let him forget it.

Ultimately, his music brought happiness to millions of people, and his playing has inspired guitar players for over 40 years. Few people have ever had that kind of impact, and it is difficult to imagine anyone else having that kind of impact in the future.

He Gave Me A Guitar

I met Ed in the late 1990s. I was working for an audio technology company, managing their professional products. I was working from the Mountain View office when the receptionist told me there was an "Edward Van Halen" on the phone to talk to me.

I looked around the office and said "very funny, guys...sure, put 'Mr. Van Halen' through." Once I heard the voice on the other end of the phone, I instantly knew it was actually him. He wanted to try out some of our products in his 5150 studio at his compound in the canyons between Los Angeles and the San Fernando Valley.

A few days later, I dropped the gear off and was quickly hurried off the premises by the chief engineer. But about a month later, when I returned to pick up the demo unit and drop off the units he purchased, Ed came rolling up in a golf cart, wearing cow-print pajamas. It was close to noon, and he looked like he had just gotten out of bed.

He introduced himself ("Hi there, I'm Ed!") and we talked for a few minutes. He said he thought I was going to be older. He asked me if I played guitar. I told him I did. He smiled big, and walked over to his garage.

As he pulled the hinged door open, he said "I wanna give you a guitar and an amp!" I was stunned. He said "I am really proud of this guitar, it's my favorite one I've worked on." He pulled out a plastic case, set it down on the driveway pavement, and opened it up. I was looking at a Peavey EVH Wolfgang, with a sunburst top. He said "It's yours, man...lemme get you a stack, too".

I told him "I never in a million years would have believed I'd be standing in your driveway while you hand me a guitar." He just smiled that goofy smile of his and said "the amp doesn't sound good unless you turn everything up to the max." I assured him I would.

I couldn't even fit it all in my car, and left the 2nd amplifier cabinet at his place. I drove home in silent shock. "Eddie Van Halen just gave me a guitar." I never did go back for the bottom cabinet.

Of course, when the team at work found out about it, they were incredibly jealous.

I still have the guitar. I didn't have him sign it, as I thought that would have just been tacky. Though it is both valuable and desirable, I will never sell it.  It's not a collector's item, I play it. It has a few dings and scratches. It is one of the nicest-playing guitars I have, with a comfortable (for me) short(er)-scale neck.

It has a "D-Tuna" that lets you instantly change to a drop-D tuning, along with an Ed-approved Floyd Rose vibrato system. The dual humbucker pickups and overall sound of the guitar mean it serves as my "hard rock" guitar. The EVH fills the space in my collection that a Les Paul might normally occupy for other guitar players.

Thank you for the music and the guitar, Ed.

"Eruption", perhaps his best known display of his technique:

"Hear About It Later", one of my favorites, showing off his musicality and playing range: