Remarks on the end of TIP

[The first wave of TIP students held a Zoom gathering this weekend to mark the end of the Duke University Talent Identification Program. I was given the honor of providing the opening remarks, which are reproduced following.]

Thank you for joining today, and for giving me the opportunity to address you all. I wish it were under different circumstances, but I am grateful all the same.

I last spoke at a large TIP gathering in 2011. It feels like a lifetime ago — so much has changed for us as individuals, and as a society.

These last few years have been personally challenging, this one in particular. TIP’s end is one more grim casualty of 2020.

I feel a deep sense of grief and loss at the news of TIP’s closure because of what TIP did for me. It had a direct and transformative impact on my life. Not just as a teenager, but as an adult as well.

I think about how many of you were friends then and are still friends now, because of the special connection we shared at a critical moment in our lives. I think of how those friendships have persisted and grown as you have turned into such remarkable people. It is difficult for me to fully convey how important you all are, and how much I treasure these relationships and how they have enriched my life.

I also grieve the loss of what TIP represented and meant. The best days of my youth, if not youth itself. The joy of running fast and free, physically and intellectually. The sense of endless possibility and discovery. TIP’s ongoing existence made it easy to tap into those feelings. Seeing first-hand how TIP still had a similar impact on kids decades later provided a sense of continuity and community. I was proud to support the organization and deeply gratified to see its mission continue.

I acknowledge any experiences I would have had during those critical summers of my youth would have likely been transformative and defining, and that friends I made during that time would be important. But I didn’t have just any experiences or meet just any people. I went to TIP. I met all of you.

Beyond personal significance, I am dismayed at the loss of what TIP actually was to the larger world: a program to identify, support, and cultivate talented kids. Particularly those who needed some kind of help, or were in difficult or isolated environments.

40 years after TIP’s founding, our society is more aware of people, particularly kids, who are different, unusual, or gifted. We may not be achieving the level of attention and care we strive for all the time, but at least there is more recognition of special needs for individuals. That is a significant improvement from what many of us experienced as children at home, in school, in life.

Some of that is directly attributable to the work of TIP and similar programs. Some of it is because of people like you, who grew up and tried to make the world a better place for those who followed.

There are also more resources for gifted kids, their parents, and educators now, and those resources are more widely available. Again, at least partially thanks to TIP, which set an example, inspired, and provided materials and programs. And thanks to some of you, who became educators, researches, and writers yourself.

The internet has also played a significant role. The internet has made it easy to distribute knowledge and materials related to gifted education. There are videos and classes and online programs, all easily accessible.

The internet has made it easy for people to feel less alone, to find others like them, and stay connected in ways we perhaps only dreamt of 40 years ago, when a long distance phone call cost nearly $1.50 per minute in today’s dollars.

But as COVID and social media have shown us recently, the internet, for all its wonders, is not nearly as good as real life. The virtual world can be superficial, hollow, and unsatisfying, if not actively harmful. Not all people possess the self-discipline required to succeed in fully digital education experiences. Not all people even have access to the technology, much less the training, to fully take advantage of what is offered.

Real life, real connection, is better. There is something special that happens when you bring people together in one place with a common cause. We felt it on East Campus 40 years ago. We felt it at the reunions we have had.

That spark of connection is essential, vital, and worth cultivating. I notice how it is muted as I address you now, over the internet. I am deeply saddened knowing it has been extinguished for future students.

After 40 years, TIP had obviously changed quite a bit. The program was much larger, for one thing, and reached far beyond Duke. The kinds of classes on offer had changed as well. Less hardcore. No more college or high school credit, for better or worse. Less freedom for the kids. More structure. Traditions. Rules. It had become a much less stressful and improvisatory environment. That is probably a good thing. Probably.

As one of you pointed out to me, TIP’s existence and success as an institution meant that it had become a kind of checkbox for college applications, with some students doing it solely for that reason.

On balance, I think that’s all OK. The world has changed quite a bit as well. Ideas about what’s acceptable and appropriate for kids have changed, too. Perhaps TIP was a kind of mirror, reflecting ideas and ideals around gifted students. Over time it had to change, as our own reflections have over the last 40 years.

But despite TIP’s influence and society’s improvements, one core aspect of TIP’s mission remains unfulfilled: Supporting underprivileged kids. Students who don’t come from backgrounds or environments like I did, where schools had decent (for the time) gifted programs. Or parents who could afford to invest in their children’s potential, like mine did.

Over the last 40 years we have seen our society become less equal. TIP had increased its efforts to reach those under-served kids. I commend that ambition, as I wish they had done even more.

And ultimately, that is where I most keenly feel the sadness and mourn the loss. Not for our shared past. Not for the compromised present. But for the possible future.

TIP wasn’t perfect, but it existed. It tried and sometimes succeeded in achieving lofty and ambitious goals. Like us.

I missed it terribly when it was over for me. I miss it even more now that it is over for everyone.

Thank you, Dr. Sawyer, for creating this experiment and bringing together all of these people for so many years.

Thank you to Dr. Greg Kimble and Mark Delong and Dr. John Kane and the countless other instructors and TAs who spent their summers (if not entire years) making TIP happen.

Thank you, Deborah-Kay, Shawna, Tasha, Vicki, Brian, and the other staff who kept the program running, growing, and thriving for so many years.

Thank you Andrea, for your tireless efforts in building and maintaining our 80s alumni group. Thank you Jonathan Wilfong, as well.

Most importantly, thanks to all of you for participating then and now.

You all have made a difference in my life, and the lives of many other people. 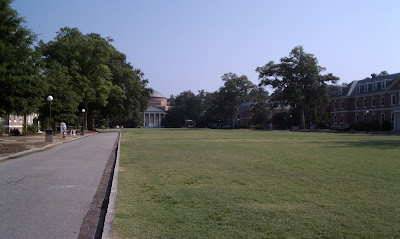