This morning, The Wife observed that the Republican candidates are each embodiments of a different cardinal sin. We discussed it over the Sunday Times and here's the result:

The wives, the affairs...I'm surprised Rudy never tried to be a rock star. But clearly he's driven by a strong desire to get laid.

On the plus side, if elected he will inevitably provide more fodder for proof of Republican hypocrisy on the issues of marital fidelity and their favorite bogeyman, Bill Clinton.

This guy ate himself up to 300 pounds by age 40 and more or less gave himself diabetes. Wrote a book about losing weight. (This may be a cheap shot, but it is what kicked off our whole discussion.)

Greed: Mike Huckabee
Unfortunately, we have to list Huckabee here again, as the man has a documented history of lining his own pockets. Of course, these are the Republicans we're talking about, and really, any and all of them could be listed under here as well.

If Fred were any lazier, he'd be sending his PA out to do his whistle-stops and stump speeches. Given his recent performances, this might actually be a better campaign strategy: Build the Myth. His campaign has seriously tried to pitch him as viable because he "looks and smells Presidential".

He entered the race late and even his own campaign team has to remind him he needs to actually try to get elected.

His extraordinarily harsh stance on illegal immigration places him squarely in the "wrath" category, pushing out Alan Keyes. He actually gets even angrier that other Republicans get anywhere near his fury about illegal immigration, and accuses them of trying to "out-Tancredo Tancredo".

McCain was a contender here, but his wrath is all the "sound and fury, signifying nothing" type. He talks tough, but watching him hug George W. Bush and endorse him after all the campaigning and having the Bush campaign label him as mentally unstable...well, it's all an act. McCain is as truly wrathful as Grandpa Simpson. Dana Carvey's "Grumpy Old Man" is has more honest wrath than McCain. Also more entertaining.

Tancredo, on the other hand, got in a screaming match with Karl Rove. 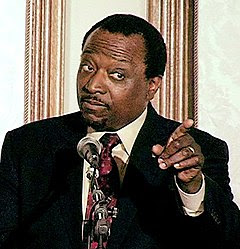 He was detained briefly during the 1996 campaign when he tried to force his way into a debate to which he hadn't been invited.

Always the bridesmaid, never the bride. I hate to break it to you Alan, but you're not going to win this time, either.

Romney's feeling that he is "one of the chosen" comes through in every picture, speech, and public appearance. He is convinced that he is better than all of us and will not rest until he is literally ruler of the entire world. A recent New York Times article documented his annoying compulsion to "top" any statement anyone else made, even if he had to lie to do it.

The irony is delicious. Seven Deadly Dwarves. Does that make Hillary Clinton the Snow White in our increasingly tortured analogy?
at December 16, 2007