I'm a bit uncomfortable joining the ranks of people and organizations "looking back over the 9/11 decade", because it's an extremely depressing exercise. As practiced by most, it's also excessively sweetened and adulterated with an insincere and shallow analysis of how the USA has reacted, and what it's all meant.

Where Was I?
I had been working late. Very late. Rhapsody was racing towards its initial launch. My small team (myself, another product manager, a developer, and a designer) were working hard to complete an HTML-powered demo of Rhapsody for a presentation to the Listen.com board of directors. We'd been working late all week, and on September 10, 2001, we worked until about 3 AM.

As I rode my motorcycle home, I thought about how long it had been since I'd stayed up that late working, and I wondered how I would function the next day. I got home, slept until 7 am, and then stumbled into the shower. As I was getting dressed, I checked my e-mail. This was before RSS feeds, so I had set up CNN to e-mail me about any notable events.

One email headline said a plane had crashed into the World Trade Center. I figured it had to be a hack, a joke, or spam. Then, scrolling up, I saw a message about another plane. And another about the Pentagon. I turned on the TV as I finished getting dressed. I watched the news for about 20 minutes, seeing the footage of the crashes and the shock of the anchors.

I left for work.

At the office, people were mostly standing around in shock. One of my coworkers came in the front door, saw everyone milling around, and asked me what was going on. I said "someone has crashed jets into both towers of the World Trade Center and the Pentagon." He laughed. I said "no, really. I'm serious. This is bad." He took off for the TV room.

I sat down at my desk and started working.

Around 10 or 11 am, the CEO gathered the company together and told everyone to go home and be with their families. Except me and my team. We were supposed to keep working to finish our demo.

At lunchtime I walked several blocks, trying to find a place open to get food, watching the empty skies for planes. I was listening to the quieter pieces on "Drukqs" by Aphex Twin, and that album continues to summon a kind of desolate, fatigued, melancholy when I hear it.

We kept working. Around 7 or 8 pm my girlfriend called me. She was upset and wanted me to come home. I told her I had to finish up and I would be a few more hours. I'll never forget how scared and alone she sounded, and how bad I felt when I hung up the phone. I left about 3 hours later, told the team to knock off for the day.

We finished the demo the next day, and of course found out the board meeting had been cancelled since no planes were flying.

While at work during those next few months, however, I'd spend a lot of time thinking about what had happened. I was moved to tears several times watching the footage, looking at photos of the reactions from around the world, and hearing various stories of the survivors, the people around the world. I was fortunate in that I did not have any direct connection with anyone killed in the attacks - surprising given how many people I know in both DC and New York.

History and The Gulf War 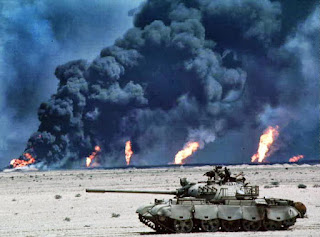 My family has a strong connection to the United States military and government. My paternal grandfather fought in many wars for the USA and devoted his life to advanced military technology for its benefit.
My father worked for intelligence agencies, helped stabilize the nation's faltering economy in the 70s, and worked to clean up many of the USA's most toxic sites in the 80s.
My maternal grandfather worked to supply military bases around Europe.

I remember turning 18 and driving myself to the post office to register for the draft. The woman behind the counter accepted my card, checked it over, and said "Hey, happy birthday!" I understood that part of the price of living in the USA was being prepared for military service.

I wasn't happy about it, but I naively felt the world (at least the USA) existed in a time beyond full-on war. But when I was attending college in 1990, President Bush attacked Iraq in response to Iraq's invasion of Kuwait. Operation Desert Storm, or The (Persian) Gulf War (I).

My fellow students and I were worried. We understood that "this aggression cannot stand", but there was a lot of debate about whether the USA (as opposed to the UN) was obligated to do something, or whether or not it was even worth doing anything. The USA was not in direct jeopardy, and Kuwait was hardly a top-tier ally.

I remember this well because I felt it was somewhat inappropriate (this was a class on "creative video", after all), but I found myself moved by thinking through everything this meant. I wrote something to the effect of "I don't want to go to war, I don't want to kill people, especially under circumstances where our country is not in direct jeopardy...but it's part of the price of being a citizen. If I don't like it, I need to stand up and tell our 'leaders' and end the war. Not because I'm afraid of killing or dying, but because war is irresponsible and stupid."

I recall my peers saying "it's going to be Vietnam in the desert - the resistance will be dug in, and we'll be there for years. We won't win. "Victory" is impossible in those conditions."

Miraculously, though, the Gulf War was short and contained, and none of that happened. My peers and I figuratively and literally dodged a bullet. 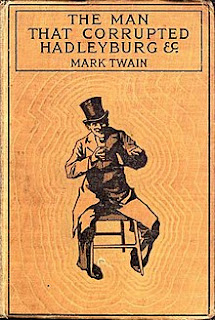 The USA's societal and political responses to 9/11 have been depressing and frightening.

When I was in grade school, I read "The Man That Corrupted Hadleyburg" by Mark Twain. I thought of that story repeatedly over the next few years as the USA, which had long prided itself on being tough, stoic, and fair, became frightened, emotional, and paranoid.

The passing of the PATRIOT act was unreal. The ensuing curtailing of civil liberties was made worse by the general attitude of "if you don't go along with this, you're supporting 'them'". What little we do know of what the government and private industry have done is positively Orwellian and chilling.

Hearing government officials actually say "watch what you say" was creepy. Hearing them suggest people be rounded up pre-emptively or put into internment camps was infuriating. But watching the rest of the country go along with all of it (either reluctantly or worse, with chest-thumping vigor) was heartbreaking.

I didn't want to go to war. I don't know anyone who did. People marched in the streets, wrote angry letters. Blogged. Called. I became more politically active than I have ever been in my life. It didn't do any good. Our leaders threw us into not one, but two wars. Changing Presidents and parties hasn't helped. The wars continue. Gitmo is still open.

I could write extensively about the minor inconveniences and idiocies we've imposed upon ourselves in airports, but they're ultimately insignificant. They're annoying and ineffective, but the net result has been making sure I have an extra hour at the airport instead of an extra 15-30 minutes.

What I've really noticed at all those airports is the soldiers. They're everywhere I go. And so very many of them are kids. 18 year-olds. They're not in a fancy college. They're going to, or coming from, the countries we're occupying. They will probably endure longer service and more tours of duty than any prior generation of soldiers.

I look at these...children, and my heart breaks. I want to approach them and say many things. I want to thank them for their service, and apologize for not being able to prevent them from having to endure it.

In the past, the hardship of war was shared and helped create a bond and common cause. That's no longer true in the USA of the 21st century. The Selective Service System hasn't been used to draft people. The country has chosen to deploy the National Guard. Instead of sharing the burden, we've extended the obligations of our "volunteer army" while denying them equipment, decent care, and benefits.

In the 21st century, the press is locked down and co-opted. The news media barely even reports on the wars, and the public is barely interested. If I were a reporter covering the White House, I'd ask every damn day "when will the USA leave Iraq and/or Afghanistan?" Instead, the reporters ask dozens of questions about the President rescheduling a speech on jobs. Neither party will take a stand.

There's no "TV war", like Vietnam, on the news every night. It would hurt ratings. There's some great reporting going on outside of the evening news, but nobody's watching it. If it is put in front of you, it's so outrageous and sad, it's hard to not just shove it out of your mind. People compile their own news sources, and are able to choose those that reinforce, rather than challenge, their own assumptions and beliefs.

When knowledge, debate, and truth are no longer respected, learning anything becomes difficult. 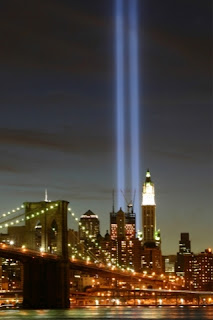 Conclusion
As a nation, we're still reeling. I hope we will continue to learn and grow, to respond with the things that make us good and strong, rather than reacting with fear and anger. Like Hadleyburg, our values and virtue have been tested. How will we answer?

Personally, my relationship with work changed. I have a better understanding of appropriate priorities now in both my day-to-day life and in a bigger picture. I am grateful to be alive.

I am also more cynical about and disappointed with our government. It's difficult for me to envision a future in which things get markedly better. The current state of the 2012 campaign does not leave me particularly optimistic.

As bad as I feel about government, my feelings toward the electorate are worse. We cheer governors who execute people, even innocent ones. We focus on trivial issues around our candidates rather than focusing on their ideas and plans. We don't hold our leaders, and by extension, ourselves, accountable for anything.

At these debates, these town halls, these meet-ups, why are we not asking "when will the wars end?" I guess we're all too worried about when we're going to get paid.

I'd like to end on a happy note, somehow. Wouldn't we all? I'm just at a loss. How do you hang a happy face on an ugly event that bred more ugliness?

I still love my country, and I'd rather be here than anywhere else. As I look back over the last 10 years, I wish we all had more to be proud of.

I think of my grandfather. He was at Pearl Harbor on a destroyer when the Japanese attacked. I wonder what he would say about all this.

I love what you wrote and that you are brave enough to write it.

As a Canadian, the tears I shed 10 years ago don't seem to be qualifications for honest discussions.

But the paragraph that really resonates:


I look at these...children, and my heart breaks. I want to approach them and say many things. I want to thank them for their service, and apologize for not being able to prevent them from having to endure it.


Soldiers from around the western world are losing lives and limbs in Afghanistan and nobody can explain why. It really is heartbreaking.