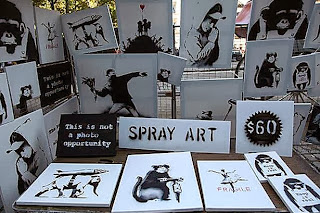 Apparently, famed graffiti artist Banksy set up a kiosk in Central Park where he was selling his artwork. He hardly sold any. One of my New York friends was walking in the park that day and is still kicking herself for not walking by and picking up one.

"Ha, ha", the stories bark, "aren't people stupid? Aren't you stupid? You could have had this great art for pennies, but you didn't bother looking!"

This is just like when Joshua Bell played a million-dollar violin in Union Station and nobody noticed.

Again, the story is framed as "Gosh, people are Philistines!" The Post article's title stops short of calling everyone "swine" for not noticing the beauty and wonder of the playing and the magnificence of music.

But anyone who attended an introductory class on modern art understands this situation.

This is an issue of "framing".

We have all been conditioned that most things people try to sell you are probably terrible. Capitalism starts giving you wedgies and smacking your face pretty early, yelling "Fooled you!" and running off with your cash. As Neil Young sang:

Saw it on the tube
Bought it on the phone
Now you're home alone
It's a piece of crap.

Live in any big city and you'll be quickly trained to ignore all of the noise around you and keep going. Most buskers are terrible. Most goods sold on the street are counterfeit, stolen, and/or low quality. Street art goes through fads, with everyone copying everyone (the latest, by the way, is painting on maps). Stopping to look or pay attention is just inviting tedious interaction.

The savvy, street-wise people never come bouncing in, smiling, saying "look what I bought on the street today!"

You literally "know better than to do that".

Further, the context most people are in when these stunts have been pulled is simply not conducive to art appreciation. When was the last time you arrived at Union Station (or any travel terminal) and said "well, I've got plenty of time to soak up the ambiance and appreciate the art here"? Most people are thinking "I am late, and I need to hustle to get where I'm going."

If you think that is unfortunate, it says more about the state of society and the pace of life than people's ability to appreciate beauty.

Context matters. And the context that museums, concert halls, and other "art environments" provide is some degree of cultural and social safety, a guarantee that "what is in here is 'real art', and what is not in here is not."

This is the same framing that the actual frame around the art and little title card provide, just on a larger scale. Both the frame and the museum tell you "the art starts here and stops there." Or in a concert hall, it's the curtains opening and closing.

When you go to one of these art boxes, you are dedicating time and putting yourself in a space to have an art experience.

When those art experiences are presented without the cultural and context cues, most people won't be able to parse them as art at all, and will instead assume they are commerce and/or a rip-off.

The Frame Makes The Art

The other important takeaway here: Framing is a more important element of "great art" than most people are willing to admit.

You can look at this the following way: Maybe there's not much difference between the pros and the hacks. This is the same thing that allows people to look at some great art and say "hell, my kid could have done that." (which, of course, misses several points, including "but they didn't" and "yes, but painting is about a lot more than the paint on the canvas")

Banksy's style has been copied and appropriated and duplicated. Banksy himself is likely to say (tongue in cheek) that you might as well buy "street art" from anyone. Is there that much of a difference between Banksy and not-famous graffiti artists other than name?

And maybe there just isn't that much difference between a virtuoso on a fancy instrument and the typical busker sawing away. At least not that most people can tell.

But, well, yeah, there is a difference. For one thing, they're not Banksy.


The frame - the "story" around the art object - helps you understand why it is or isn't art. Lots of people have written a lot about this, both simply (Brian Eno) and in much more obtuse fashion.

A recent study demonstrated people liked wine more if they had been told it was expensive. Exact same idea.

Really, everything we think of as "culture" is just a big frame or story around stuff that happened and got made: "This over here is good and noteworthy. This other stuff isn't."

And if you don't believe me, well, a bunch of famous people like Theodore Adorno and Malcom Gladwell and Brian Eno say so, so there!
at October 18, 2013

Email ThisBlogThis!Share to TwitterShare to FacebookShare to Pinterest
Labels: art