Napster, Oxycontin, and Ethics in Business

When Napster launched in June of 1999, it had a dramatic impact on the music business. Shawn Fanning, Napster's creator, wanted easy sharing of people's personal music files. He elided the difference between what had been the common, small-scale exchange of free (and technically, illegal) music via mixtapes or CD-Rs (painstakingly made by one individual for another, one copy at a time, in real time or close to it) and what Napster offered: industrial-scale, wholesale copying of entire libraries, effectively instantaneously, from one user to countless unnamed strangers.
By choice, ignorance, or both, Napster's creators simply and blatantly ignored laws and ethics. Napster rapidly grew from a few college dorm rooms to a worldwide phenomenon. Music business revenue took a nose-dive for years, and now, two decades later, has only begun its recovery. An entire generation of music fans grew up thinking music is, or should be, free and of terrible quality. The effects of Napster's initial disruption of the music business continue to this day, though the original Napster itself was an early casualty of the music wars, and the brand only survives as an ironic ghost of its former self, pasted over Rhapsody -- a service originally created to fight it.

Many people feel Napster's biggest innovation was its focus on digital files (and user-ripped and -hosted files, at that!). This familiarized millions of people with MP3s and the idea that music could be divorced from a physical format. Unfortunately, it also familiarized people with poor quality, no liner notes or metadata, and music as having no value, but that's not the point here.

However, Napster's real innovations had little to do with the music business. Napster was the first time I can recall a company and product being so transparently disingenuous and dishonest about its purpose.

Shawn Fanning was quick to call Napster a "file-sharing service", immediately and deliberately conflating the concepts of "sharing" a file on a network (which makes copies available to anyone) and "sharing" something like a sandwich. This framing had the effect of allowing bad faith arguments about "isn't sharing good?" (which, in its reference to guidance provided to unruly young children, provided an early inkling of how many tech companies would realize that infantilizing branding and messaging was a path to success) and smug follow-on discussions about "well, actually I'm doing artists and labels a huge favor by helping other people discover all these great artists and records!"

The people behind Napster knew what they were doing was illegal and unethical, and they did it anyway. And millions of people (including me) downloaded files, often because it was the only way to acquire some hard-to-find music.

Napster threw out the rules because it was easier than abiding by them. Rhapsody and subsequent services have had a much more difficult time, not just because they followed the rules or wrote new ones, but because Napster's actions caused so many bad feelings towards "tech".
I visited the illegal Napster during its heyday. It had a couple dozen young people jammed together at long tables in cramped rooms, like seamstresses in a sweatshop. Several had been dissuaded from attending college in favor of working for nearly no money at this hot new start-up. A major venture capital firm had invested a ton of money in this dorm-room project that was now a company clearly breaking the law as their primary business model.
I thought about all the people involved. Did they know what they were doing? Was it just about the money? Did they feel they were going to force some kind of positive change? And for whom? Who would choose to work there?
What would you have done?

There are many companies we could move to for the next connection or step. Uber or AirBnB, for example, who have tried to rapidly build businesses by ignoring regulations imposed on taxis and hotels, and have ended up stumbling into the kinds of problems that led to those industries being regulated in the first place.
These services (and their many copycats) try to keep a straight face while literally repeating Napster's "sharing" playbook and terminology, and by leveraging how people don't like paying for stuff, particularly in regulated environments, and finally a desperate and completely bogus "think of the poors we're helping survive" messaging around enabling families and workers at the margins to "make extra money", despite everyone involved knowing the vast majority of business and revenue are driven by pseudo-professional operations.
However disingenuous their messaging, these companies are continuing to face social, legal, and political backlash. As cynical and skeptical as I am of their approach, even I will acknowledge that, once appropriately regulated, they may have a place in society.
But Napster, and the "sharing companies", for all their damage, never destroyed anyone's lives at scale. You cannot say the same thing about Purdue Pharma, the Sackler family, and Oxycontin.
Oxycontin is a wonderful drug. It is a strong painkiller, and for people who have suffered serious and debilitating injuries -- life-threatening car accidents, cancer, and the like -- it can be part of healthy treatment and recovery. One of the minor tragedies of this whole scandal is that a useful and helpful medicine is now tainted and much more difficult to use for legitimate purposes.
Oxycontin is also incredibly addictive, as anyone who has had to take it for a while will attest.
2019 saw a good deal of solid news reporting about exactly how Purdue Pharma, under direct orders from its controlling founders, the Sackler family, aggressively pushed sales and distribution of Oxycontin. Read nearly any of the thoughtful, well-reported, long pieces about it and you will learn how easy it was to acquire and abuse, how inexpensive it is to manufacture, and how difficult it is for people to kick it.
You will also read about how the Sackler family, despite having made several fortunes from its success, wanted still more money. The Sackler family aggressively pushed Purdue Pharma to move more pills through the system. While their behavior is reprehensible, I want you to pay attention to the next link in the chain.
The Sacklers were directly benefitting from the massive success of Oxycontin. They made oceans of money, and would directly benefit from more sales. But the Sacklers themselves weren't the ones operating the business, manufacturing and shipping the drugs, pressuring the sales reps, hustling the doctors, looking the other way at pharmacies, and so on.
The Oxycontin epidemic was the result of a chain of thousands of workers choosing to do the wrong thing, day after day. That wrong thing could range from straight-up law-breaking to bending rules or ignoring process to simply looking the other way. Because that is what they were being instructed and paid to do. Or because it was easier than not doing it. Or because they didn't want to lose their jobs (perhaps for selfish reasons, like enjoying their lifestyles; perhaps for more critical reasons, like desperately needing health insurance).
Thousands of people have died or damaged their lives due to the over-prescription, abuse, and excessive availability of Oxycontin. The Sacklers bear responsibility. But so do all the other people at Purdue Pharma, the doctors, and the pharmacies who simply went along with it, even when they knew things were somewhere between "not right" and "very wrong".
How many of those people considered how their short-term actions would be potentially wrecking the lives of other people?  How few needed to stand up and say "stop", or just ask a few questions, to have an impact? As I read article after article about Purdue Pharma, one of the most disappointing observations was how few people even tried to stop it, and how many just went along with it, either out of their own small-scale greed or simply fear.
What would you have done?
Bad actors in business have been around as long as business has been around. But there is a difference between systems that enable single unethical individuals (look to Bernie Madoff or various other Wall Street bandits) and systems that rely on the unethical behavior of entire organizations and supply chains.

You Have A Choice

Most of us aren't captains of the ship or in command of vast resources. We are part of a larger organization. But as Mike Monteiro reminds us, "ethics cannot be a side hustle." By taking a paycheck, by showing up every day, we are complicit in what our companies are doing. If you are reading this blog, you have the luxury of choice to a degree much greater than most experience.
You can change your organization from within. You can ask tough questions. You can fight. And you can leave. In my career, I have done all of the above.

One of the more interesting and inspiring things I read this year was "Ruined By Design: How Designers Destroyed The World, and What They Can Do To Fix It", by Mike Monteiro. Mike is a designer, famous for his "Fuck You, Pay Me" speech, and for his strong opinions about good design and good designers. I have had the pleasure of making his acquaintance.
Monteiro's book is potent, if occasionally profane and digressive. But his main points are simple and clear, and can (and should) be extrapolated to workers beyond designers: Our work has impact beyond our immediate selves and our companies. We have an obligation to think about that impact, to act responsibly and ethically, and to do something about our work if it is not responsible and ethical. 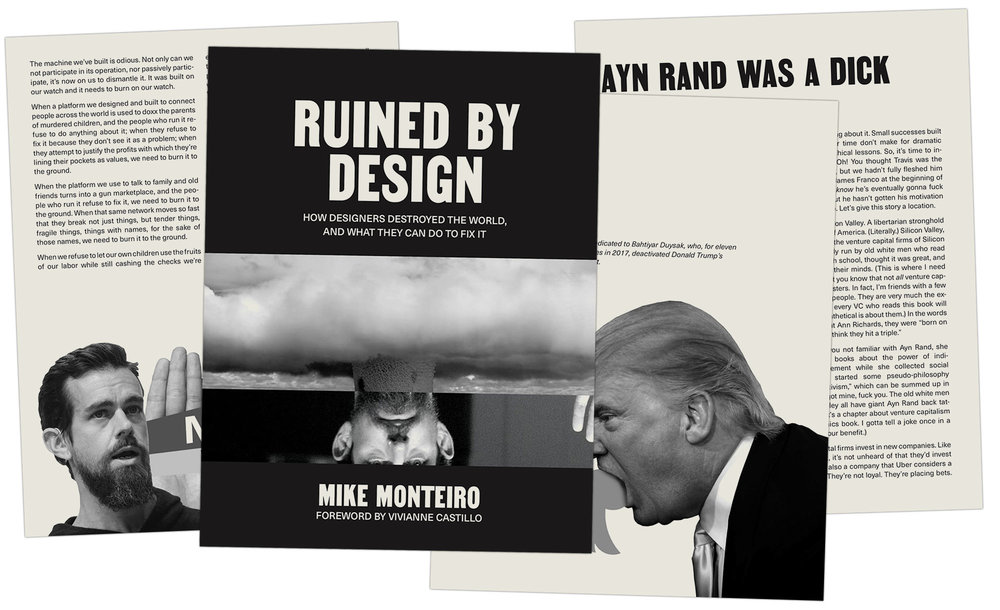 I strongly recommend it for any of you who work for a living. This becomes especially vivid against the backdrop of our current political and media climate. It seems far too many people have decided that doing harm or lying for a living is fine if the pay is good. I spent a good chunk of the last 12 months wrestling with these issues myself. My initial entry into the VR industry was driven by a desire to have a positive impact, and my subsequent job changes informed by that thinking.

I have spent years legally replacing every file I downloaded from file-sharing networks, either buying vinyl, CDs, or files as I can find them. I have purchased DVDs and Blu-Rays of movies and TV shows as they have become available. I have a short list of remaining purchases. I remain ready to offer my money to people when they make their content available.

Ironically, what's left of Rhapsody ended up buying the Napster brand a few years back, and replacing their own branding. So Napster "won".
The Sacklers threw Purdue Pharma into bankruptcy in late 2019, due to the impending lawsuits. Another example of how corporations allow people to reap positive returns for themselves and avoid negative repercussions. Reporters continue to uncover more about the history of their business dealings. One of the Sacklers died.
The Sackler family has proposed a multi-billion-dollar settlement, in exchange for preventing any other suits from going forward. That seems like a lot, until you realize the family themselves made $13 billion from their actions, so it's a trivial amount of money for them. Meanwhile, the money they'd surrender would be diffused over at least 30,000 people plus their attorneys.
at September 17, 2020