As I predicted many years ago, the tech titans are starting to roll up their various media services into cable TV-style bundles and push users into them.

Apple recently announced "Apple One", their first bundle. The only differences between Apple's subscription brochure and the cable companies' is that Apple's has slightly less terrible visual design and far fewer items on it: 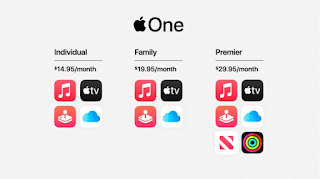 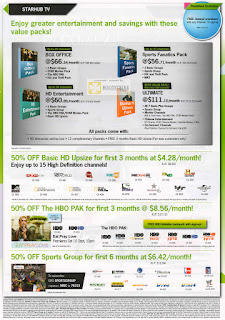 The Ars Technica article linked above correctly identifies all the key strategic elements: Apple's revenue from devices is waning, as they both hit saturation of markets and continue to produce less-than-revolutionary products. Service and subscription revenue is one way to offset that. Additionally, many of its services have not been particularly successful -- knowledgeable people inside and outside Apple have pointed out that, historically, Apple doesn't seem to understand or "get" services.

Music is considered an exception, but this is less about Apple's "brilliant" service (which is no different than any of the other services) and more about the fact that it is a music service, tightly integrated with Apple's devices. It has finally achieved decent numbers because it's Apple's music service, and people still like music.

Bundling is an easy way to generate revenue and drive overall numbers for its various services higher.

Amazon already has an annual subscription service -- Amazon Prime. For your money, Amazon gives you faster shipping, plus a video service, a music service, and some other stuff. It's been a money machine for Amazon since it launched.

Like cable TV, part of what makes these services work for businesses is they can lump in a whole bunch of inexpensive-to-produce things people probably wouldn't buy separately and make some money on the pile. Bundling also effectively allows companies to charge more money for the services people do actually want, and does this by throwing a bunch of things they probably don't want on the table, like an infomercial ("You get the knives, you get the scissors, and you get the plates!").

Podcasts aren't exactly revolutionary, but they are cheap to make, and cheap for content aggregators to add to bundles. In most cases, the podcasters themselves aren't getting paid anything (though I am sure there are exceptions, for the handful of top players), other than Amazon (or whoever) telling them "let us do this and you can reach a huge new audience!" For many podcasters, who generate revenue from advertising, a larger audience is all that matters (even if someone else is monetizing it and cutting them out of it).

So unlike music, where these companies are getting charged an arm and a leg, with podcasts, service companies scoop them up for free and are able to charge users a subscription fee for them. This is just like cable companies charging you for replicating over-the-air channels -- you could get this stuff for free, but isn't it just easier to have it on your cable box? Just pay for the free stuff! So you do.

At least in the short term, it will appear to be a good deal for the customers: "Well, I would pay $X anyhow for [music / faster shipping], so all the rest of that stuff for just a few bucks more seems like a great deal!"

But inevitably, over time, even more less-than-useful and less-than-amazing services will get added to these bundles and the price will go up. The price of the stand-alone services will also rise. Those increases will be used to offset the losses from decreased revenue coming from lower bundle rates, and will simultaneously encourage more users to get on the bundle.

The end state in a few years will be just like cable TV: the tech companies will hit the maximum amount of money people will tolerate in a monthly bill, with just enough "good stuff" against a pile of things they probably aren't using or aware of. Most people won't use most of what's in the bundle, but in aggregate, all of the services are probably getting used by someone.

One 21st century tweak to this model: the smarter companies will facilitate add-ons of popular services to their bundles. Just like you can sign up for HBO through your cable company, you'll soon be able to sign up for HBO through Amazon or Netflix through Apple (you can already do this for some services on some platforms! Feel free to swap out different services and platforms here).

The meaner companies will make going through their bundles the only way you can access those services on their platforms, and will effectively use services that aren't theirs (such as Netflix) to help lock you in to their bundles.

This isn't necessarily bad. Successful services can effectively subsidize less-successful ones (so video keeps books alive), and the constant revenue can help both services and content creators take some modest risks to develop new services and content. Depending on the deal structure, it might even mean some of these less-popular services actually get more revenue than they might otherwise. It will certainly offer more exposure.

Bundles represent a triumph of "good enough". "Good enough" is a hallmark of subscription services, particularly media-based ones. Most people don't want to watch a specific show or movie -- they want to "watch something". Big aggregated services are great at that, and when you lump a bunch of them together, you get that effect of "eh, it's good enough, I'll buy it" across the entire bundle.

I have tried most of the components in most media companies' bundles. They're...fine. Uninspired, but totally competent. Some have made marked improvements over the last several years, evolving from "embarrassingly poor" to "OK". Others have maintained their adequacy.

One can envision a world where the devices are more explicitly subsidized or "free" if you are willing to subscribe to particular packages, much in the way most people pay for their mobile phones as part of their service plans. Arguably Amazon already does this with its Fire tablets, which are dirt-cheap but basically designed as "buy stuff on Amazon" machines.