The Hope Image, Copyright, L.H.O.O.Q., and the Creation of Value 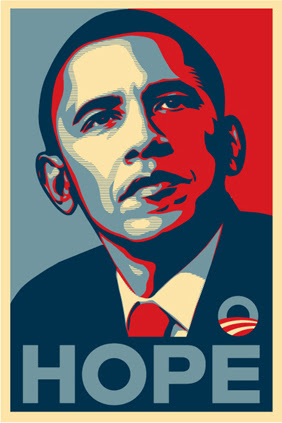 As many sources recently reported, the Associated Press is going to sue Shepard Fairey for his now-iconic "Hope" poster. The AP claims the poster is a copyright violation since it is derivative of a photograph taken by Manny Garcia and licensed to the AP.

Mr. Fairey admits he used the photograph as a "visual reference". The Hope poster has gone on to sell hundreds of thousands of copies. Mr. Fairey says he put most of the money he made from the posters into making more of the posters.

Whatever you may think, copyright law arguments are supposed to ignore whether the alleged violation "makes money" or not and focus on several other tests. It's not more or less of a violation if you make or don't make money from it.

There are several legal "tests" used to determine whether or not there's a violation:
AP is a company that licenses or buys lots of content from people. They dump the images in a database and don't count on making much from them in the aggregate. Every once in a while they luck into an iconic image and can make a little more.

In this case, AP is arguing something like this:
But if Mr. Fairey hadn't made the poster, nobody would care about another photo of Barack Obama. Mr. Fairey created new, substantial value for the photo by his creation of the new work and by his promotion and distribution of it.

Put another way, the poster is, to the average viewer, not a direct re-use of the original AP image. End of story.

AP will also have a hard time proving that he couldn't have created the poster without using their photo. The smart thing for Mr. Fairey to do (and what I suspect his attorneys will ask him to do in the future) would have been to say "I used many different images of Mr. Obama as part of my artistic process, but ultimately the work came from me and my impressions of Mr. Obama."

This article from SFGate notes that some people are saying "well, why didn't he just get a license from AP?" Without knowing the specifics of their licensing process, I'd start by saying "he shouldn't have to, because he's not duplicating or copying their image!"

Imposing a licensing option like this means AP effectively gets control over what Mr. Fairey or you or I or anyone else can do with these images. They can charge too much money. They can require ugly logos pasted everywhere. They can say "no". Think about Marcel Duchamp's "L.H.O.O.Q.", one of the best 20th century works. Duchamp created this work by taking a cheap postcard representing the Mona Lisa (so there's already a layer of abstraction) and then adding a moustache , Van Dyke, and the caption "L.H.O.O.Q." (if you say those letters in French, it sounds a lot like French slang for "she has a hot ass").

This piece was scandalous and controversial, as all of Duchamp's best work is. I think it also raises some great questions. Of course, it's knocking the old art world (which venerates the Mona Lisa). Beyond that, it's asking things like "how little does an artist have to do to create something new?"

L.H.O.O.Q. gets much of its effect from the viewer's familiarity with the Mona Lisa image. It's even more powerful if the viewer is someone with a deeper understanding of art history and the art world. But remember, this is built on a cheap postcard knock-off of the Mona Lisa, not the actual painting. Does that make it better or worse?

To me, it makes it even better, because it's starting from a debased and slightly off take on the Mona Lisa. Starting with a postcard also minimizes the "you're just copying" argument, because everybody is copying the Mona Lisa - it's not some lofty thing anymore, it's a poor copy on postcards, coffee mugs, t-shirts and so on.

The graffiti touches are clearly iconoclastic and, to me, hilarious. Much like the Groucho nose-and-glasses, I always find this sort of thing funny. Especially when doodled on Leonardo's masterpiece. Duchamp could have simply added the caption to a straight reproduction of the Mona Lisa. That would have been provocative. But it's the total combination that "works".

I think AP is going to lose the case, and I think AP should lose the case. Their arguments are weak, their motives disappointing (greed, nothing more, nothing less), and their desire to make culture richer is clearly low.

If, perchance, AP does win, will we ever see another Shepard Fairey or Marcel Duchamp or Andy Warhol or Robert Rauschenberg or Pablo Picasso or any other artists who, forget about collage, just look at pictures before they create? Or even actual things in real life?
at February 13, 2009