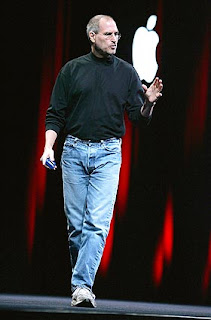 In the wake of Steve Jobs' resignation from Apple this past week, hagiographic posts churned and bubbled. One of the most popular was a story by Vic Gundotra, about how Jobs called him to discuss the Google logo on the iPhone, specifically the gradient in the yellow "o". It wasn't right, and he wanted it fixed.

People have been citing this as an example of how great Jobs was/is, noting his miraculous attention to detail.
I completely disagree. Jobs had many fine moments. This was not one of them.
This was a completely inconsequential detail. I doubt most people, seeing the two images side by side, could even tell the difference. And yet this top executive felt the need to spend time with another top executive to discuss and resolve the situation. On a Sunday morning.
Jobs has an army of some of the best visual design folks on the planet. They've not only gone to school for precisely this thing, they've executed design in the field. Google's design team isn't as good, but they're no slouches (and they're getting better).
Steve Jobs, on the other hand, is a guy who tucks his turtlenecks into his rather unflattering jeans, and wears running shoes with them (and not cool running shoes, either). His personal clothing aesthetic could perhaps be described as "successful sysadmin who once went shopping with a girlfriend".
So Jobs or professional designers: who's going to make the better design choice?
One makes many aesthetic decisions designing products or making art. Most of them are arbitrary, and collectively they create the overall feel of the thing. If you believe the reporting and hype, Apple's products are basically the result of Steve Jobs' personal aesthetic. There's nothing wrong with that.
Even if you think Jobs made the better choice and had the right to, imagine how his designers felt. Why are they even there? (And yes, I understand it's entirely possible one of them noted this issue and passed it up to The Steve so he could pass it over to Vic and get approval - you can't just arbitrarily change a logo asset for a company like Google, but I'm assuming the story went down as people are choosing to interpret it).
In the big picture, this detail was inconsequential. CEOs are supposed to stay focused on the big picture, and leave the details to the folks passionate and expert in implementing the details.
Far more important were the many other design decisions made - the size of the device, the weight, the screen resolution, how the system looks in general. Jobs (and more importantly, his toiling, faceless legions of workers) should be lauded for their attention to detail and understanding how important some of those things can be. If one has any doubts, go look at an Android phone or a (shudder) BlackBerry and see what lack of attention to detail looks like.
When you add someone to your band, you want them to bring their aesthetic and contribute. As I like to say, if I want you to play bass in my band, I want you to play what you think are good bass parts. If I'm standing in front of you constantly saying "no, not that note, play it exactly like this", I'm not looking for a collaborator. I'm looking for a robot (and should have a robot playing the part).

Looking at Jobs' take on this, he's got designers and he's not using them. He either hired the wrong people (they couldn't do the work to the level of satisfaction required) or he didn't empower them (he didn't let them do the work they were hired for). Neither of those speaks well of his decisions!
It's important to call out when design overrides are worthwhile or not. Looking back to this post, I'd cite Vic's story not as an example of Jobs' brilliance, but rather an example of how most CXO-level executives focus on the wrong things and take away the wrong lessons from Jobs' leadership.
Over the last few days, I expect many designers have received emails from their CEOs critiquing their visual design. Sorry to hear that, guys. Maybe you can call Vic Gundotra and get his advice on what to do.
at August 29, 2011

I agree with your take here, Anu.
One area of cognitive dissonance I've always experienced when thinking about Apple concerns how they keep their talent. Indeed, if I were a designer and had this sort of thing questioned regularly, I'd guess that I would feel completely disheartened and eventually take my skills and passion elsewhere. However, they *do* tend to churn out delightful products, year after year.

I've heard anecdotally that Apple is an awful place to work in terms of the culture, most citing nearly exactly what you have: that all important decisions are made by a very small cadre of insiders, with many seemingly inconsequential decisions made by Jobs himself.

One cannot doubt that they frequently create innovative products. But I have a hard time understanding how they nourish a culture of innovation given these sort of practices.

it sets the standard for what people inside the company should hold themselves too. it lets employees know that the little details do matter. i think this tale is a strong proof point that somewhat at the helm cares about the details. it doesn't mean he hired designers that couldn't do great work. it means that he did what he could to push the whole organization to levels of perfection. jobs obsessed over the innards of hardware looking beautiful too. i see nothing wrong with this. i can see how employees around the world read this and go "oh gee, my ceo is now going to be on my ass for tiny little things to emulate steve jobs." and i can see how this post is way to say that ceo's should perhaps 100% agree with the people under them to do their jobs. well, those people under the ceo, have people under them too and i would't expect them to agree with everything these people do either. i have friends who've worked at apple for 10+ years. their turnover rate is pretty low. not a horrible place to work and clearly not a place that fails at innovation as brad above states.

Hate to say it Anu, but I disagree. This is a really interesting issue that speaks to the Designer/Client (or in this case, CEO) relationship.

First, to clarify the events, because I think they've been confused a bit. I don't think this was a case of an Apple designer creating a Google Icon, and then Jobs going to Google and complaining about his own designer. Why would he do that? He would have just worked directly with his own designer.

It seems to me this was an asset that came from Google that looked funky. Either Jobs or a designer in Apple identified the problem. So Jobs contacted Google to help them find a solution, providing a designer.

Crucially, Jobs didn't prescribe the exact solution, he identified a problem. Jobs certainly could have prescribed a solution, because, in fact, he was a great designer, and understood everything required to design. But in this case, he actually did the right thing, and did nothing to run roughshod over his designers.

Is it the CEO's role to identify problems, and direct designers to work on them? Mos def.

I'm sure Jobs was insanely exacting, identifying problems like crazy. But for a designer, this shouldn't be disheartening, this is simply the process. An overly sensitive designer is a poor designer. Making the client or the leader feel like they can own the product and call it their own, and sell it to the world is really the core skill, not making stuff look good for them personally.

I'm sure Jobs had great trust and faith in his designers to find solutions to those millions of problems he would continually find, and we use the benefits of that relationship every day.

There's another issue that troubles me here too, and the music analogy you offer is a good place to start (not to be smug, but I'm a designer, and a musician). So yes, you wouldn't want a to play in a band where the bandleader is telling you what notes to play. But a better analogy is the role of the bandleader, the one with the vision. There are very few totally communal bands. For the most part the band leader shouldn't have to say much, but when they do, they offer direction, and identify when there's problems. "Something's out of tune", "Let's take this softly this time", "hey, the bass is too loud", "yo drummer, it's more of a latin thing…". Jobs wasn't telling Google what to play, he was telling them that their D string was out of tune, and they should do another take.


I've always taken issue that feedback on designs shouldn't come from anyone except designers. Everyone's a designer, in the sense that everyone has an intuitive reaction to visual design. I don't like the term "having a good eye" either. Everyone can see when there's a problem. The designer is the one finding the solution to the problem. So lots of people have a good eye, the designer needs a good hand, to find the best solution to the problem.


Lastly, what do his clothes have to do with it? The best mechanics always have cars that run terribly...

My point was that these tiny, insignificant details of the logo Google submitted should really be the purview of the designers at Apple, rather than The Steve.

As I noted in the blog, it's entirely possible that a designer noticed the "problem" and alerted Steve. Regardless, it doesn't seem like the level of problem that merits CEO-to-CEO communication. It's more designer-to-designer.

He DID prescribe a solution - he said Apple had created a version with a better gradient.

My larger point was this detail was insignificant. It really made no difference at all. I get that it's the CEO's prerogative, etc. but in this case I think it's more a case of obsession than "helpful".

I'm a musician and a designer, too. I've written about the merits of democracies versus dictatorships in bands. I do have some inconsistencies in my argument, and I appreciate you calling me out on them.

I think your characterization of "out of tune" versus "play THIS" is a good one.

My rather cheap shot about wardrobe was simply to contrast a few things: People talk about what an excellent, meticulous, obsessive, perfect designer Jobs was, and yet by most other people's standards, his own fashion choices were sorely lacking. I found that dichotomy worth highlighting.