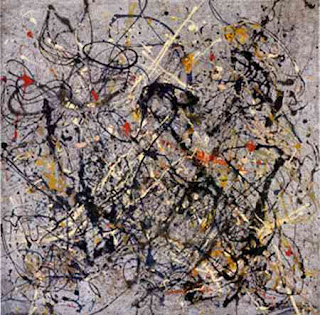 Since I'm writing a lot about being "gifted" lately, it seems fitting to comment on being "talented", another subject dear to me.

If you have ever made art outside of grade school, or if you've ever contemplating making any kind of art as an adult, you should read this article. It's about a woman and her relationship with playing guitar and music...and how everyone reacts to her artistry and efforts.

The gender issues addressed in the writing have captured most of the attention, but I think that's the least interesting thing about the piece. I was struck by her comments on making art independent of notions of "talent" and why you might choose to do it at all.

Learning to play an instrument - any instrument - is difficult. Gaining enough facility and comfort with the instrument to play songs harder still. I'm not even talking virtuosity or finding your own voice, just getting to a point where you can play. And unless you are very lucky, you're probably walking this particular road alone, with either modest encouragement ("sounds like real music!") from your friends and family, or something ranging from bemusement ("you're weird", "I thought that was for kids") or even active discouragement ("you're wasting your time", "you suck").

Getting good at music takes a long, long time. Like anything. There are plenty of people who quickly master emulation of their particular idiom (that kid sounds like an old bluesman! that lady sings jazz that sounds like that other lady that sang jazz!), but in some sense it's just a cargo cult. As I've noted before, moving beyond simple imitation or being a pastiche factory takes time, skill, and guts.

There's always going to be people "better" than you at whatever you do. You can either let that deter you and beat you down, or you can let it inspire you and give you some guidance. Most of the time, I've been able to focus on the latter. Sometimes, people are just so damn good I want to give up!

...only some would ultimately be deemed worthy to publicly perform music: those who were ‘musically talented’. And that talent was determined by one’s ability to imitate, precisely, music written by others.

John Philip Sousa called it. Since the invention of the recording machine, the culture of the amateur musician withered and was replaced with "professional executants" and a passive audience.

The re-democratization of production and distribution of music in the late 20th century began to reverse this trend. But it's still more common for people to say "I am not creative" and "I am not good at music".
Being "good" isn't the point. Having fun, or expressing yourself, or working your brain in different ways is the point. (And "good" is one of those ridiculous subjective judgments that falls apart under close examination.).
Recording also changed how musicians worked. Musicians could now study their own performances as well as others, playing and replaying. This led to a certain homogenization of sound in addition to the split between "performer" and "audience".
When you start making music, people will give you "complements" such as "Hey, that sounds like a real song!" What they're really saying is "you almost sound exactly like what I hear. Almost."
This is nothing new - art is culture, and people make their judgments based on what they know best. Presumably that gap between the familiar and you is a bad thing? It's not.
When I listen to the radio, I hear stuff that sounds like music but isn't music. I hear bands that have the superficial characteristics but no depth. The guitars buzz appropriately, the singer's nasal "punk" whine is a perfect distillation of Blink-182's distillation of Green Day's distillation of the Buzzcocks. The songs all go ABABCB and so forth. But there's nothing...exciting about any of it. It's simulated woodgrain veneer on top of particle board.
This is what happens when your primary criteria for merit is "resemblance to what came before": Stagnation. Let you be you.

I gave myself permission to ‘suck’. And with permission to suck comes the ability to rock, and to overcome all the fears and insecurities that had been holding me captive.

There are plenty of artists who have made "great art" while having either rudimentary skills or only using the very minimum of their substantial skill set.
And having objectively great skills is absolutely no guarantee of making good art. There are countless "guitar noodling" records, plenty of classical musicians who play like robots, and lots of technically competent, even excellent, painters who produce bland work.
Whether you're looking at Abstract Expressionism or listening to punk rock or electronica, the key is the ideas and passion matter more than execution. Execution is important only in that it not substantially detract from the ideas and passion.
And since much art benefits from limitations, if I have to choose between lack of "talent" and lack of "ideas", here's my "talent". Keep it! You'll always benefit from better technique, however. Never mistake lack of skill for "authenticity". It's just lack of skill!

You will be clumsy when you first start your art. Try to think of this less as "I am awful" and more as "I am expressing myself". Do it for yourself!
at August 15, 2011

Thanks Anu! Nice choice of the Jackson Pollock piece there. I strongly believe in art as a spiritual discipline and that everyone should have an art practice. I recently discovered 'visual journaling' and that is incredibly promising and satisfying. It is not about the outcome.

I'm late to the conversation, obviously. But also ironically. Because _time_ is what I want to throw into the mix.

I discovered that what I love most about doing art badly (for me it's sketching and painting) is that time stops while I'm doing it. When I unplug ambition--I'm bad at this; no one is going to see it--when I unplug social need--this is not going to help solve that big problem in my community; it's not supposed to--THEN all that hurry up, time's passing, get a move on stuff falls away.

And I find inspiration, recharging, all those other things you're discussing. Therefore, I'd add in that I don't EVER want to do it well. I ALWAYS want to do art badly. And you'd be hard pressed to find anything else in my life for which I can honestly say that.

I suppose that begs a question: should I figure out other things to do poorly? Should we all?
(just one more TIPster's thoughts...)