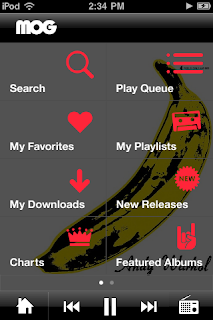 The MOG app I designed and manage was recently chosen by TIME magazine as one of the "50 Best Apps of 2011". This puts my work on the same list as Brian Eno's!

Coincidentally, MOG just released a very nice update to the App which went live on Monday.

The TIME magazine citation joins the Billboard "Best Streaming App" award MOG won in 2010. It is quite satisfying to be recognized (albeit abstractly), especially considering some of my history in the business.

Credit is due to the fantastic developers, visual designers, and quality assurance people at MOG. As one of my friends said, I have the easy part: the "dreaming-up" job. They're the ones who actually make it all happen.

MOG has many more great things to add, and some exciting plans for the rest of the year. If you like music, it's worth checking out. Available for iPhone and Android.
at February 02, 2011