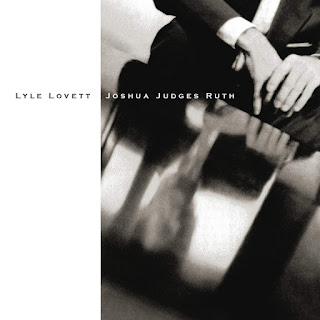 I am not entirely sure how I got this record. I am pretty sure I picked it up while I was working at The Record Plant -- I recall a pile of them being around. My CD has a hole drilled through the case and booklet, which indicates it was a promotional copy.

Back in the 1990s, when I was a music professional, I was constantly receiving free CDs. Because I was young and poor, always interested in hearing something new,  and music used to be valuable, I took it home to listen.


I didn't know anything about Lyle Lovett, other than he was a "country singer", with a reputation for being quirky. I suppose I was expecting something goofy and/or lame, a jokey, hokey borefest.

Instead, I heard a beautiful and surprising record. The production and recording are pristine, clear, and minimal (probably why it was lying around the recording studio). For a guy who used to advertise his "Large Band", Lovett's recordings on this record are sparse, and filled with top-shelf session players.

The songs are understated and full of feeling. I was particularly struck by the slower tunes on the record. "North Dakota", "She's Already Made Up Her Mind", "Baltimore", and "Family Reserve" blew me away.

"North Dakota" is perhaps the best on the record. The shards of piano, Rickie Lee Jones singing. The wide open space. The heartbreaking lyrics.


I suppose it is country -- that's the genre you'll find Lovett filed under. He sings with a mild drawl, his writing has some "country" tropes, and his instrumentation (acoustic and electric guitar, piano, bass, drums) and note choice move him into that territory. But a few tweaks and he could be a folk artist. It's certainly not Toby Keith or whatever your avatar of Stetson-hatted, boot-wearin', ass-kickin', y'all-hollerin' "country" is.

This album reminded me that great art comes in all genres, and that we often benefit from approaching art with no expectations and an open mind and heart.

I haven't really liked any of his other records that I heard, but I still love this one.
at April 09, 2020