Albums of Influence: Spirit of Eden by Talk Talk

Some records define their own genres. So it is with Talk Talk's apex, "Spirit of Eden". 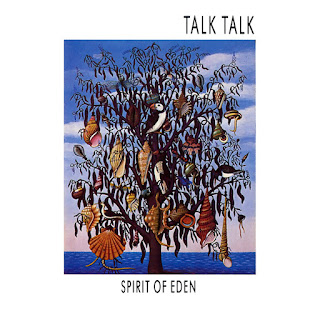 Mark Hollis, already a veteran musician by his late teens, formed Talk Talk in the UK in 1981. The band was quickly picked up for various deals before ending up with a recording contract with EMI. EMI had just broken through with Duran Duran, and with Talk Talk, saw similar prospects for new wave gold.

Talk Talk's first album was straight-up new romantic / new wave pop. It was produced by Colin Thurston, notable not only for engineering Bowie's "Heroes", but for having just produced the fantastic debut album of Duran Duran.

One can hear a sonic connection between that first Duran Duran record and Talk Talk's first album, "The Party's Over" (1982). Both records are full of Simmons electronic drums, chorused bass guitar (fretless on Talk Talk's record!), and plenty of keyboards, the albums give plenty of room for their distinctive vocalists to shine, and the production highlights the strengths of the songwriting. Talk Talk would even support Duran Duran on tour in 1982.

And Talk Talk's pop songs were quite good. While the band didn't particularly like that first record, I love it. I saw the video for the song "Talk Talk" on Rock N America, a small, late-night syndicated video show, and was immediately interested. I ended up buying a vinyl copy of the album and devoured the songs. I taught myself fretless bass by learning to play all the bass parts on that record.

Talk Talk's next two albums ("It's My Life", 1984 and "The Colour of Spring", 1986) were increasingly elaborate productions. Still very much pop / new wave, the sonic palette broadened on each record. They continued to write great songs, albeit with less consistency and less pop rigor. At the time, I found the lack of wall-to-wall pop songs disappointing.

But "The Colour of Spring" held my attention in other ways. In particular, there was "April 5th", a moody, piano-driven track that drifts off into strange clouds of sound. I played it over and over.

And then, in 1988, as I worked at WDCR, we got a pile of promotional copies of the new Talk Talk album, titled "Spirit of Eden". The mostly white album cover focused the band's typical surreal artwork (every single one of the band's album covers and singles contained artwork by James Marsh) and suggested something naturalistic.

I put the record on, and was blown away.

I can still remember the smell of the air, the sounds of the leaves blowing outside, how I felt, as the first notes of the album started. This wasn't a new wave pop album. It wasn't even "rock". I didn't know what it was. It was...music. Woodwinds and trumpet. Wailing harmonica. Yes, some electric and acoustic guitars and drums, but fitting with this larger band.

There were 6 songs, which had some kind of structure, but it wasn't chunks of 16 bars. It almost felt improvised. It was dynamic, ranging from barely audible to crashing volume (increasingly rare in pop music). And it was largely rubato, freed from a click, pulse, drum machine, or steady beat.

While it was unusual, it wasn't difficult to listen to, or abrasive, or noisy for noise's sake. It was composed, in every sense. Emotional, contemplative, and alive.

6 pieces. Just under 41 minutes. It finished. I wasn't even sure how to respond. Did I like it? I played it again. By the time it ended, I knew it was a masterpiece.

Nearly every musician I have met (and I know a lot!) agree with me. You will find this album on countless musician's lists of most influential, important, desert island, etc.

There's plenty to be read these days about the unique way the album was made, or what a commercial failure it was (supposedly the record executive cried when he heard the record, because he knew it was brilliant but he also knew it wouldn't sell), or how difficult Mark Hollis had become by this time.

But for a long time, the record just existed as a statement of what was possible. Here's this great art for you, world.

I just listened to the album again as I wrote this. There's still nothing like it, except the next, final record Talk Talk would do -- "Laughing Stock", which is every bit as good as "Spirit of Eden", and the single brilliant Mark Hollis solo album (which was originally intended as a Talk Talk record).

Hollis retired from the music business after his solo album was released in 1998, and he died in 2019 at the age of 64.

Another band and artist that moved from pop towards something unique, making undefinable music for a machine that largely had no idea what to do with it. Talk Talk showed me your best work comes from doing what you want. It probably won't make you a ton of money, but it will make you great art.

If you have never heard "Spirit of Eden, do yourself a favor. Find 45 minutes where you can give it your attention. Put some headphones on or sit in front of your stereo and listen to it, all the way through. Don't use YouTube, try to find a source with decent fidelity.

Talk Talk was also a great band prior to "Spirit of Eden". With hindsight, one can clearly hear them heading towards that record: