"The weed of crime bears bitter fruit! Crime does not pay. The Shadow knows!" 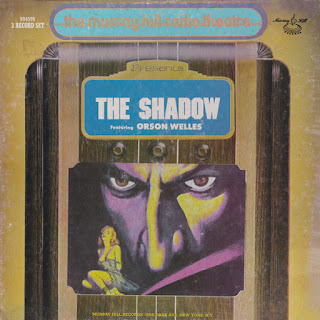 In 1976, Murray Hill records released a series of three-album boxed sets documenting classic radio programs. My Dad brought two home for me. "The Green Hornet" and "The Shadow", which was voiced by Orson Welles.

It was my first record.

I was quite young, and this was before VCRs, cable TV, video games, and the internet. I loved records. The technology itself was magical. And "The Shadow" let me experience movies for my mind, and I could play them any time I wanted.

The original recordings were relatively low fidelity, but fine for playback on a kid's record player. I must have played those 3 discs -- 1 episode per side -- a hundred times.

The original shows were broadcast in 1938. Back then, The Shadow was the equivalent of today's Marvel superheroes, and had been adapted from pulp books to several radio reboots. Orson Welles was 22 when he voiced Lamont Cranston, before moving on to bigger and better things. These recordings include the original in-broadcast commercials, which are historical artifacts in and of themselves. As are the voices, accents, and dialogue, capturing an America that now only lives in black-and-white movies and scratchy recordings.

It didn't seem too corny to me. Even back then, I could appreciate the patina of history on these short, simple radio dramas.

If nothing else, "The Shadow" taught me how entertaining and fascinating records and recording technology can be. It also taught me that records can tell a story, and should be worthy of being replayed. If my records have concepts, themes, and sound effects, well, perhaps this is why.

I still have these records, which are the only things that remain from my childhood.

[This concludes the 2020 "Albums of Influence" series. Thanks to Adam Tober and Paul Zyla for asking me, and thank you all for reading.]