Albums of Influence: 1999 by Prince

It is not surprising that many of the albums I find influential date back to my teenage years. I've written before about how those fresh ears and feelings make everything feel more powerful. I consider myself fortunate that some of the albums that landed in that fertile environment were so good. And few albums are as perfect for a teenager to get lost in as Prince's masterpiece "1999". 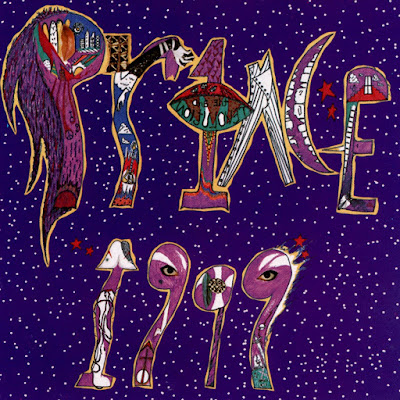 Released in 1982 (I was in 8th grade), I first knew it through the heavily-played radio singles -- the anthemic title track and the sly, sexy "Little Red Corvette".

"Little Red Corvette" is an unusual and beautiful song. Rather than kicking off quickly and strong, as most pop songs do, it slides in, gliding on those slinky OB-8 synthesizer chords and that understated Linn beat. The song builds slowly, releasing into the chorus. As far as I was concerned, it had everything: synthesizers, electronic drums, guitar, and suggestive and naughty lyrics. And it was catchy.

"1999" was a slightly more traditional single, but still weird. You don't normally hear vocals trading off the way Prince does it. Full of quotable lyrics, and again, instantly memorable.

Both of the videos got into rotation on MTV and other outlets. They aren't exactly high-budget, and are straightforward performance videos. But that only serves to emphasize how amazing Prince and The Revolution look. They remind me of Buckaroo Banzai's Hong Kong Cavaliers. One guy is wearing scrubs. The guitar player is about as new wave as it gets, with Japanese headband and angular shirt. They have synchronized dancing. Full-on show-biz. The band is multi-racial and includes women. The band exudes sex, and in a somewhat dirty way, too.

Based on the strength of those 2 tracks, and a few others I had heard on mix tapes, I bought "1999". I got a lot more than I bargained for.

"1999" is a big record in every way. It's a double album, for starters. The songs are long, with most clocking in around 6 minutes. The shortest is 4 minutes and the longest at 9:28. It almost feels like Prince decided to release the 12-inch mixes of all the songs, rather than tight edits. He gives them room to stretch and digress.

Reflecting the collage on the cover, it feels like Prince laying out his manifesto and agenda. Prince has literally cut up his previous albums and used those elements to build his new record. Look closely and you'll see the eyes and button from the "Controversy" cover, and some black-and-white stuff snipped from "Dirty Mind". There are cryptic symbols and vaguely religious drawings. It's also remarkable the cover wasn't censored, as the "1" in "1999" is clearly a penis.

Thematically, the album covers a lot of ground, too. There are very few ideas in Prince's catalog that don't show up here, and some show up here first. "1999" is an anti-nuke/anti-war song. The beautiful "Free" seems to be a song of gratitude decades before "gratitude culture". There's a whole spectrum of relationship songs, covering infatuation, seduction, heartbreak, and loneliness.

And, because it is a Prince record, it is also strange and weird. And sexy in a dark, slightly dangerous (or at least non-normative) way. Prince's devotion on the Numan-ish "Automatic" is so intense that he has lost his own will. He'll "rub your back FOREVER" and he'll "go down on U all night long", and when he sings it, you feel his desire.

But you also feel his heartbreak. I played "Something In The Water (Does Not Compute)" over and over, nodding my head as Prince laments:


The song is driven by a restless, echoing drum machine and punctuated by self-consciously sci-fi synths, which burble and flow. Prince's vocal builds intensity throughout, starting out conversational, growing pleading, accusing, until finally he is wailing with all the pent-up frustration so familiar to teenagers everywhere. And because it's Prince, it also does some musically interesting things as well.

The ending suite of "Lady Cab Driver" and "All The Critics Love U in New York" are also strange and fantastic. Both songs have unusual vibes. The former has a delicate vocal over a groovy human drumbeat, and seems like a straightforward confessional come-on song...until the shocking bridge where creaking bedsprings provide the background for simulated sex while Prince enumerates a number of injustices ranging from why he wasn't born like his brother (handsome and tall) to "the rich" (not all of them, just the greedy, the ones that don't know how to give, to (bizarrely) Yosemite Sam, and the tourists at Disneyland. You've never heard anything like it, and he sells it.

"All The Critics Love U" is an effortless doodle that is still more compelling than most tracks on other hit records. Prince sounds like he's having fun, and it's hard not to have fun with him, as he flips around through attitudes and couplets that describe how "you don't have to keep the beat, they'll still think it's neat...in New York."

But for me the centerpiece and highlight of the record (if not Prince's entire career) is "D.M.S.R.", a menacing dance track. The groove is powerful, and the lyrics are full of a strutting confidence every teenager covets. Prince sings with some edge to his voice, which darkens the already verge-of-danger lyrics. The song feels like a party about to spiral out of control and turn into a street riot, a vibe reinforced by the strange ending where a woman is pleading for someone to call the police and to help her. It's like a teen movie directed by David Lynch.

Throughout, "1999" does not disappoint. It surprises and entertains, and if the worst thing you can say about it is that "Delirious" might be a bit long (at over 9 minutes), well, fine. It's still memorable.

I spent many a night with headphones on, listening to this album, and still know it better than most of the albums I own. Aside from the great music, there was what the album represented to me: another element of that just-around-the-corner new wave utopia. Here comes a black guy playing rock music that redefines genres. He's got this killer diverse band. He's against all the right things and for all the right things. But instead of the 60s-hippie "let's all love each other", he stares right at you and says "let's all fuck."

How could that dream not resonate with a teenager?

Perhaps those "adult" themes didn't consciously influence me, but I have to believe they had at least a subconscious effect on my own worldview. A different kind of influence, and a record that "changed my life".

Prince did the record almost completely himself -- his band is credited only with backing vocals and a guitar solo. And yet, for such a controlled solo record, it feels remarkably loose and improvised. But the fact this was a one-person project was not lost on me, and yet, he also had this great live band -- a template that (somewhat unwittingly) I would replicate in my own life.

The modernism of the record -- its matter-of-fact adoption and integration of current technologies -- also seemed ahead of its time. Prince wasn't using new sounds as a gimmick, he made it his palette and his clay. That also registered. You could make music with synthesizers and drum machines that wasn't Kraftwerky or self-consciously "space music". It could be sexy and dangerous.

Prince's inclusionary attitude must again be mentioned. Despite this really being a solo album, one of the inner sleeves featured a photo of him in front of his band. You see more than one race, more than one gender. Not presented in a schoolhouse-special-corny-moralizing way. Again, very matter-of-fact. This is The Revolution (in every sense). They look bad-ass. Too few bands and artists neglected to copy or pick up on this aspect of Prince's work.

Prince was a once-in-a-lifetime genius. He would go on to record more successful albums. While "1999" was the 5th best-selling album of the year, his next record would be the chart-dominating "Purple Rain". Prince would make better-sounding records."1999" is kinda murky and demo-ey, which isn't necessarily bad...it fits with the kind of grimy proto-indie thing he was doing, but doesn't quite do his talent justice. Prince would make weirder records and more sprawling records, most notably "Sign O' The Times". He had made rawer records ("Dirty Mind"). And, sadly, he would make some very bad albums (let's not name names).