I have written about a number of musicians throughout this series, many of whom I would say transcend the idea of being a mere "musician" and rise to the level of "artist". However, of all the influential albums I can think of, of all the influential people, there are very few "artists" in the classic sense. And of all of those, at the top of the list is Laurie Anderson. 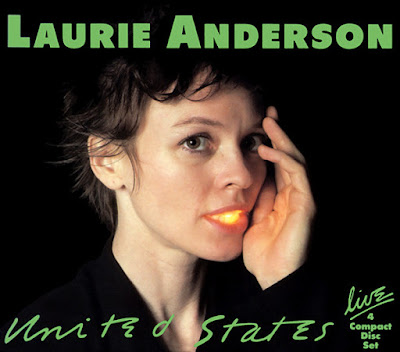 I had become aware of Laurie Anderson due to the freak success of her early 80s work, particularly "O Superman" and "Big Science", which ended up on some mixtapes Tim Reynolds made for me (and which were arguably the most "influential" records ever for me). I was intrigued, and when a girl I was after expressed some interest in her, I investigated further.

Laurie Anderson is relatively well-known, and is the rare "avant-garde" artist who has achieved some measure of commercial success. She is a classically-trained and talented violinist, and has several art degrees.

Anderson has always been interested in creating new instruments, or new ways of working with her existing instruments. In pre-MIDI and pre-digital sampler days, she created a "tape bow" violin, where the bow consisted of a piece of magnetic tape and, in place of strings, the violin body had a tape bow mounted. In this way, Anderson could "perform" a sample, moving it back and forth at whatever speed she wanted.

Another innovation involved contact microphones. Anderson would play violin in a door frame, and as the bow knocked against the sides of the door frame, the sounds of the knocking would be amplified and incorporated. She also did a piece where she put a contact microphone on her skull, and knocked on her head, amplifying the resonant sounds that result.

Anderson is less a musician than an artist, and her performances have always incorporated thoughtful and important visual elements (words and/or imagery) which are as essential as the music. One of her early art pieces involved her playing violin while strapped into ice skates frozen into a large block of ice. The ice would melt, and she would walk away.

Or this piece, where she built drum machine triggers into a suit, so she could perform thusly:

Anderson was not afraid of technology, and was the sort of artist who seemed to refuse to use it the way it was intended, always looking for the dangerous territory on the edge of acceptable use.

Famously, Anderson adopted the Eventide Harmonizer, using it to transform her voice in real time. Frequently she used this to take her soft, delicate voice and change it into a parody of masculinity and authority.


I found her records were fascinating. There were a few "songs", with had refrains (if not choruses), and hooks of a sort, but which seemed to meander and take their time, acting as vehicles and backgrounds for her elliptical, thought-provoking lyrics. Reading them on a page, it is easy to dismiss them as a kind of pseudo-profundity or stoner-ish observations. But in context, I found them gripping.

Aside from the songs, her records had other pieces that seemed less like songs and more like something between spoken word, comedy, and (slam) poetry. I came for the synthesizers, I stayed for the sheer inventiveness. Who had thought you could make music and records like this?

In 1984, Anderson released "United States Live", a 5-album(!) boxed set documenting two nights of 8-hour performances (minus some purely visual material) she'd given in New York in 1983. By then, she had released two full studio albums, her debut "Big Science" and the lush follow-up "Mister Heartbreak".

Beyond concept albums, "United States Live" suggested that each of her records was part of a larger whole. The album itself was filled with artwork strewn among the credits. Like her other work, it was by turns strange, beautiful, funny, and disturbing.

I bought the vinyl version of the album, and spent many a night in my room, playing side after side. My friends would come over, we'd turn out the lights, and just listen. I thought a lot about what she was doing. How she was thinking about a total artistic work: sound, imagery, performance. How she could take you from laughing to uncertain about how to respond to thinking and feeling. It was like being hypnotized, or listening to a spell being cast.

As I played this record over and over, I thought about what I could do to achieve similar effects. In hindsight, she is one of the most influential artists I have heard, particularly from my formative years. The notion of an intersection between commercial pop and the avant-garde can be traced 100% back to Laurie Anderson. The integration of technology and looking for new possibilities. The careful consideration of visual presentation as part of the audio experience. It is no surprise I wanted to study all of that when I went to college.

Given her visual bent, astoundingly, there is no accompanying video at all for "United States Live". Apparently the audio is the only document of her incredible shows. This doesn't seem to be unusual, unfortunately. Despite her relative importance, the only real "concert film" she's made is 1986's "Home of The Brave". Perhaps she feels the "magic" cannot be adequately captured, and that the viewer must be at the live show, in much the same way photos of artworks are not nearly as powerful as a visit to the gallery.

I saw Anderson perform as often as I could up until the late 90s. She has continued to release the occasional album. She took singing lessons and became a "better" singer. She became more musically elaborate (and, perhaps sadly, conventional), and has worked with Peter Gabriel, Brian Eno, and her late husband Lou Reed, among others. While I always listen to her records, I found them less compelling as she evolved.

In some ways, she was too far ahead of her time. She seems made for the current moment, with her unusual approach to gender. She's female, and has made several records and works focused on the female experience, but has never been conventionally "sexy". Her videos are as important (or more so) as the stand-alone music: Made for YouTube. Her content is not just meme-able, but practically memes in and of itself, complete with strange imagery and clever and thought-provoking wordplay. Her elaborate stage shows are somewhere between performance art, rock concert, and Vegas spectacle. She's more than a little wary of our rapidly changing society and the role technology plays.

I am listening to "United States Live" as I write this, and it still sounds like she's talking about not just the present, but the imminent future.