If Rio is one of the quintessential 80s albums that both defines and transcends its era, Endtroducing..... does the same thing with the 90s. 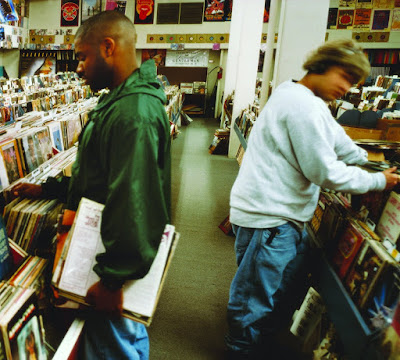 For me, this record touches on all of the big developments from the 90s: there's electronica (remember how big that was going to be?), there's hip-hop, there's "downtempo" (albeit without the requisite breathy female vocals). And there's not a trace of "rock" on it in the conventional sense (though there are a ton of classic rock records sampled on it). There are plenty of records I could cite for this list that fit into all of those slots, but few that seem to rise above the conventions of the time.

The entire record was made D.I.Y. style by one young man using an MPC, a turntable, and an ADAT digital multitrack. Minimal equipment, no studio. A record made up of shards of other records, ranging from incredibly obscure to Bjork to Tangerine Dream. 20 years later, I am still recognizing new sources for samples.

This record has great compositions and a perfect late-night vibe. It crackles with a youthful energy. Nothing else really sounded like it at the time. DJ Shadow had been working towards this sound, but his early singles only suggest the mastery and vinyl alchemy on display here.

I was hooked the minute I first heard it, from MP3s downloaded over the internet (again, the 90s!) before eventually purchasing it on CD.

I wasn't the only one, and this record's importance has been cemented both by critics and by other musicians, who have made entire careers emulating aspects of this record's sound and vibe, or spinning variations on its themes.

This is another record I still listen to regularly. It still sounds timeless. Unfortunately, DJ Shadow never did anything remotely this great again.

[Updated] I neglected to mention exactly how this record influenced me. For one thing, it reminded me that one could make engaging and emotional music with beats and without vocals. It reinforced that you don't need gear or a great drum sound or big studio. You just needed a vision, work ethic, and some talent. Nothing was stopping you. It showed that truly clever and creative use of samples was possible and commercially viable. It also confirmed that "rock", if not dead, was at least no longer king of the hill, and that post-rock genres like electronic and hip-hop increasingly felt like they spoke to the current moment, and probably the future.
at May 15, 2018