I was always aware that David Bowie existed, but I started paying attention to his music when "Let's Dance" was released and began its chart domination. Combined with his guest spot on Giorgio Moroder's "Cat People" soundtrack, I wanted to hear more and learn more, and began moving back through Bowie's discography, starting with a low-budget RCA compilation of songs from his various albums called "Fame and Fashion" (get it?). 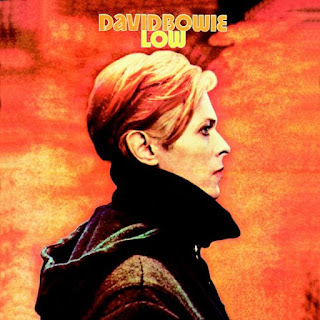 One of the Bowie albums not covered by that release was "Low", and as I began to learn more about Brian Eno and explore his discography, and read more from musicians and critics, "Low" kept reappearing as an album of significance. So I picked it up on vinyl during my junior or senior year of high school, and began listening to it constantly.

The album was immediately intriguing and surprising. Starting with a synthesizer effect fading into a sax-driven instrumental which feels like it fades out early, and then dropping into the bizarre pop of "Breaking Glass", you hardly have time to catch your breath as the album takes off.

The album features a palette that sounds different from most rock records of its time (1977), including electronic string ensembles and synthesizers (often used for unusual sounds) complimenting Bowie's usual drums, bass, saxophone, and crazy guitar players.

The album (and this is very much a vinyl album) has 2 sides with different personalities. The first side is (mostly) pop songs. But these aren't quite normal, usual pop songs. They are all slightly wrong or different. They all feel fragmentary and short, fading in or fading out, and all clocking in under 3:30. The lyrics are also mysterious and suggestive, feeling incomplete and fragmentary as well.

Side one is bookended by instrumentals, albeit pieces which are still grounded in conventional rock rhythm and structure, though the synthesizer work adds unique character.

Side two is practically ambient music, or Bowie (and Eno's) take on the same thing. There has been speculation about how much Bowie actually contributed to these compositions (indeed, all of the "Berlin Trilogy" is subject to a lot of "well, who really did that?" kind of debate), but to my ears, these are not pieces Eno would have created on his own.

The four instrumentals that comprise side two all have different moods and some different timbral elements, but to me they have always felt like four pieces of a greater whole. There's something shocking about Bowie -- first and foremost, a singer -- refusing to sing on half of a record (well, there are some vocals, but they're buried in the mix and not exactly sing-along material). This second side largely abandons normal rock structures. The pieces all have a clock driving them, sometimes slow drums or a pulse, but they feel ambient, floating. They do not really have the block-like sections that mark verses and choruses or "A" theme and "B" theme that make up most songs.

And unlike the fragments of side 1, these pieces take their time to unfold, and feel complete.

The overall effect is remarkable -- in the space of less than 40 minutes, Bowie's work shows what feels like a complete universe of musical possibilities that he has only begun to explore (further validated by the fact that his next album "Heroes" closely follows the "Low" template). It sounds worlds away from anything Bowie had done before, and as is often the case, not much like anything anyone else was doing at the time.

Because there are so many ideas thrown out so quickly, it is not surprising that many musicians find something to love on this record.

"Low" is another album I still listen to frequently. The pop songs are so short you barely have time to register whether you like them or not before they're fading out. The ambient pieces are a little more ponderous and too intense to fit as good background music, but I occasionally get the urge to hear them and give them the attention they deserve.

This album helped me understand that the less explicit and formulaic you were, the more interesting you could be. Bowie says so much by not saying much that we can understand on this record. It feels like being lost in Tokyo, where you know there is a meaning to all the language around you, but you just cannot quite decode it. And yet, for all of the obliqueness and strangeness of these songs, they are still ridiculously catchy.

It also reinforced that my favorite records were musical experiences, not just "a bunch of songs". Bowie's lack of singing throughout makes the times that he does open his mouth more significant, and help underscore that he is an artist and a musician, not just a "rock singer".

Finally, both the songs and album overall suggested that not every artistic idea should be "fully developed" or "balanced", and that asymmetry, suggestion, and unusual proportion were powerful tools.

Many retrospectives have argued that the album's imbalanced and fragmentary nature was less intentional and more the result of running out of time, money, ideas, and/or confidence. It doesn't matter to me, and doesn't change how the album hits you. Sometimes the artistry comes from looking at what you have (in whatever unfinished, broken, or imperfect state it might be in) and saying "Wait, this is pretty close to amazing. It doesn't need much else."

Bowie would go on to make several more very interesting records ("Heroes", which is basically Low II, and the underrated "Lodger") before his astounding and brilliant "Scary Monsters" leading into his commercial period and later artiness. I love all of Bowie's records for various reasons (including most that people hate), but not uncritically. "Low" was the album that made me begin to understand how great he really was.