In 1991, I was working as a secretary in a small office in Beverly Hills by day, and at night, rehearsing and writing songs with my band.

The job was easy, and I had a lot of time on my hands. I spent a lot of it trying to fill in what I felt were gaps in my musical education. I read a lot of books, and spent my money on what seemed to be important records that I hadn't heard.

I didn't have a lot of money, and records were expensive. I kept a list of what I thought I needed to hear and worked my way through it. At some point in the year, I received an unexpected bonus of something like $50. I headed for Tower Records on Sunset Boulevard.

I was going to buy "Nebraska" by Bruce Springsteen. 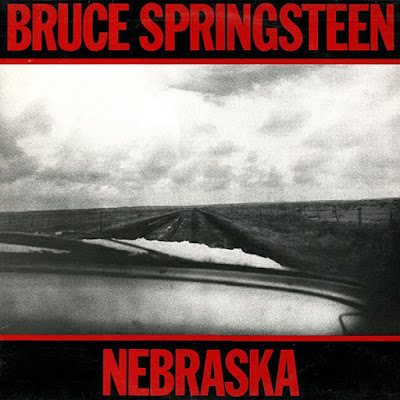 I knew The Boss from the big radio hits. I had heard "Hungry Heart", "Thunder Road", "Born To Run", "4th of July, Asbury Park", "The River". My father had a cassette of "Born In The USA" when it came out, and between listening to it in his car and the endless radio airplay the album received, I knew that record all too well.

Springsteen seemed like a good songwriter, but maybe a little too bombastic, with his giant bar band sounding and seeming kind of dated to my raised-on-new-wave ears.

But everyone talked about how great "Nebraska" was.

After some acoustic guitar, Springsteen opens the album with these words:

Saw her standin' on her front lawn
Just a-twirlin' her baton
Me and her went for a ride, sir
And ten innocent people died


Listening to the album for the first time, I was floored. Instead of loud, overblown rock, this was almost folk or country. The album is famously little more than a 4-track demo, featuring a vocal track or two, an acoustic guitar, and maybe some harmonica or other minor embellishment.

Where Springsteen's other albums were heavily produced, "Nebraska" was lo-fi. Springsteen had hollered from the stage to the cheap seats. Here, he was whispering to you, or sitting right in front of you.

The desperation in his other works was cranked up to gothic maximum here, with no release, no escape, and no future. The songs all told stories or sketched out vignettes. It was like a collection of short stories, all told in the same grainy, blurry black-and-white with bold splashes of blood red that the album's cover displayed.

I put it on a cassette, with Nirvana's "Nevermind" on the other side. It barely left my car's player for a year.

"Nebraska" helped me understand how hard you could hit by barely doing anything. It is a remarkable magic trick.

I had been trying to write songs that were sweeping statements about feelings and the world, and had been increasingly abstracting my lyrics. It wasn't working.

Springsteen, on the other hand, seemed to connect to something universal by being incredibly specific. Where I was trying to draw almost mathematical equations, he wrote stories. He hit hard with just his voice, sometimes barely rising above a whisper, and a guitar. I took note.

Here also were dark, bitter songs that still were hooky, catchy, memorable. Something you could sing along to. Some of the melodies sound like folk songs or hymns. This was an important lesson (and one which it seems Springsteen himself would forget on the similar-but-lesser "Ghost of Tom Joad").

"Nebraska" made me a Springsteen evangelist, and caused me to go back through his catalog with a different and more critical ear. To this day, I tell everyone it is by far his best record.

This album also made me really re-think how I wrote lyrics. Fortunately, I haven't really tried to directly copy this style. I'm not as good a storyteller. I can't pull off Bruce's "I'm just an ordinary guy" pose. And I can't play folk/country acoustic guitar the way he can.

"Nebraska" remains a critical favorite in the rock canon. I hear its influence in countless ways. The entire "lo-fi" movement. All 90s "indie rock". There are many acts who have tried to find a spot somewhere on the spectrum between Leonard Cohen's elegant acoustic despair and Springsteen's 3am Americana. Most don't come anywhere close.

I don't listen to "Nebraska" frequently. It's a bit much for me these days. But it is always in my car and on my phone, and when the mood hits, there's nothing else like it.