Every once in a while, you happen to have that experience while hearing something actually new. 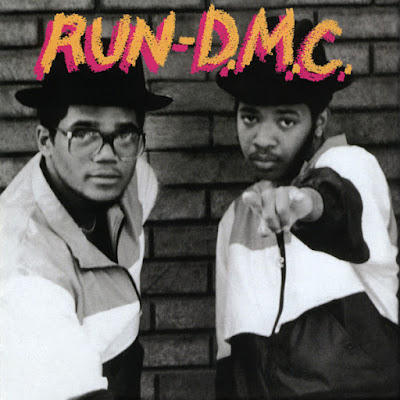 1984. I am 15 years old, and a freshman in high school. Cable TV has not yet arrived in Northern Virginia, so I do not have access to MTV. My exposure to music videos and the exciting world of new music they offer is limited to late-night shows like "Friday Night Videos" and my beloved "RockN'America".

I cannot recall where I first saw the video for Run-D.M.C.'s "Rock Box", but I vividly remember the visceral thrill of hearing it the first time. This was some hard, futuristic stuff.

An explosive drum machine beat hammers as heavy guitars start riffing. And then, instead of post-Plant castrati singing, two black guys start yelling. At first pass, the words are nearly impenetrable. So you listen closer:

"For all you sucker mc's perpetratin' a fraud
Your rhymes are cold wack and keep the crowd cold lost
You're the kind of guy that girl ignored
I'm drivin' Caddy, you fixin 'a Ford..."


They jam 3 or 4 songs' worth of lyrics into the few minutes that "Rock Box" lasts. The lyrics connect to hip-hop's past, define its present, and even point to its future -- there's references of designer brands (though with a populist angle) and plenty of MC braggadocio.

The heavy riffs cycle over and over. There's even a guitar solo.

My brother and I were both captivated and wanted to hear more. We got hold of a cassette (all the store had!) of their debut album, titled simply "Run-D,M.C.". The low-budget album art fit perfectly -- a black-and-white photo of Run and D.M.C. against an urban brick wall, with some primitive computer graphics spelling out their name above.

The album is a masterpiece. To this day I can still recite large chunks of many of the songs, including favorites "Hard Times" and "Jam-Master Jay". Those 3 songs are a powerful start to a record that does not let up start to finish.

Hard times can take you on a natural trip
So keep your balance, and don't you slip
Hard times is nothing new on me
I'm gonna use my strong mentality
Like the cream of the crop, like the crop of the cream
Beating hard times, that is my theme
Hard times in life, hard times in death
I'm gonna keep on fighting to my very last breath


To my teenage self, the songs, sound, and record represented an idealized and imminent future. One where the new technology of drum machines and synthesizers stood next to the legacy of guitars. One where black and white were equal. One where we acknowledged things were tough but we would all move forward together to work through it.

This shining utopia was reflected everywhere I looked. In the futurism of Herbie Hancock's "Rockit". In Simple Minds' having Herbie Hancock play a keyboard solo on "Hunter and The Hunted". In new wave groups whose line-ups, lyrics, and ideologies were the radical inclusivity of their day, with LGBT members and every possible ethnic background not merely "represented", but just THERE, because, duh, it's the future, and it just doesn't even merit remarking on.

Ah, the idealism of youth.

Bills fly higher every day
We receive much lower pay
I'd rather stay young, go out and play
It's like that, and that's the way it is


Listening today, of course "Run-D.M.C." sounds a little dated, juvenile, and silly. But only a little. The stark, minimal production still hits hard. The dual MCs and vocal delays still sound fresh, in every sense.

"Rock Box" was a seminal track, and one whose influence and echoes were felt for at least the next 20 years. Everything from The Beastie Boys' "Licensed to Ill", Ice-T's "Body Count", all of the unfortunate 90s rap-rock, Lil Wayne's "rock" album, Third Eye Blind's debut record, to (arguably) Living Colour owe something to it.

Run-D.M.C. would go on to make more songs like this ("King of Rock", "Walk This Way"), and more commercially successful and popular records. But to my ears, they never exceeded the absolute perfection and power of this first record.

Run-D.M.C. remain somewhat under-appreciated as the avatars (if not progenitors) of many of hip-hop's tropes, awkwardly stuck between hip-hop's corny-but-beloved early years and the "Silver Age" acts of the early sampling era like Public Enemy.

The lack of samples (and use of turntable scratching) still strikes me as a much more exciting place for hip-hop to be than the endless strip-mining of someone else's beats that hip-hop seems to prefer.

I had heard and appreciated rap music before, from the life-changing early singles of Grandmaster Flash and The Furious Five, Kurtis Blow, and Afrika Bambaataa to new wave experiments like Blondie's "Rapture". I thought it was cool and interesting.

But Run-D.M.C. made me understand this was real art, and from that record on, I paid closer attention to what was happening, listening to DC's "urban" stations (WHUR 96.3) just as much as its rock (DC101! Q107!) and alternative stations (WHFS).

Around this same time, I saw a demonstration of breakdancing at my first high school. I made friends with some of the black students there and they taught me how to do some of the moves. Somewhere, there may be public access video of me breaking.

Perhaps most directly, my 2007 album "Decayed, Decayed" was attempt to pay homage to that early hip-hop and its proximity to early industrial and electronic groups. The call-and-response vocals on "Fishwrap" as well as the message of not letting hard times get you down are copied straight out of the Run-D.M.C. playbook.

I still listen to hip-hop, but with flagging enthusiasm as the years roll by. Perhaps it is the creeping cynicism of old age or just old age (pop music is for young people), but while I have heard fringe hip-hop go in some weird (if not particularly interesting or entertaining) directions, mainstream hip-hop seems stuck in either nihilism and/or mopiness masquerading as "deep", brainless, dopey consumerist fantasies, or the occasional inch-deep "message" songs where the videos do all the heavy lifting.

And as recent events have shown, we are far from the utopia my teenage self envisioned.

Still, I and many others will always have a place in our hearts and ears for this brilliant album.

In some ways, Scritti Politti's Green Gartside said it best, in his 2006 song "The Boom Boom Bap". He closes out his lyrical parallels of loving hip-hop and booze to excess by simply running through the song titles of "Run-D.M.C.", his beautiful, soft voice making them sound like treasured possessions or jewels.

He ends by gently singing "I love you still...I always will."

It gets me every time, because that's how I feel about Run-D.M.C. It's a great album, but for me it also represents a missed future, and innocence lost.