Writing about personal influences, it is easy to become preoccupied with selecting works for their signalling value, demonstrating diverse, unusual, or good taste. I have tried to avoid picking things that are too obvious -- there are a pile of canonical records that every rock musician would or could pick (anything by The Beatles or The Rolling Stones or Led Zeppelin, etc.), and a huge assortment of albums that any musician with similar taste or born in similar times would pick.

So it is with Simon and Garfunkel's Greatest Hits. 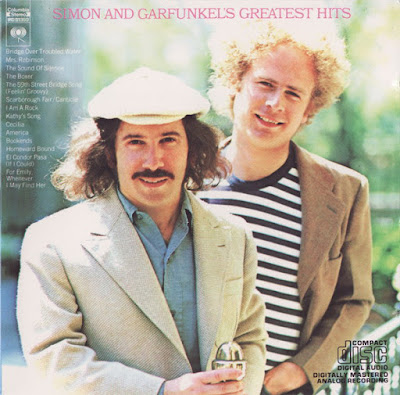 My father was a fan. To this day, "The Boxer" remains one of his favorite songs. It is easy to see why -- its distinctive crashing percussion, oboe solo, lyrics, melody, and hook are strong by any standards.

That is why, when I was writing the first Sid Luscious album, I thought it would be fun and clever to swap Duran Duran's "doo-doo-doos" from "Hungry Like The Wolf" for "lie-lie-lies" from "The Boxer".

But I am getting ahead of myself.

Dad had a cassette of this album, and it was one of a small selection he frequently played in his car. Others included Giorgio Moroder's soundtracks for "Cat People" (with David Bowie!) and "American Gigolo" (with Blondie!). But this was a consistent favorite.

Throughout my pre-driving years, going to soccer games or Saturday tae kwon do or running errands on weekends, I heard this record over and over. I memorized every song.

At first, I just listened as the songs breezed past. Eventually I sang along with the melodies. I began to notice the production details and how they worked with the songs. Then I heard the words, and was struck by how melancholy nearly every song was.

Paul Simon is a tremendously gifted songwriter. He writes great melodies and memorable hooks, without leaning on too many stylistic crutches. I also think he can be an incredible lyricist. Those early songs have a kind of "collegiate blues" that resonate so strongly with young adults and university students, at least from the kind of East Coast suburban background that I knew so well.

Then there are the harmonies. I would (and have) suggest this record to anyone who wants to learn how to write interesting harmonies. These guys do some unusual and interesting things with their harmony choices, and it is one of the most distinctive and memorable parts of their sound, especially when paired with their voices, which are expressive without resorting to yelling or "edge" of any sort.

I don't even have to post clips. You already know what Simon and Garfunkel sound like. Unlike some of the other bands or records I love, they're not weird. They didn't go in unusual directions. They stayed consistent during their run.

This record is not a particularly bold or cool choice. Greatest Hits aren't the right way to listen to music, but I've still heard this one so much when I hear their actual albums, the songs feel like they're in the wrong order.

I still listen to Simon and Garfunkel, and it still gives me chills. "Scarborough Fair" is beautiful and timeless. "The Boxer" is still epic.

When I consider influence, I think of those melancholy lyrics, those beautiful and catchy melodies. I have tried (and largely failed) to get close. I have definitely tried to copy those harmonies from time to time. That sort of thing is a little bit easier to emulate. I dream of writing songs so good, so moving, so timeless. Maybe on my next album (but probably not).

Countless bands owe these guys a debt. REM shamelessly ripped off "Bridge Over Troubled Water" and called it "Everybody Hurts". I hear echoes in other indie groups, and almost everyone with an acoustic guitar.

These days Simon and Garfunkel are used as comedy shorthand -- the "Sounds of Silence" riff used in shows like "Arrested Development" as a kind of parody of feelings first married to music in "The Graduate", then and now, one of the best pairings of music and movie.

British TV show "The Detectorists" even used the album cover as a way to define two characters: